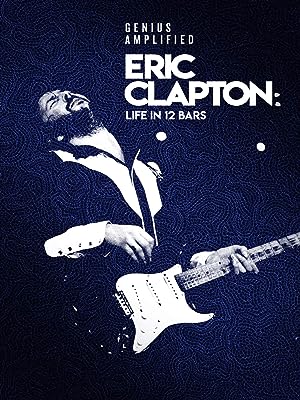 BluesmanReviewed in the United States on June 23, 2018
5.0 out of 5 stars
Life is a journey and Eric has had some major bumps in the road.
Verified purchase
I have been a Clapton fan since my brother brought home the just released John Mayall Bluesbreakers LP and I have bought about everything I could find. I had some disappointing LP that I thought were below his standard and after watching the DVD I can understand how messed up he was with drugs and alcohol. For me, a Clapton fan, this was a good movie to watch and I would recommend it. If you are just discovering his music then you should continue to search for them, this is not really for a beginning fan. I lived through the 60's and I thought this really helped to explain what was going on with him, his bands and the music.
29 people found this helpful

MishaReviewed in the United States on August 4, 2018
5.0 out of 5 stars
history, not performance
Verified purchase
You don't get this dvd because you want concert footage. There ain't none. This is the poignant, powerful life of the man, put into the cointext of history. If you want music, get the '"Clapton at 70" dvd. Get this because you are curious about who Clapton is and the changes he's seen.
23 people found this helpful

Carol S. FaberReviewed in the United States on June 18, 2018
5.0 out of 5 stars
The life of Eric Clapton, warts an all.
Verified purchase
Clapton is the guitar god! This dvd was the story of his life-worts and all! The fact that he survived the drugs and alcohol was a miracle! This dvd is the visual version of his autobiography published several years ago. It was so sad when his mother rejected him at such a young age. His grandparents encouraged him and probably saved him at that point in his life. Later in in his life (sober), loseing his son so tragically he did noI return to drugs/alcohol for solace. I think the blues were always there in some form or another to ground him. Everyone can relate to the blues in one form or another. My brother introduced me to the blues- for that I am greatfull! Also, Erics devotion to staying sober and building and supporting the Crossroads facility to help others get sober-the people who need it most those unable to afford it! I truly believe Eric survived his earlier years for the purpose of helping others in his later years! Thank you Eric for what your music has meant to me in my life! Live is always better!!!!!!
21 people found this helpful

AnonymiceReviewed in the United States on March 29, 2021
4.0 out of 5 stars
Best Clapton Life Bio but Lacking
Verified purchase
Controversy (and my mass confusion) note: Clapton has claimed to have been drunk when he made terrible racist remarks in the later 1970s, and said he had developed into a racist during his severe alcohol years, like it was a temporary condition. He was a *very* nasty drunk. However, apologize as he might, he has continued to heap praise on Enoch Powell, England's most famous anti-immigration fascist, who he claimed to idolize, even as recently as 2007. I could, and had, forgiven what was first reported he said (I didn't hear about this until decades later, probably kept quiet by his record label, etc), and believed his excuse, that it was due to his 24/7 almost fatal alcoholism. I mean, it IS pretty crazy, due to his deep roots and love for Black music, many Black (musician) friends, and relationships with Black women, but I guess the old racists' excuse, "But I have Black friends!" might apply here, that as long as he knew them personally, they were ok, but others not. So now that I've seen his complete, and repeated statements, it was obviously something he had given a lot of, albeit drunken, and sober, thought to (not so "oblivious", as he has said). They are among the most offensive things I've ever heard and I'm deeply ashamed of him. Plus the many opportunities he's had to denounce Powell isn't a good look. While I don't expect artists I love to be perfect human beings, and indeed, the creative mind seems tied to an often dissolute life, these things are too difficult to forget or forgive. He joined Van Morrison on an anti-mask, anti-lockdown single and rhetoric, as people were dying of covid left and right. Just so disappointed in my idol. Idols are created to fall, and while I can forgive them most things, these are not some of them.

However, before all of this came my enduring and now confused love of all things Clapton. It's just so sad, because I modeled my guitar playing after him (his technique is so pure) and my love of blues is almost entirely due to him. I idolized this man from the age of 14 (1967). The Crossroads solo from the live Cream album, Wheels of Fire, is one of the best ever. His solos were like a 747 taking off, and you had to hang on for the ride, but his playing laid back into the rest of the track so completely (unlike many of his contemporaries). He was like no one before. His guitar made a glistening, soulful, masterful, melodic, tasteful, exotic sound, whether a Gibson or Fender. The incredible musical moments and sheer joy he gave me were over and above practically anyone else. Blind Faith. Hearing the Layla album for the first time, not realizing it was HIM, but the wonder when I found out (he AND Duane, what could be finer?!).

This is definitely better than all the budget bios out there, on either Clapton or his bands, esp the ones without music rights, which don't even deserve a mention. There's a lot of music clips, but mostly the main hits and important cuts, but it's more about his life than a discography. But some key events are missing: It doesn't include the aforementioned solo from Crossroads. And for a film focusing so much on Clapton as a man, it leaves out a lot of personal info, which was in his autobiography that this film was supposed made from. And things that had a huge effect on him. Like Duane Allman's tragic death in the early part of Clapton's downward spiral, about a year after Hendrix. It also alluded to George Harrison's many affairs, but the capper was his extended relationship with Maureen Star, Ringo's wife at the time. I believe that was the last straw for Pattie with George, and probably sent her headlong into the troubled arms of Clapton before she realized what had happened to him in the intervening years. This film doesn't even talk about Pattie and Clapton finally getting married, or their divorce. It seems after so much lead up to he and Pattie getting together, you'd think they might have mentioned they got married (before moving onto his son with another woman), which was a whole other weird Clapton story. And how Clapton's rehab led to their divorce, another important item, esp in the context of the theme of this film (rather sad, as he claims to not remember and not to have truly loved Pattie). These things are well chronicled in both Clapton's and Pattie's bios. The film could have been longer, to include these things, with more music. Thus 4stars instead of 5. NOT rating Clapton's politics here.

G. WallaceReviewed in the United States on December 7, 2020
4.0 out of 5 stars
Eventually a rehab flick
Verified purchase
Anybody against rehab? Clapton seems to have made it to the other shore and has spent some of his fortune attempting to help others. Not sure where Ms. Zanuck comes in, but it's a rehab flick. There is some interesting background from Clapton himself and some interesting background from his one-time muse Pattie Boyd, really a blow-by-blow of the artless courtship that led up to his masterpiece "Layla." The discarded Ms. Ormsby-Gore's demise isn't mentioned. Zanuck skimped on copyrights so there is virtually no live film. The one bit of real humor is Clapton's dismissal of the comeback albums (1974-89) which are quickly leafed through with the comment that there were some high points (I won't argue that). I couldn't help but think the music was more interesting when he was in torment but that makes me something of a parasite.
2 people found this helpful

brianReviewed in the United States on April 20, 2021
5.0 out of 5 stars
beautiful documentary...
Verified purchase
I've been a musician most of my life, for over 20 years and being that i'm almost 33 now..
primarily guitar and vocals..
What better a song to conclude this documentary with than Mainline Florida, from the gem-of-an-album '461 ocean boulevard' .. one of my favorite songs by clapton and his band.. Although the documentary doesnt delve much into the deaths of Duane Allman and Stevie Ray Vaughan (and how these impacted Clapton quite a bit), sufficient material was covered with great music and track samples, soundtracking, etc. The guest voices and appearances were amazing as well as lots of video footage that was remarkable and almost surreal. Although this may pan across the world and across the centuries in other icons, truly the people who knew and were involved with Clapton, like George Harrison of the Beatles, Jimi Hendrix, and even the members from Pink Floyd and The Rolling Stones, were members of the aeons to come in rock n roll, blues and experimental musics.. I'll never forget when i was younger, about in my early 20s.. i was doing some open jamming at a record studio down in north carolina with various gentlemen.. and i started taking lead guitar solos, which prompted one of the men to ask me who conveyed that technique to me, to which i replied 'mostly eric clapton..'. He was quick to say how Clapton 'stole the black man's blues'.. - but this Documentary pretty much affirms that deep down in his heart, Eric knew the injustices that were present in Civil Rights, and knew (and he was right) it would be some decades further before proper inclusion of the Blacks into worldwide pop and mainstreams would be adequate. ... God Bless Eric Clapton and his many musical friends and counterparts who brought such great music and cultures into our world !!

Jerry J. NestorReviewed in the United States on October 19, 2018
5.0 out of 5 stars
If you love the truth of a compelling life, then get this documentary!!
Verified purchase
There is nothing about this Documentary I didn’t like. Here’s a story of a unbelievable gifted musician. To see the self destruction and also the redemption of a person’s life is very enlightening. I had tears in my eyes after watching this. It can be hard to watch but the reward I felt was worth watching every minute. Thanks Eric Clapton for your strength in allowing this to be shown!!!
5 people found this helpful

DA ElfReviewed in the United States on February 21, 2018
5.0 out of 5 stars
Nearly TOO personal
Verified purchase
At times an intensely uncomfortably naked and raw look into another person's life. Pulls no punches. If this was interesting to you, I also suggest: "Long Strange Trip" and "All things Must Pass", about the era and life around the Grateful Dead and about Tower Records and it's era, respectively.
16 people found this helpful
See all reviews
Back to top
Get to Know Us
Make Money with Us
Amazon Payment Products
Let Us Help You
EnglishChoose a language for shopping. United StatesChoose a country/region for shopping.
© 1996-2021, Amazon.com, Inc. or its affiliates