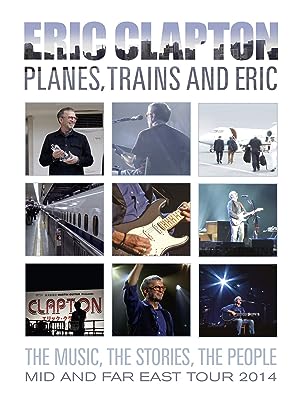 (435)7.22 h 25 min201416+
Eric Clapton is one of the most revered guitarists of all time. From his early days with the Yardbirds, through John Mayall's Bluesbreakers, Cream, Blind Faith, Derek And The Dominos and on to his solo career he has had consistent critical and commercial success. "Planes, Trains And Eric" follows Eric Clapton and his band on the Far and Middle Eastern leg of his 2014 World Tour.

longislandbobReviewed in the United States on November 6, 2014
5.0 out of 5 stars
Old Time fan, really likes this one!
Verified purchase
I just received and finished watching my EC DVD. I didn`t have high expectations, reading the set list beforehand, and reading a reviewer previously, who thought Eric was going thru the motions, I was prepared for a ho-hum, dry film. I can say that I was very pleasantly surprised, and really enjoyed this one. I have been a fan for over 40 years, ever since I started seriously getting into music. He is the main reason I took up the guitar 35 years ago. In the last 10 to 15 years, despite being a hard working musician, Clapton has admittedly become artistically "lazy" ( his words) it`s why he hasn`t written many songs lately. And at times he does seem at times to be going thru the motions and unwilling to push his talents. Happily that is not the case here, he definitely is not going thru the motions. He plays some superb solo`s and plays with verve. So this makes up for the standard material ( it would be great if he came up with some new songs tailor made for the concert experience). I could do without Tears in heaven ( a beautiful song, but too much of a downer for a live concert) and also Cocaine. But the solo on I Shot The Sheriff is great, that song always brings out his talents, and he goes above and beyond on this one! I think these performances really shine in the DVD mode, as opposed to seeing him in an arena. His setlist really is made for a club or theatre situation, so the film puts you front and center, so you can appreciate it more as opposed to sitting in Madison Square Garden 200 feet away. Also the behind the scenes really gives a feeling of comraderie and closeness Eric has with his bandmates. You can see what a nice guy Clapton is. He is very close with the Japanese Promoter, Mr. Udo. I think this film captures something, basically that Eric can still really play, and that he`s a nice guy. So this longtime EC fan really appreciates it and gives it a thumbs up!
45 people found this helpful

AnonymiceReviewed in the United States on October 1, 2018
2.0 out of 5 stars
Shuffle Versions of Rock Songs, Plodding Tempo Hurts This One; Not Eric's Best
Verified purchase
I have been a Clapton Superfan since the 60s but I haven't loved what I have heard since From the Cradle, barring a concert here or there or musical event. I have seen a few bands end up like this one. Ploddy old guys, most of them. The piano player is the main ploddier and he detracts horribly. Makes the performance worse than Spinal Tap-ish and I have to wonder does it embarass Clapton, for he looks pretty with it, but can't tell with this ploddiness. The set consists of classic Eric songs but he's snuffed most of them out by shuffling them down in temp. Well, it works with Layla, to some degree, at least when that version was new, but now it is getting oldish. They need to unshuffle the beat, speed up a bit, then burn down some barns and get some life in. Not for all of course, but rockers like Layla, Why Does Love Got To Be So Sad, Crossroads, even Cocaine, which was "shuffled" early on, but the hit record is fast and committed. It's mostly losing the quick spark of youth, slight delay in movement which marks the elder statesman. Step behind. Same thing has happened to Fleetwood Mac (2016) and was happening to Tom Petty, right before he died. It's too sad. I have measured music weeks, summers, years, decades by Clapton since 1965. Cream was my favorite band, hand's down. I used to say that if they came to my city, I would "crawl across the floor to the stage to you" (and that was before Layla). But they never came. At least after I was turned onto them by a classmate, before they got a lot of radio play; once they did, game over for everyone else. Cream was in the sky, all other bands down below. I do hope Eric makes band adjustments and keeps on going. I think if he has a fresh, youngish band, he has a few years in him yet.
2 people found this helpful

TechnutReviewed in the United States on November 12, 2014
5.0 out of 5 stars
BRAVO!!!
Verified purchase
Bravo! This movie is well made and fresh- the music is crisp, clear and wonderfully recorded. The documentary is like a conversation with your Uncle - its a fresh look at an amazing artist! Eric is amazing as ever and I loved the guitar closeups - Its like watching magic - you can see it over and over but really have no idea how he does it....but you love it and your immensely entertained!
Great Job Dave Maxwell for keeping it real - Thank you for taking us on tour to see some legendary performance's and letting us sit in on some honest conversation with our idol!
2 people found this helpful

KOIReviewed in the United States on February 21, 2019
2.0 out of 5 stars
Meh....
Verified purchase
His acoustic version of Layla on this is the best he's ever done, but other than that, mostly just a few interesting bits of history. As much as I love Clapton, I wouldn't buy it again.

JantoniceReviewed in the United States on November 6, 2014
4.0 out of 5 stars
Very different Clapton film.
Verified purchase
Very different Clapton concert film. The film includes 14 songs intermingled with interviews, traveling and backstage activities. I loved the version of Before you accuse me and Key to the Highway. Chris Stainton plays wonderfully throughout the concert. There is a really cool transition effect from cartoon to concert film used throughout the DVD. My biggest complaint is Clapton's catalog is immense and why does he continue to push out songs that we have heard over and over again. Long time fans would love to hear either new material or songs he has not recorded live. One last observation: Clapton does all the guitar work. There is no second guitar player pushing him. As a result the playing lacks energy on certain songs. I will end this review stating I stll gave it 4 stars. The band is tight, the arrangements well done and the filming is excellent!
7 people found this helpful

Kevin DauphineeReviewed in the United States on March 28, 2015
5.0 out of 5 stars
Intimate insight
Verified purchase
A treasure. Having seen EC in Asia a number of times, I can relive those years through this touching recognition of his appreciation for Japan in particular and Asia at large. We've all come a long way. Don't dismiss the interviews with the band and staff. "Driftin' Blues" shows the master at his craft with such feeling, it's indescribable. Add this to your collection!

BUDDYEXCELLENTReviewed in the United States on January 31, 2015
5.0 out of 5 stars
it was really nice to watch
Verified purchase
Eric was emotional about the 40 year friendship in Japan, it was really nice to watch, they love him ! the Japan people helped Eric thru his crazy difficult times. he will keep going there to see his friends and play for them as long as he lives. I would love to visit there !

David MargulesReviewed in the United States on December 26, 2014
5.0 out of 5 stars
Eric Clapton winding up as he's winds it down...
Verified purchase
This is truly a gem!!! I own everything pretty much that he has ever done, and scene Eric more than 80 times and have the privilege of meeting him several times!
This is an intimate documentary and live performances that never been approached quite like this in any other form.
If your a Clapton fan or not this is a great Blu-ray to own, and to turn your friends on too...