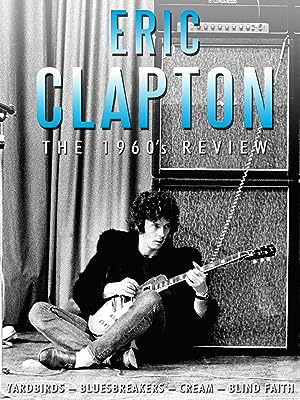 (17)
7.12h201013+
In this extraordinary film, his life and career throughout these crucial ten years is put under the microscope, and with the help of archive interviews with the man himself, exclusive contributions from friends, band mates and colleagues, rare and classic performance footage, seldom seen photographs plus a host of other features, the story in question is told in a manner it never has been before.

ukemanReviewed in the United States on October 16, 2020
4.0 out of 5 stars
Spot on
Verified purchase
I was a young teen in SF when EC was in had left Yardbirds, and was treated to Bluesbreakers which made an indelible impression on me, lasting though his stints with Cream and Blind Faith. At the time I felt none of the myopic fandom of those latter groupings, which tended to put EC under a microscope, whereas the Bluesbreakers material was such a well rounded showcase of the genre for EC's guitar playing. Nonetheless this is a great doc accentuating the young EC's work in one memorable decade.

Buddy1492Reviewed in the United States on March 27, 2021
4.0 out of 5 stars
Clapton at his best
Verified purchase
I would have liked a little more music. There are a few clips of old interviews with Clapton, but he wasn't interviewed as part of this movie. It gives a clear picture of his origins, when he was completely immersed in blues, and how he progressed, moving from band to band throughout the 60s. The people they interviewed were part of it while it was happening and provide valuable insights.

William C. MalvenReviewed in the United States on March 5, 2019
4.0 out of 5 stars
Generally excellent bio of Eric Clapton's early years
Verified purchase
Show tracks the early years of Clapton's long and varied career. Not a lot new here but some tidbits of information I've not heard before. Good production and well worth watching for any fan of Eric Clapton.
2 people found this helpful

Absorbing it all.Reviewed in the United States on October 26, 2019
5.0 out of 5 stars
One of the best guitar players of all times.
Verified purchase
Good bio of the early days of Eric, cream, touching on Hendrix coming into the UK music scene .
Conclusion: Even to this very day in oct 2019 Eric has a his own style few can match but he makes anyone who plays with him ,Shine Brighter With Him.

Amazon CustomerReviewed in the United States on March 22, 2019
5.0 out of 5 stars
A must see for Clapton fans
Verified purchase
Lots of info about Clapton's early days. Worth checking out for sure>
One person found this helpful

mikeinunionReviewed in the United States on November 2, 2019
5.0 out of 5 stars
Tons of info
Verified purchase
Very thorough
See all reviews
Back to top
Get to Know Us
Make Money with Us
Amazon Payment Products
Let Us Help You
EnglishChoose a language for shopping. United StatesChoose a country/region for shopping.
© 1996-2021, Amazon.com, Inc. or its affiliates