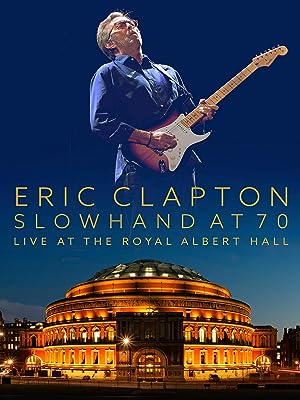 Eric Clapton Slowhand At 70 Live At The Royal Albert Hall

(1,354)
8.31 h 46 min2015G
Slowhand at 70 captures a momentous night for the legend that is Eric Clapton. This is a night to remember and the viewer lives and breathes the full experience having been encapsulated in the live performance as one of the honoured fans at the venue. The artist brings it home, literally, to this his second home, the Royal Albert Hall.

Included with Qello Concerts on Amazon for $7.99/month after trial

Watch with Qello Concerts
Start your 7-day free trial
Add to
Watchlist
By ordering or viewing, you agree to our Terms. Sold by Amazon.com Services LLC.
Write review

Michael TrimbleReviewed in the United States on April 22, 2021
5.0 out of 5 stars
A performance for the ages
Verified purchase
This is quite probably my all-time favorite live EC performance for several reasons:
1. The EC + Steve Gadd + Nathan East is my favorite trinity of all his band rosters.
2. EC seems relaxed and perfectly at home in what he has described as his favorite venue, the RAH, where he has performed over 200 times, and with the familiar material chosen.
3. With no other guitarist on stage, EC handles both rhythm and lead with consummate skill and creativity. It's obvious he is enjoying himself as a sideman while graciously sharing the limelight with keyboardists Stainton and Carrack. (In an interview EC once said the rhythm work is the mark of a real guitar hero.) Even his solos are constructed to carry the groove along with the lead so there are no thin spots. (If anyone wonders why Andy Fairweather Low wasn't on stage, it's because his band was the opening act.)
4. Although the song list doesn't contain any surprises, EC brings fresh interpretations and grooves to familiar favorites, and the short acoustic set provides a nice change of pace while showcasing his prodigious acoustic skills. Both East and Carrack get the lead vocal spotlight for two songs. The flow of the whole show is nice and does actually seem like a birthday celebration of a remarkable career that helped define a generation.
Incredibly, EC seems to be at the top of his game at 70. The guitar work is impeccable and I am struck over and over by how much better he is at vocals than he was 30 or 40 years ago. This is a master journeyman at work, without even breaking a sweat. Very cool.

SD CardsmithReviewed in the United States on June 1, 2018
5.0 out of 5 stars
Nothing better than this!
Verified purchase
Nothing better than this! I've been listening to EC since the Cream days and this recording and dvd are top notch. Great versions of the songs, the band and recording quality are amazing. Very very pleased with this purchase and the price is very fair for what you receive. Very rare in today's world.

If you are a musician, it's great fun for jamming to! My Clapton songs are improving thanks to this.
Thank you EC and all involved to make this happen!

richlifeReviewed in the United States on September 18, 2017
5.0 out of 5 stars
Clapton Remains the Best
Verified purchase
Others have described the content -- I will simply add that I'm loving Clapton's easy going style and his fantastic guitar finesse at an age where I can't even fully close my fingers. There is every reason from me to continue my long time admiration admiration for this virtuoso player and his finely developed voice and vocal stylings.
17 people found this helpful

gmouseReviewed in the United States on October 3, 2021
3.0 out of 5 stars
Clapton still great; not his best work
Verified purchase
This concert video shot at the Royal Albert Hall shows that Clapton still has the transcendent talent that has always set him above other guitar players. His ability to wring beautiful and emotional music from an electric guitar reveals a gift above the mere technical ability of a Malmsteen, a Hendrix or a Van Halen.
However, this performance does not show Clapton at his best. Firstly, he uses a backing band with two keyboard players who are mixed way too loud and play way to much. Clapton is well known for his generosity in giving room for other musicians he plays with to shine. However, people come to concerts to hear Clapton, not the sidemen talented as they may be.
Secondly, the set list is a mixed bag of the good, the ok and the dreadful.
High points: blues classic "Hoochie Coochie Man", Cream classic " Crossroads" and Joe Cocker's "It's Time We Went". Ok but not the best: "Cocaine" on which Clapton shines but the band intrudes. A surprise: "I Shot the Sheriff". I was never a fan of Clapton's cover of this Bob Marley tune, especially with Yvonne Elliman squeaking away on backing vocals like a demented rodent. However on this occasion, the arrangement was tight, Clapton eschewed the fake Jamaican accent and the backup singers enhanced the song. Dreadful: Clapton insisted on inflicting the terminally lame acoustic version of "Layla" on the audience. The original electric version has been a standout effort for Clapton since its release and is generally regarded as one of the great classic rock anthems. It may be true, as rumored, the the acoustic version is how Clapton originally thought of the song. If so, next time you have a thought Eric, let it go.
Finally there is "Tears in Heaven". Though this song qualifies for the dreadful category with its relentless mawkishness( and every synonym in the thesaurus), I have to give Clapton a mulligan in that it is an expression of the terrible pain he experienced from the tragic loss of his son.
to

To sum up: this is not one of the great performances that show off Clapton's talent. Enjoy it for the opportunity to see a brilliant musician perform, but expect to be a bit disappointed in the arrangements and the set list. He's done much better and will no doubt do better in future.
One person found this helpful

DiegoReviewed in the United States on February 15, 2018
5.0 out of 5 stars
Great Concert, Great Sound Quality, Great Performance by the whole band, definitely worth the money!
Verified purchase
This concert is really high quality, the visuals are good but most importantly the sound quality is excellent, I thoroughly enjoyed listening to the entire concert in one go because I was amazed by it, Eric Clapton played beautifully as did the rest of the band, in particular I highly enjoyed Nathan East's performance, his skills as a bassist really shined through. If you enjoy great music and specially if you are a fan of guitar then do yourself a favor and buy it.

I highly recommend you have a good sound system setup so you can enjoy this properly!
10 people found this helpful

Karl ThorssonReviewed in the United States on March 19, 2017
5.0 out of 5 stars
This is just AWESOME..
Verified purchase
This is just AWESOME... make sure you have DTS or DOLBY 5.1 rigged in your home. The next best experience is to actually be at the ROYAL ALBERT HALL and see EC and his amazing band.
11 people found this helpful

AmhamReviewed in the United States on September 9, 2016
5.0 out of 5 stars
EC is amazing no matter his age
Verified purchase
What can be said? EC is amazing no matter his age. Definitive Blues/Rock, none better. The BluRay video print is very good, although the directors video shots can be argued. EC's guitar level/placement was not prominently mixed, it needed to stand out much more forward and louder in the sound mix, the equal to his voice mic. Nonetheless, amazing musicianship!
6 people found this helpful

pablo paguiaReviewed in the United States on August 28, 2021
5.0 out of 5 stars
A legend is a legend.
Verified purchase
He truly is a masterpiece of music and guitar playing. He did it all and been with different kind of musicians and recorded with them, he is the man and the music of the rock generation. Pablo Roberto Paguia.
See all reviews
Back to top
Get to Know Us
Make Money with Us
Amazon Payment Products
Let Us Help You
EnglishChoose a language for shopping. United StatesChoose a country/region for shopping.
© 1996-2021, Amazon.com, Inc. or its affiliates