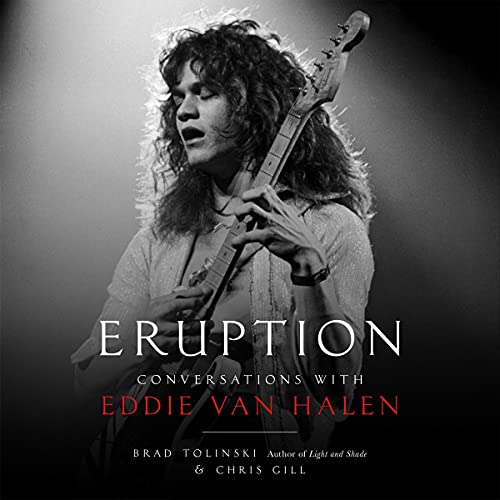 Get a completely new look at guitar legend Eddie Van Halen with this groundbreaking oral history, composed of more than 50 hours of interviews with Eddie himself as well as his family, friends, and colleagues.

When rock legend Eddie Van Halen died of cancer on October 6, 2020, the entire world seemed to stop and grieve. Since his band Van Halen burst onto the scene with their self-titled debut album in 1978, Eddie had been hailed as an icon not only to fans of rock music and heavy metal but to performers across all genres and around the world. Van Halen’s debut sounded unlike anything that listeners had heard before and remains a quintessential rock album of the era.

Over the course of more than four decades, Eddie gained renown for his innovative guitar playing, and particularly for popularizing the tapping guitar solo technique. Unfortunately for Eddie and his legions of fans, he died before he was ever able to put his life down to paper in his own words, and much of his compelling backstory has remained elusive - until now.

In Eruption, music journalists Brad Tolinski and Chris Gill share with fans, new and old alike, a candid, thoroughly enjoyable, and definitive oral history of the most influential rock guitarist since Jimi Hendrix. It is based on more than 50+ hours of unreleased interviews they recorded with Eddie Van Halen over the years, most of them conducted at the legendary 5150 studios at  Ed’s home in Los Angeles. The heart of Eruption is drawn from these intimate and wide-ranging talks, as well as conversations with family, friends, and colleagues.

In addition to discussing his greatest triumphs as a groundbreaking musician, including an unprecedented dive into Van Halen’s masterpiece 1984, the book also takes an unflinching look at Edward’s early struggles as young Dutch immigrant unable to speak the English language, which resulted in lifelong issues with social anxiety and substance abuse. Eruption: Conversations with Eddie Van Halen also examines his brilliance as an inventor who changed the face of guitar manufacturing.

As entertaining as it is revealing, Eruption is the closest listeners will ever get to hearing Eddie’s side of the story when it comes to his extraordinary life.

Special invitation from Audible!
Learn more about Membership
List Price: $29.65
You Save: $3.71 (13%)
By completing your purchase, you agree to Audible’s Conditions Of Use
Sold and delivered by Audible, an Amazon company
Share

4.9 out of 5 stars
4.9 out of 5
281 global ratings
How are ratings calculated?
To calculate the overall star rating and percentage breakdown by star, we don’t use a simple average. Instead, our system considers things like how recent a review is and if the reviewer bought the item on Amazon. It also analyzes reviews to verify trustworthiness.

NYGuitarist
5.0 out of 5 stars The ONLY Eddie Van Halen book you need
Reviewed in the United States on October 9, 2021
Verified Purchase
This book is the definitive biography of the greatest guitarist of our generation, Eddie Van Halen, and the closest thing we will ever have to an autobiography from the genius. This is his complete story, told mostly in his own words, with some historical background and new input from people very close to him. Anyone who brushes this book off with a pithy "meh" evaluation isn't a true fan. It's like saying Eddie was an okay guitarist.

Eddie's biggest fans may recognize a lot of this material. I did, but I've read every magazine interview and book I could find on him (and this book is by far the best of all of them). Diehard fans should view this as the written equivalent to a band's box set: there are the greatest hits everyone knows, a lot of deep cuts that the fans love and enough unreleased material to make the purchase worth it. I was actually surprised by how much new material there was - several unpublished photos, info on Eddie's obscure guitars, illuminating new interviews with Michael Anthony, Gary Cherone, Ray Danniels (worth the price of the book alone), Steve Lukather and Steve Vai, and even quotes from Eddie that I had never seen before (like what actually happened to the "Hot For Teacher" Flying V).

Reading the interviews with Eddie, I felt like I was in the room with him. I also liked how the interviews were arranged chronologically, unlike the Guitar World collections that often jumped all over the place. When I finished, I felt like I knew Eddie better than ever before and I also understood just how big his contributions to music were. He really was a giant, and the authors stated.

There's another "Eddie Van Halen Story" that I bought that came out recently in England. If any book is "meh" that one is as it focuses on the gossip and breezes over the genius. The authors of this book truly get Eddie, and they gave Eddie his only opportunity to tell his own story in his own words. This is a book to give to your friends who don't see what all the fuss about him is about, or to pass down to your children and grandchildren to teach them about one of the greatest musical geniuses of our lifetime. Eddie reached well beyond playing guitar and writing songs. He also changed the direction of the guitar itself. Hendrix was a great genius too, but even he didn't accomplish that.

Bookjunkie
3.0 out of 5 stars Meh
Reviewed in the United States on October 7, 2021
Verified Purchase
If you are an EVH fan you have probably read much of this before. Nothing much new here but some good tidbits that were new to me. Also, it sounds to me like much of Ed's commentary was edited by the authors, Ed never sounded that sophisticated and concise in his life! I don't like that they screwed with the language. Also, there's quite a bit of REDUNDANCY here, something said on this page and then again on another and another. If you said it once that should be enough, seems to me like filler. If you don't know much at all about Edward Van Halen than this is a great book for you. You would think that the selling point of "50 hours of UNRELEASED interviews" would have yielded some really great new info, but no.
Read more
10 people found this helpful
Helpful
Report abuse

Washington Viewer
5.0 out of 5 stars Definitive and Authoritative "Biography"
Reviewed in the United States on October 9, 2021
Verified Purchase
Eruption is an authoritative account of Van Halen - the man and the band - written and assembled by esteemed journalist Brad Tolinski (former Guitar World editor) and Chris Gill. The book comprises new narrative accounts of Edward's life in music, as well as excerpts from several previously-available interviews with folks from Van Halen's world.

Overall, Tolinski and Gill do a wonderful job assimilating information from a variety of sources to create a compelling and readable account of Eddie's life with a distinct narrative arc: from Eddie's humble beginnings as a young Dutch émigré, through early years of fame and excess, to later sequestration and redemption. The importance of family is a key theme throughout the book, as is Eddie's perennial struggle with shyness, anxiety, and substance abuse. The book is laden with insight into Eddie's music and guitar innovations, as well has his recurrent conflict with bandmates and industry expectations.

Highlights include interviews with Van Halen manager Ray Daniels - who guided the band through the tumultuous 90's - and vocalist Gary Cherone, whose candor and introspection helped paint a very human and fallible portrait of our favorite guitar hero in the best and worst of times. Is it finally time to admit that Van Halen III featured some of Eddie's most devastatingly beautiful guitar work?

A must-have for casual and die-hard fans alike, "Eruption" is a snapshot of what made Eddie Van Halen tick: what inspired him, fed his insecurities, gave him hope, and provided him solace. A reclusive genius, Eddie's humility and obsessive dedication to his craft were keys to his success and - paradoxically - his Achilles' heel. In the end, two things mattered: his family and his music. A fitting tribute to a beautiful and flawed man, my hero and a hero to millions who find peace when fingers touch strings.
Read more
7 people found this helpful
Helpful
Report abuse

Lgbchgal
5.0 out of 5 stars Outstanding!
Reviewed in the United States on October 11, 2021
Verified Purchase
A book that honors the memory of Eddie Van Halen. I grew up listening to Van Halen but was never what I would call a “huge fan”. I learned a lot about Eddie’s life and his music from this book. I recommend you read this book. I know there are others out but they don’t pay homage to Eddie the way this book does.
Read more
4 people found this helpful
Helpful
Report abuse
See all reviews

James
5.0 out of 5 stars Must-buy for EVH fans
Reviewed in the United Kingdom on November 4, 2021
Verified Purchase
If, like me, you read all the guitar magazine interviews with EVH, you'll still find new conversations… and plenty of things you'd forgotten! All put together with great care, this is a wonderful book.
Read more
Report abuse

Douglas Young
5.0 out of 5 stars Candid conversations with Eddie Van Halen
Reviewed in Canada on October 24, 2021
Verified Purchase
Good book, well written with interesting information about him, his life and how he became the unique and influential guitarist of the late 70's, 80's and on into the 90's.
Read more
Report abuse

garry a.
3.0 out of 5 stars same old same old
Reviewed in Canada on October 25, 2021
Verified Purchase
if you have not read guitar mags about edward this is a book for you but for me alot of the same stuff from the mags I have. some cool guitar pics
Read more
Report abuse

Deanne Butcher
5.0 out of 5 stars Great book!
Reviewed in Canada on October 25, 2021
Verified Purchase
First book came with the cover ripped and they had a new one out to me within the week
Read more
Report abuse
See all reviews
Back to top
Get to Know Us
Make Money with Us
Amazon Payment Products
Let Us Help You
EnglishChoose a language for shopping. United StatesChoose a country/region for shopping.
© 1996-2021, Amazon.com, Inc. or its affiliates