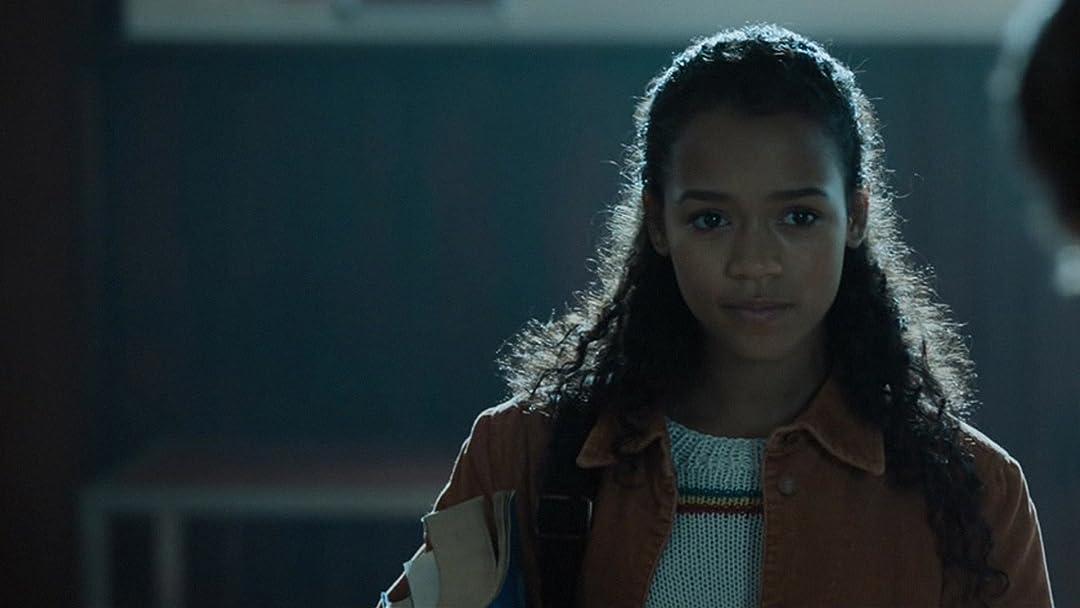 Joey McManusReviewed in the United States on April 9, 2019
5.0 out of 5 stars
A higher budget Cube
Verified purchase
I actually bought this and was not disappointed as I thought it was worth what would be the price of a ticket at a movie theater. The first three-fourths of the movie is pretty intense and clever problem solving. Great production value and decent acting (fun seeing the actress that plays Jessica from True Blood in something else!). The movie falls apart a little towards the end but not in a way that ruined anything for me. Not gross or gory, very solid thriller.
49 people found this helpful

RichReviewed in the United States on April 24, 2019
1.0 out of 5 stars
Escape This Movie!
Verified purchase
I couldn't wait to see this movie when I saw the previews, but I am bummed! I was on the edge of my seat the entire time, (1h 39min) loving every minute of it and couldn't wait to see how it was going to end, but unfortunately the ending killed it! I couldn't wait to write good things about this movie and how I wanted to see another one, but now I don't even want to give this one star. This is just another stupid version of Saw that many people will probably like, but not me. I want something new and original for once. I thought this was going to be it, but wasn't. I don't recommend this movie at all.
28 people found this helpful

Mark O.Reviewed in the United States on May 8, 2019
3.0 out of 5 stars
Idea that's been done before.
Verified purchase
I read the reviews and I was intrigued even though the basic idea of the movie has been done before. An unknown organization is studying people put into a bad situation, for unknown reasons, where the people/human guinea pigs must struggle to survive or be killed if they fail the situational tests. I've seen this same kind of movie with the "Cube" movies as well as a couple of other movies where people are trapped inside an office building and forced to survive by killing each other or cheating other people to survive the situation. It's now an overused concept.

In this movie there are a number of unrelated people that are sent mysterious "invitations" to participate in an "Escape Room" where the winner takes home $10,000. Sounds OK, and even I'm intrigued enough to want to see what's up with this offer. They arrive at a large, business building complete with a single security guard at the reception desk - yeah, the building looked empty for a large office building, and only one security guard for such a large building seemed very suspicious to me.

They take the elevator to an upper level floor and enter an office with a large waiting area and a receptionist who is behind a opaque "closed" window who rudely doesn't even open the window to check people in, just tells them to come in. Again, very suspicious, but, the competitors don't seem to notice. They include one competitor who is the only one who has participated in such competitions so that he can inform the others what is going on and how to play the game. Otherwise, all of them would have been killed in the very first challenge. That made me suspect him as the "plant/mole." I won't spoil it by saying whether or not he is or isn't a plant.

Long story short, the competitors get into the competition unexpectedly and then every one of the Escape Rooms seems to have a limited amount of time to figure out or die. The good and the bad human survival characteristics come out of each of the competitors. It's an OK movie and things are revealed as to their seemingly unrelated connections to each other a little over half way through. In that respect, it is light years better than the stupid "Cube" movies that do not give any explanations at all about what is happening.

SPOILER ALERT
The Bad: Like the "Cube" movies, the people behind the "Escape Room" would have had to expend hundreds of millions of $ to make that supposedly dilapidated high rise building look "new" and add working "new" elevators, run power to the building, create the various rooms with moving ceilings/walls, and all the expensive furniture/props, and that "ice lake" room would have cost millions of $ alone. That's an unbelievably stupid amount of money that no one would expend just to study people's survival reactions and actions. And also, it would take months of construction to remake that building and yet the police never find out that it was done??? Furthermore, it would have taken months for them to completely deconstruct the entire building (removing all of the items they put into it) and make it look empty and dilapidated. Yet, when the cops enter the building, they don't seem the least bit suspicious that a dilapidated, empty, building has new looking, fully working elevators?????????

For these reasons I gave it 3 stars (these inconsistencies would have lowered it to a 2 1/2, but, that's not an option) instead of 4. The actors were good and the direction better than other, similarly themed movies. In fact, the budget was obviously much better than other similar movies and is evident in the sets as well as the quality of actors.

astReviewed in the United States on April 12, 2019
5.0 out of 5 stars
Worth Watching
Verified purchase
This was a very good movie from start to finish. I was hesitant to buy it because of some low reviews, but I am glad I did. It is an adrenaline paced movie with high and low tempos that work.

Melanie FuifuiReviewed in the United States on April 12, 2019
4.0 out of 5 stars
WOW!!
Verified purchase
all i can say is wow!!! this movie ws pretty good to me had me a little mad at the end but it was really good. I was on the edge of my seat with this one! i took one star away because of the ending.
21 people found this helpful

joel wingReviewed in the United States on April 28, 2020
3.0 out of 5 stars
Fun to watch but not that original
Verified purchase
The idea of a group of people being dropped into a deadly house that was out to get them has been around forever. 2019’s Escape Room was the latest version. The movie had six people from different backgrounds being invited into a competition for $10,000. They enter a room which unknowingly begins the game for their lives.

There is nothing original about the concept of the film. Each room they are in has a series of clues they must find and solve before they die. The first room for example begins going when one of the character pulls off the exit door handle, which reveals a thermostat. One of the characters sees the book Fahrenheit 451 and thinks the temperature should be turned to that degree. That actually turns on a series of heaters that are going to raise the temperature to 451 degrees. They have to find the way out before they are cooked alive.

While it’s exciting to see the players go through the rooms you can see obvious influences, especially at the end. One of the first things I thought about was Saw.

Overall, fun to watch, but not that original.
C
3 people found this helpful

Addicted2Amazon!Reviewed in the United States on June 27, 2022
3.0 out of 5 stars
Escapist PG-13 Puzzle Horror Flick That's Mostly Enjoyable
Verified purchase
I enjoyed this one. It's basically a cheesier, no-gore, PG-13, higher-special-effects-budget version of "Saw" or "Cube." Yes, the premise has been done before by the two aforementioned flicks. This movie takes the real-life escape room trend of the 2010s as inspiration to basically create a movie that revisits those earlier horror film plots.

And I really enjoyed this! Or rather, I enjoyed everything up to the reveal and very end. It was quite suspenseful, action-packed, creative within the theme, and interesting. I liked and related to the characters, and was rooting for them. The special effects looked great and gave me a lot of anxiety (in the welcome, entertaining way!). The film looks really good and is a lot of fun. Fun sets and traps, er, I mean, rooms?

But when the reveal and end came....oh boy, talk about it taking you out of the film. I will not spoil it, but this premise alone already requires a suspension of disbelief of course. But the end unfortunately wandered into territory that reminded me of the 2nd "Unfriended" movie, the sequel, if you've seen that. (And if you haven't, don't. It's not very good lol.) The ridiculousness went from 7 out of 10 to a 100 out of 10. And I knew if they created a sequel, they would walk that ending piece back, ret-con it or ignore it because it's just too ridiculous.

So for most of this film, 4 stars. But then that ending. I couldn't help but compare it to how "Saw" ended, which was disturbing, surprising, and pretty unforgettable...and then there's this ending. Blah and definitely done before (and better)... then that last 5 minutes or so - WHAAT?? Yeah, OK. Y'all overreached. These script writers need to lay off the substances lol

JatoReviewed in the United States on December 9, 2021
3.0 out of 5 stars
Reminds me of something...........
Verified purchase
Hmmmmmm, what could it possibly be....? Now that I've seen the first one it nawed at me but I wasn't quite convinced then it was going to be another franchise, and then seeing second one.... it hit me like a bloody light bulb.... in fact at the end of the second one it kind of throws it in your face at one point. "Wanna play a game," the whole psychological idea that people either want to be the villain or the hero is something that is innate in all of us and putting people in these types of situations brings out that sort of sensibility that those people have hidden. It's the same with the psychology of The Walking Dead everybody wants a free excuse to kill each other and not have to face consequences. Of course they'll face some consequences, some psychologically, some mentally, some emotionally. But I'm talking about going to prison and dealing with consequences to that extent they don't have to in most shows like that they can pretty much do whatever they want. Plus people yearn for a simpler life but I digress this movie was really good it was a bit repetitive and predictable in some parts and it had some really whacked out rooms in them and some really cool clues that there is no way that I could ever figure out so no I don't want to play a game.
See all reviews
Back to top
Get to Know Us
Make Money with Us
Amazon Payment Products
Let Us Help You
EnglishChoose a language for shopping. United StatesChoose a country/region for shopping.
© 1996-2022, Amazon.com, Inc. or its affiliates