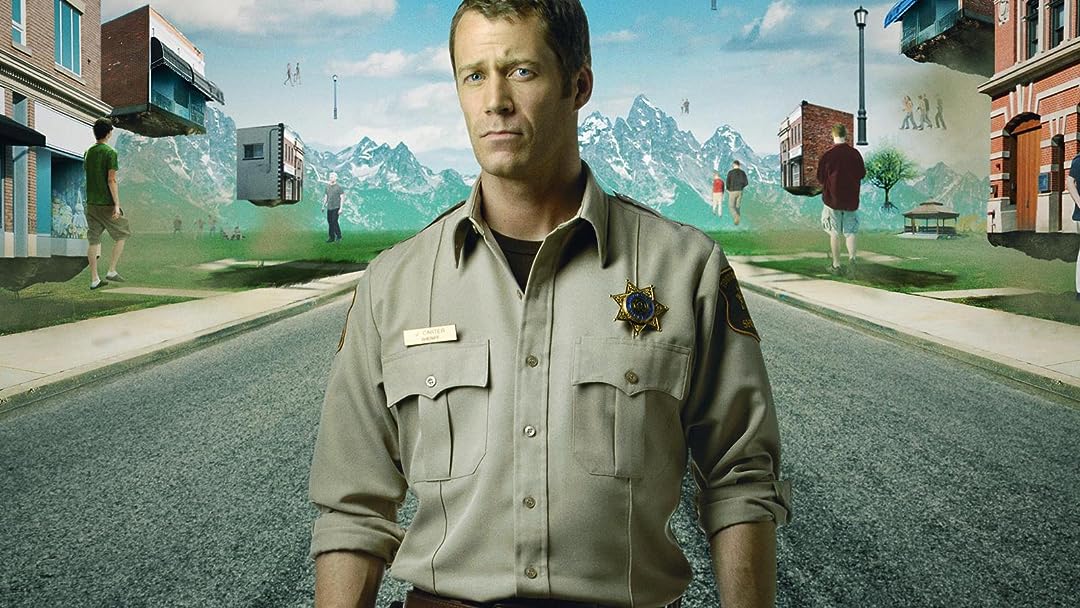 (1,492)
7.92007X-RayTV-14
Eureka is a small town with a big secret: Under the radar, and off the map, it is a government-sponsored haven for the world's smartest people: a place where innovation and breakthrough invention is an everyday occurrence and anything is possible.

JohnAroundTheCornerReviewsReviewed in the United States on August 10, 2014
5.0 out of 5 stars
Eureka: A science town full of genius scientists and one average sheriff
Verified purchase
Can you imagine a community where everyone is a genius? Eureka is a scientific town full of smart people. They don't need a Mensa club in their community because everytime two or more people see each other, the conversation is Mensa quality. Even the sheriff's daughter turns out to be a genius. Only the sheriff, hand-picked to go there, is average. The show is both mysterious and etherial. I'm sure I can come up with a few long words to describe it. Please give this show a chance, after a few episodes, you'll hook yourself.

The second season is just as good as the first, and all the characters have had their chances to grow. The sheriff is constantly trying to solve problems that seem to seek him out every day, while some of the scientists prove how little they sometimes know about interpersonal friendships, but we see them grow.

Time travel was a very interesting way to start Season Two. We jumped from the sheriff's daughter just starting high school in Season One to graduating from high school at the beginning of season two, quite a jump, but then things got out of control, and eventually, we find ourselves truly back where we should have been in time all along.

The directors are doing a wonderful job of letting us feel for the characters. They are fleshed out and are more than just cardboard cutouts.

What else can I say? I love this series, and highly recommend it to you, all five seasons.

Robert S. WrightReviewed in the United States on May 8, 2015
5.0 out of 5 stars
Round two of a Classic
Verified purchase
I honestly think that if this show had been on the WB, we would still be watching it. Syfy may have a great name but they suck when it comes to supporting their hit shows. For whatever reason they get "alligator arms" when a show hits the fourth season and can't seem to reach deep enough into their pockets to find the necessary money to keep the show going. This show actually got a fifth season with 13 episodes, a testament to how good it really was. What makes this show so great is the unique concept of mixing high drama with science in a way that is both entertaining and funny. It has characters that you love and ones that you love to hate. Season 2 was definitely one of my favorites showcasing the rivalry between Jack and Stark. It was also the season they introduced Zane, one of their most iconic characters.
9 people found this helpful

KthrynReneeReviewed in the United States on February 18, 2014
5.0 out of 5 stars
Comedy & Science Fiction together - IT WORKS
Verified purchase
I already own all of the seasons on DVD, but I recently aquired a media player, so it's really convenient to watch the free episodes with my Amazon Prime membership.

I absolutely love this show. Most people don't think that science fiction can work together with comedy, but this show pulls it off seamlessly and wonderfully. Although this is a 'government' owned and ran town, it really focuses on the scientists, inventions, that usually have bugs to work out and affects the town in small and big ways. There is also scientific rilvaries between scientists which add to the reality of the show. Sheriff Jack Carter may not have a genius IQ, but he is usually the one who finds the clues using his investigative experience and expertise and works with the people at Global Dynamics to solve the mysteries more than intentional crimes. It's refreshing to watch a show with so much 'tech' and not much in the way of intentional violence with a lot of clever wit that gives way to a laughter during every episode.
6 people found this helpful

Just my opinionReviewed in the United States on August 3, 2016
5.0 out of 5 stars
Such a fun and unique show. Worth buying if it's not free on prime. I'm on my 3rd round.
Verified purchase
Extremely witty and fascinating. It's sad that it was cancelled due to lack of funds and not cost worthy according to their backers. If it had been on a major player, like HBO, Showtime or Cinemax, it could have gone on for years. Nobody wanted it cancelled, but it was too expensive to make. It shows.
12 people found this helpful

M. J. RothReviewed in the United States on April 27, 2008
5.0 out of 5 stars
A Great Sci-Fi Dramedy
Verified purchase
Many Sci-fi series have had a tradition of high action levels and/or intense moralizing. EUReKA softens the genre a bit without going wacky. Jack Carter, played by Colin Ferguson, is a normal, pizza-eating, baseball loving US Marshal who ends up becoming the sheriff of a present-day town of scientific geniuses hidden in the Pacific northwest. Jack learns to cope with a town full of Segways, Smart cars, and people who alter the space-time continuum, change the weather and return from cryostasis on a regular basis. He does this with a sense of humor and a big dose of scientifically unsophisticated common sense. The best humor - on a par with shows like Frasier - comes from Jack's efforts to fit in and the zingers and one-ups he constantly exchanges with MIT PhD and Nobel Laureate Nathan Stark, played by Ed Quinn. There are more serious elements in the ongoing story line - Jack's search for romance, an autistic savant child who becomes the subject of sinister scientific and military investigation, the challenge of raising Jack's teenage daughter as a single parent - but each episode plot is driven by a well-intentioned experiment-gone-wrong that threatens the town or the universe, and which requires not only a team of scientific geniuses but Jack to resolve. Colin Ferguson leads a great ensemble cast who generate this product so effortlessly that they seem to have been born for their roles.
8 people found this helpful

CharleneReviewed in the United States on August 15, 2012
5.0 out of 5 stars
Eureka Surprises
Verified purchase
This series has been most enjoyable. The only true fault lies not in the actors or writers but in the network executives who obviously choose to start changing directions and purposes after seasons two and three. Inteference from the network has made the series less than it could have been. Additionally, that interference has produced faulty charaterization within some of the many characters, especially Allison Blake; her emotionalism and changeable nature does not make her believeable as head of Global Dynamics. She is willing to sacrifice everything and everyone for the sake of keeping her son, Kevin, from returning to an autistic state. Would a man do that. Even Henry shows characteristics that are not compatible with a scientist.

Nonetheless, the actors have done a fine job, and the characters present interesting reactionsl. It is a funny series that presents enjoyment, except one thing. The children are rude to adults. Now, does this serve as a good example in today's society.

Amazon CustomerReviewed in the United States on August 18, 2017
5.0 out of 5 stars
Absolutely lovely family movie!
Verified purchase
Truly a spectacular family show. A great, goofy introduction to STEM curiosity for kids, and an entertaining storyline for adults. I couldn't possibly love this show any more than I already do.
3 people found this helpful
See all reviews
Back to top
Get to Know Us
Make Money with Us
Amazon Payment Products
Let Us Help You
EnglishChoose a language for shopping. United StatesChoose a country/region for shopping.
© 1996-2021, Amazon.com, Inc. or its affiliates