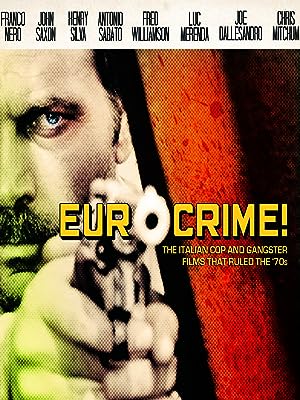 Eurocrime! The Italian Cop and Gangster Films That Ruled the 70s

(57)
7.72 h 7 min201216+
Eurocrime! is a documentary concerning the violent Italian poliziotteschi cinematic movement of the 70s which, at first glance, seems like just a bunch of cheap rip offs of American crime films like Dirty Harry or The Godfather. But on closer inspection, these films were really addressing distinctly Italian issues like the Sicilian Mafia and red terrorism.

Brian P. NestorReviewed in the United States on November 17, 2014
4.0 out of 5 stars
Labor of Love
Verified purchase
"Eurocrime!" is an excellent if low budget documentary about a film genre that is begging to be rediscovered. This has all the hallmarks of a labor of love. The information in the documentary is five star; the production value is between two and three stars. However, the film makers do interview many of the key players (my favorite is Franco Nero, a work horse of the Italian film industry during this period and a fine actor). But the cost of getting the rights to excerpt so many films means that film clips themselves are infrequent and often low quality or straight from trailers.

But this documentary is more than just a review of a genre; it branches into social and economic factors that served as inspiration and backdrop. The Mafia (many different varieties) and the Red Brigade are discussed as much as any individual actor or director. And all the important moments are covered, although many are just touched upon because of the vastness of the overall subject. In fact, the entire movie viewing habits of Italy becomes one of the focuses, along with the impact of television viewing. I commend the authors for their reach.

As far as entertainment, there is plenty of that as well. Sections about insane stunts and dangerous practices are jaw dropping (such as the clip of a rifle blowing out glass in a car perhaps two feet from the main Hollywood actor). And the remembrances of actors such as Henry Silva and John Saxon are priceless and worth the price of admission alone. As I said in the beginning, this documentary does a better than average - excellent, in fact - job of covering the subject in the widest possible sense. It is only inconsistencies of the production - cropped screens, occasional bad audio during an interview - that make me lower this from a five star review. By the way, make sure to watch the Tomas Milan interview in the special features - one of a kind!

I wish someone would do similar documentaries about Giallo films and Italian horror...

Great ScottReviewed in the United States on December 9, 2019
5.0 out of 5 stars
FANTASTIC!
Verified purchase
First off—get a bloody editor lol. But I LOVED it. And the documentarian captures so much of what and why these films were great. One MAN against the world. YES. That was it. Individualism that was forbidden in American society, lived again in Italy where it was born (via Greece) and with the flare of Italian culture—love of life, love of women, love of food...and more cars...and more women.

I lived and learned in Italy before making films and other fine things back in the USA, but these movies still inspire me. The best one is of course MILANO CALIBRO N.9 as is the actor in that film (Gastone Moschi). Too bad he didn't make it into this one although pretty sure that he no longer walks the earth.

My sincere thanks to the director here. Great job!
One person found this helpful

RJ StokelyReviewed in the United States on November 8, 2014
5.0 out of 5 stars
An Interesting Look at an Overlooked Genre
Verified purchase
Eurocrime! The Italian Cop and Gangster Films That Ruled the '70s is a great look into the poliziotteschi or police/underworld dramas made in Italy in the late 1960s and early 70s. The film interviews several of the key actors involved in the genre, like Franco Nero, Anthony Sabato, Chris Mitchum, and Henry Silva.
This film goes into depth in every way possible on the genre. It explores why these films are not just cheap knock offs of American films like Dirty Harry or the Godfather, by showing the culture and politics of Italy during the 1970s. The film explains why there are certain archetypes in these films and why there are so many. It is extremely entertaining. The stories from the actors about performing their own stunts are worth the watch.
If you are unfamiliar with Eurocrime or poliziotteschi - bear in mind it is in many cases (but not all) a step bellow a Dirty Harry film. They were part of the exploitation genre, so you will get some good, some bad , and some extremely ugly. To describe the genre in brief it is like film noir and spaghetti westerns were mixed together with loads of violence and shock.
Even if you have not seen any of the films, I would recommend the film simply on how well the low budget documentary is done and for the interesting and bizarre stories. If you enjoy this I would recommend the film Violent City with Charles Bronson, and Street Law with Franco Nero.
3 people found this helpful

UnrepentantReviewed in the United States on July 8, 2019
5.0 out of 5 stars
Top notch Euro Crime documentary
Verified purchase
A must have for Euro crime fans! Incredibly informative and entertaining.
One person found this helpful

wais tarziReviewed in the United States on September 11, 2016
5.0 out of 5 stars
Ciao Roma.
Verified purchase
A lot fun it is to watch this documentary. As a lover of 70's Italian gangster movies, this documentary gives real insight in to what went on behind the scenes during this making of these movies. You a get small taste of the real life politics inside Italy, of the working conditions during production of these movies, the fun stories from some of the stars of these movies. Just listening to the great Franco Nero recall his memories from making these movies was a lot of fun. I highly recommend it. You will not be disappointed.
2 people found this helpful

ChasemouseReviewed in the United States on September 22, 2017
4.0 out of 5 stars
Glad it's on my DVD shelf.
Verified purchase
Simply put, this is a must for any Eurocrime fan or anyone with an interest in action/crime cinema. You don't need to know the players to enjoy it but your appreciation will be enhanced if you do. Lovingly researched and presented.
One person found this helpful
See all reviews
Back to top
Get to Know Us
Make Money with Us
Amazon Payment Products
Let Us Help You
EnglishChoose a language for shopping. United StatesChoose a country/region for shopping.
© 1996-2022, Amazon.com, Inc. or its affiliates