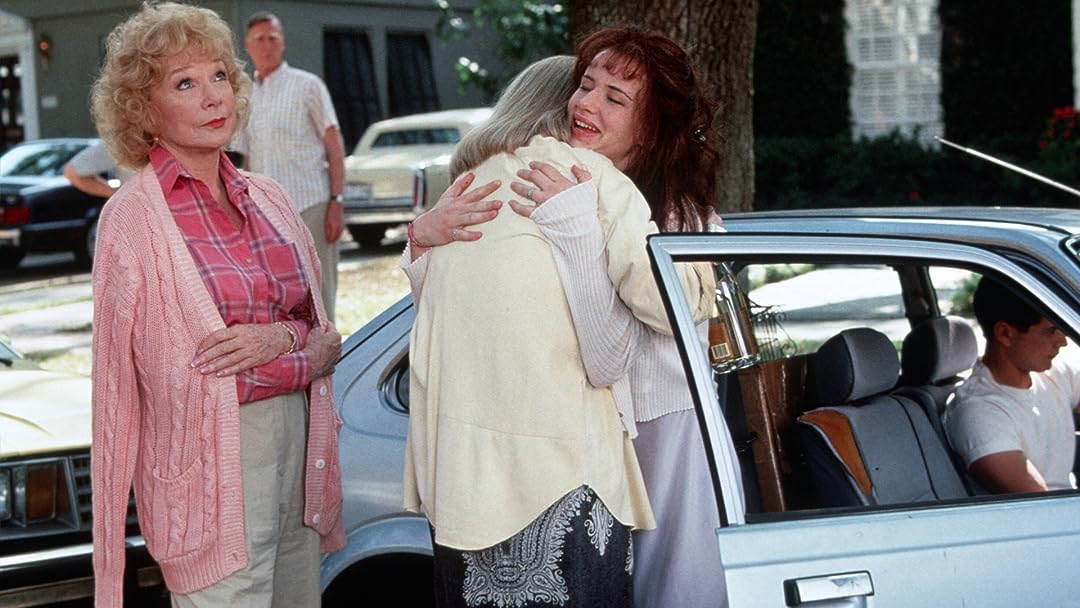 (414)
5.92 h 9 min1996X-RayPG-13
Still missing her daughter 13 years after her death in "Terms of Endearment," Aurora Greenway (Shirley MacLaine) struggles to keep her family together. She has one grandson in jail, a rebellious granddaughter, and another grandson living just above the poverty line.

anReviewed in the United States on October 3, 2019
5.0 out of 5 stars
Finally watched it all the way through
Verified purchase
I grew up on Terms of Endearment, Beaches, Steel Magnolias, Fried Green Tomatos ......these movies will always have my heart..... I can't find the words to describe this genre, but they definitely belong to a genre of their own. I'm sure there is a name for them and if there isn't one, there should be, and will be. This genre lasted from 1983-1991 ish. It didn't matter if I was a kid, I watched these movies hundreds of times, especailly wtih my grandmother. At a young age, I really understood and took in these movies as they were intended to. I think it's even better to watch them at first at a younger age because you aren't jagged by the world just yet. These movies really shaped my generation of females my age.

Now as for this movie, I was 16 years old when this movie came out (1996) and I remember it being a flop and it really was painful to watch it be ignored by almost everybody, but ........I could kind of understand why. In those times, the early 90's and the mid 90's, while only seperated by 5 years, there was just such a cultural change that was huge and fast. I have yet to experience that kind of a strong and fast change in such a short amount of time. From the fashion, to the music, to the types of movies, to I can't even listen them all, but you get my point. So, in 1996, this film was completely foreign to the 1996 times. We looked at The Evening Star as, as hard as it is to call it that, we looked at it as corney and so cringe worthy, trying to desperately capture that genre from the 80's but failing so miserably. We just thought that genre was over. Not that we wanted it to be, but we thought enough of those types of movies have been done and they were wonderful and it was best to leave it in the past so it didn't become ruined by doing it too long and it getting old and stale. They left on a good note at the right time and will forever be a cherrished part of movie history, just life history in general to be honest. The evenin

Covered in ClayReviewed in the United States on April 30, 2018
1.0 out of 5 stars
It would never have turned out this way
Verified purchase
What a let down after Terms of Endearment. The acting was teriible, even Shirley was disappointing. All the characters were parodies of those from ToE. This was total Hollywood fantasy. The reality of kids being raised by a nacissistic grandmother would almost certainly not have had so many happy outcomes. The only accurate thing was that abused children will almost always love and defend their abuser. And then there is the therapist subplot! Geesh! If you are 12 years old or younger and need to have a happy ending then you will like this movie. For the adults, I would not recommend this movie.
5 people found this helpful

john francis leonardReviewed in the United States on January 19, 2015
4.0 out of 5 stars
Great film!
Verified purchase
I grew up on Terms of Endearment! My mom took me to see it when I was a boy, and it has always remained one of my favorite films. When I got a little older, I read the excellent book by Larry McMurtry and it's even better sequel The Evening Star. The film version doesn't quite top the original, but it's still excellent with an incredible cast! Larry McMurtry pens the screenplay adapting his novel, and Shirley MacLaine returns as the formidable Aurora Greenway. Also doing an incredible turn as brash Texas socialite Patsy is Mirada Richardson, one of my favorite British actresses. The whole cast is phenomenal! It's fascinating for a fan of the original to see how all of the characters cope and change after the death of Emma. I think the main thing that holds this film back from the brilliance of the original is the writing. This sounds crazy because the author of the novel adapted his own book, but I can only imagine that writing a great novel and writing a great screenplay are two very different animals and the original novel is nothing if not brilliant!
9 people found this helpful

BRscriberReviewed in the United States on September 1, 2019
4.0 out of 5 stars
NOT "TERMS", but on its own, without the comparison, an excellent film.
Verified purchase
Although the editing and direction are a little disjointed, messing up the pace; this is a very good movie. Robert Harling ("Steel Magnolias" is an excellent writer of dialogue, being a playwright, and being a writer for the theatre, his ear is geared for character and the the fact that actors are breathing life into the lines. So, it's not supposed to be THAT REAL. Frankly, I'm a little exhausted by the extremes in movies and TV today. Either they're too "real" or women are having sex with fish. Shirley MacLaine owns this movie, and probably had more power on the set than she did with Brooks. But nothing wrong with a good cry over characters you're invested in, false or true.
3 people found this helpful

Addicted2AmazonReviewed in the United States on January 25, 2019
4.0 out of 5 stars
Terms of Endearment Part 2
Verified purchase
Shirley MacLaine is one of my favorites. It was satisfying being able to see the kids grow up. The romantic relationship was somewhat trite, but added a bit of humor. The reality of the various ways the kids turned out was understandable, though the miraculous recovery of the oldest boy wasn't well developed. Overall, worth seeing. The movie could have been shorter and kept its essence.
2 people found this helpful

believeinthestarsReviewed in the United States on August 30, 2014
4.0 out of 5 stars
Rich Characters, a Message for the Ages
Verified purchase
This is a great movie for those of us who've grown up and accepted the fact that there's no Santa Claus, but we still celebrate the joy of living the lie anyway. Shirley MacLaine is at her cantankerous yet warmhearted best as the perfectionist, Aurora Greenway, plowing her way through the lives of all those who love her in ways she seems completely unaware of. We've all had someone like Aurora in our lives and we all know that we have no choice but to just shut up and love them. This movie reminds us why. Marion Ross is brilliant as Rosie Dunlop, Aurora's lifelong companion and maid. Miranda Richardson nearly steals the show as Patsy, the rich bitch trouble-making best friend of Aurora's deceased daughter (Terms of Endearment). Jack Nicholson is, as always, the perfectly imperfect hero that the audience secretly hopes will be the answer to what's missing in Aurora's life.... this treat is one to buy and watch over and over again when you just want to feel good about being human...
6 people found this helpful

OligonicellaReviewed in the United States on July 1, 2020
3.0 out of 5 stars
She plays control freak so well.
Verified purchase
Don't get me wrong, it's an excellently acted movie. Every participant scored a direct hit.

That said, it's the script I had a problem with. Granny was by far the most toxic and dysfunctional character in this film and yet towards the end it attempted to portray her as beloved and caring. She wasn't.

"Physician, heal thyself." Uttered by the older woman who sneaked into his house through a window at 2AM with the explicit purpose of screwing him.

Grace NotesReviewed in the United States on August 29, 2019
1.0 out of 5 stars
Unwatchable
Verified purchase
Pure drivel. Just a couple of people storming around, generally being obnoxious and trying to pass it off as a plot. What a wasted cast.
5 people found this helpful
See all reviews
Back to top
Get to Know Us
Make Money with Us
Amazon Payment Products
Let Us Help You
EnglishChoose a language for shopping. United StatesChoose a country/region for shopping.
© 1996-2022, Amazon.com, Inc. or its affiliates