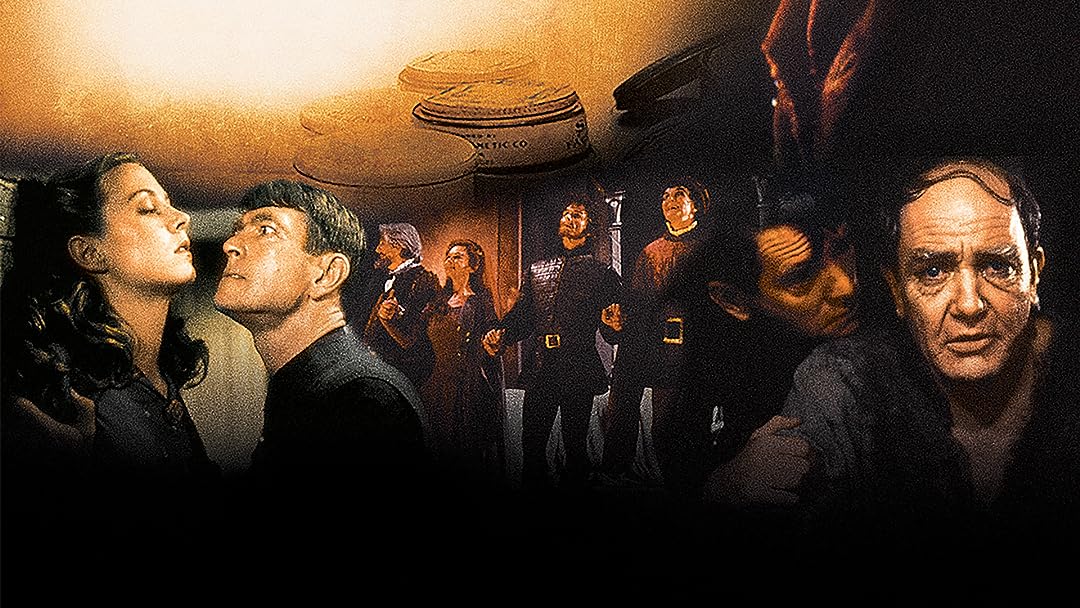 (352)
7.61 h 33 min2009PG-13
Follows the plight of real-life dancers as they struggle through auditions for the Broadway revival of "A Chorus Line". Also investigates the history of the show and the creative minds behind the original and current incarnations.

KeepitrealReviewed in the United States on February 13, 2019
5.0 out of 5 stars
Five, Six, Seven, Eight . . .
Verified purchase
I think I bought tickets to A Chorus Line before I food shopped. I took everyone I knew to see it. I didn't like the movie as much as I did the stage production, but when I stumbled upon this documentary of the revival of A Chorus Line, I was hooked again. The tension, physical demands, emotional ups and downs of auditioning for the only job you want is so clear and intense, this is unmatched! So glad I found it. Awesome!
22 people found this helpful

VWReviewed in the United States on June 28, 2020
5.0 out of 5 stars
A Wonderful Echo Of The Show
Verified purchase
I, too, saw the original B'Way production and was totally wowed by the finale - the gold, the mirrors, the lights... I loved it. This documentary is actually in layers - you listen to the tapes that Michael Bennett made with a group of actors, dancers talking about their various lives. These intensely emotional recordings led to the creation of A Chorus Line. Then you see footage, in black and white, of the original characters doing their parts, interspersed with the present-day auditioners, singing and dancing those same moments from the show. Very fascinating and also painful to watch, because nearly all of them are rejected and you listen in while the director, choreographer, etc. discuss strengths and weaknesses. Must have been excruciating for rejected ones to see this movie. But, you'll love it.
9 people found this helpful

K. (a guy)Reviewed in the United States on June 4, 2020
5.0 out of 5 stars
Delivers.
Verified purchase
I watched this as a fan of documentaries; not the musical itself, or the art form. So, I've never seen "A Chorus Line" in its entirety. As a viewer I was at a loss and struggled to keep the character parts sorted with the actors who are auditioning for specific roles. The film considers you may be such a viewer and fleshes out the roles of the musical with backstories from those who inspired them. But you will struggle if you come at this film with no history with the musical. The film fleshes out some roles for the viewer notably "Connie and Cassie". Additionally, you'll hear the backstory about the creation of the musical and its creator Michael Bennett. The film does a fantastic job of weaving him in throughout the production but doesn't allow him to cast too big of a shadow. The real the lynch pin of the film is the production itself and it stays on target.

I was totally enthralled by the overwhelming talent so many of these performers have, some of them are top tier and it shows. Because of the flood of performers you really start to see what the production team sees. They perform the herculean task of whittling down 3,000 plus performers to just the performing cast. Auditions jump right out at you and you're amazed. One actor is even more phenomenal than the source material he eventually portrays bringing the production staff to tears. And then there's something I'm totally a sucker for which is showcased in the film, and that is the concept of, "hard work trumps talent; when talent stops working hard". Two performers; one who even performed her part previously, the other who allows his arrogance to trip him up, miss the mark and are cut from the production. You'll see a difficult performance described as being, "the Four Minute Mile" live up to it's difficult reputation as performers crash and one nails it.

One fair critique is the absence of the many male roles in "Every Little Step". But as I'm not familiar with the musical it's based on, it really didn't stand out to me as it did other reviewers. Maybe because this film stays tight. It covers months of production, past histories, human interest stories, and the effects of ruthless competition in just 96 minutes. It has a great story to tell and it neither meanders of sprawls off into needless homages into the difficulty of making it big. It delivers for me and it's worth anyone's time if they have even just a passing interest in the performing arts.

LegoGirlReviewed in the United States on October 5, 2015
4.0 out of 5 stars
What They Did For Love
Verified purchase
If you are a fan of musical theatre in general or even just A Chorus Line in particular, this documentary is a must-see. It flips back and forth between looking at the original creation and staging of the show, and the audition process for the 2006 Broadway revival. Lots of wonderful interviews from old and new cast members, and of course great clips from different stage productions. The movie adaption of this groundbreaking show was simply awful---this documentary will erase all that from memory and bring the magnificent original stage show front and center.

I was already pretty familiar with the backstory of the show's beginnings with choreographer Michael Bennett, so I most enjoyed the in-depth look at the revival audition part of this film. Dancers lined up in the rain for hours, waiting to see if they can survive the first cut (after performing just one double-pirouette!). Pass the dance cuts, then you have to prove you've got the singing voice for the part. Dance yes, voice yes---now you need to act. "100 nos to 1 yes," as one person says of the life of a Broadway dancer. When the final callbacks are finished, you'll despair or celebrate along with them.

One star off for some minor reasons: The filmmakers chose to focus on just a couple of roles in the revival audition process, and I would have loved to get even a small glimpse of the finalists for some other critical parts. The archival footage from the original Broadway production could have been expanded, with perhaps some comparison between those dancers and the revival wannabes. I definitely would have loved to see an extended "director's cut" with as much dancing, singing, and discussion as they had on hand!
16 people found this helpful

nolpatrickReviewed in the United States on September 22, 2020
5.0 out of 5 stars
Beautiful in every way
Verified purchase
What a beautiful testimony to the most quintessential Broadway show that's ALL about the struggles of the stage performer trying to "make it". This documentary not only gives up the "behind-the-scenes" of the audition process for this revival of the show, but it also gives a lot of background about the origins of the original. And the "stars" of this documentary are both those who "make it" and those who did their damnedest...but didn't. Amazing and moving.
**One important note-- I wish someone at Amazon would fix the description on their site -- in no way, shape or form does Sarah Jessica Parker or Liza Minelli "star" in this film!!! Their faces appear towards the very end among many celebrities who ATTENDED the opening of this revival of "A Chorus Line". **
5 people found this helpful

Steve CramerReviewed in the United States on September 5, 2020
5.0 out of 5 stars
Captured much of the essence of behind the scenes making of a Broadway show
Verified purchase
Too many years ago, I used to stand in line at TKTS, hoping to get half-priced tickets, especially for my favorite show, A Chorus Line. I've seen it quite a few times, even a couple times from the lighting booth. So yes, I know the original show quite well.

I wasn't sure what to expect, or how any revival cast could possibly compare with the original that was so absolutely set in my mind, but the moment this film began with that cattle call, seeing the lines down the block of all those dancers hoping for some chance, and knowing the real number that would be cast, I found the thrill once again, reliving all those times, all those faces filled with hope, all those tears I so often saw from backstage.

Of course, I had my favorites in this new cast, and quickly felt I knew the final cast. Sometimes I was right. Surprisingly, I was often wrong in unexpected ways, just as those sitting at that table were surprised by the changes over those many months, for the better, for the worst.

And that is why this film was so good. I was there again, just like you will be there if you've ever been part of a theatrical production.

Bravo for such a wonderful documentary that shared such a personal inside view to the triumphs, devastation, and resolve to try again, because, 'maybe next time I'll get it'.
One person found this helpful

ChrisSherrillReviewed in the United States on June 21, 2020
4.0 out of 5 stars
Fascinating
Verified purchase
I always loved the old movie musicals like Showboat, Carousel, The Sound of Music, but I didn’t have much interest in the process of making them. I saw this and thought I would give it five or ten minutes. Ninety minutes later and I’m sitting here and all I can think is, Damn. It totally arrested me and held me a willing captive for the entire time, including the full “What I Did for Love” at the end. Incredible demonstration of what dancers do for the love of their art. They put it all on the line, all on the line, every time. I have so much more respect and admiration for them now. Wow!
2 people found this helpful

HortensiaReviewed in the United States on May 22, 2020
4.0 out of 5 stars
Enjoyable
Verified purchase
I enjoyed the film for the most part. I liked seeing some of the auditions and the background of how the show was created. I wish I could have seen a little more of each one who got a part in the revival. I didn't recognize anyone, so I wonder how many went on from this revival to greater things. But I'm not much of a theater person, so perhaps they all have done well and I just don't know about it.

Very puzzled as to why Liza Minelli and Sarah Jessica Parker are listed as part of the cast. Each one had a 2-second appearance at the opening night as part of the audience.
See all reviews
Back to top
Get to Know Us
Make Money with Us
Amazon Payment Products
Let Us Help You
EnglishChoose a language for shopping. United StatesChoose a country/region for shopping.
© 1996-2022, Amazon.com, Inc. or its affiliates