And Every Morning the Way Home Gets Longer and Longer and millions of other books are available for Amazon Kindle. Learn more 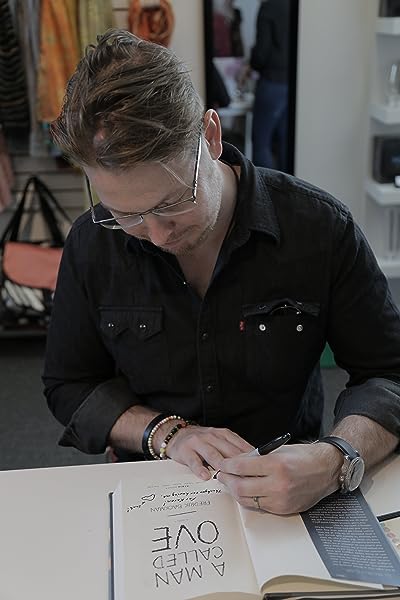 Start reading And Every Morning the Way Home Gets Longer and Longer on your Kindle in under a minute.

4.5 out of 5 stars
4.5 out of 5
1,607 global ratings
How are ratings calculated?
To calculate the overall star rating and percentage breakdown by star, we don’t use a simple average. Instead, our system considers things like how recent a review is and if the reviewer bought the item on Amazon. It also analyzes reviews to verify trustworthiness.

sb-lynn
TOP 500 REVIEWER
5.0 out of 5 stars This sweet, profound little book packs a powerful punch.
Reviewed in the United States on September 16, 2017
Verified Purchase
Normally I start all my Amazon book reviews saying "brief summary and review, no spoilers." But in this case, that's not really necessary.

This spare, powerful little story is about a grandfather who is "disappearing" from his having dementia and we learn about the bond between him and his young grandson, Noah. He calls the young boy NoahNoah in the book.

Because the story is often told from the point of view of the grandfather as he sees his world reduced and as he "talks" to his deceased beloved wife, the reader is left feeling what it must be like to have this horrible condition. It's really quite brilliant as is disconcerting for the reader. As the author himself says in the beginning introduction:

"One of my idols once said, 'The worst part about growing old is that I don't get any ideas anymore.' Those words have never quite left me since I first heard them, because this would be my greatest fear: imagination giving up before the body does. I guess I'm not alone in this. Humans are a strange breed in the way our fear of getting old seems to be even greater than our fear of dying."

This is such a little gem of a book. At times dreamlike, at times more straightforward, the story so beautifully shows us the bonding between Noah and his grandfather and the kindness and love between them; the shared wisdom that carries Noah forward in time.

As to anyone who has had a relative or loved one with dementia or Alzheimer's- for me it was my father - this book so eloquently describes that long goodbye and how poignant and perfect the title.

It will make you cry. However, what insight into the world of the elderly with dementia or Alzheimer's.... This is beautifully done.
Read more
85 people found this helpful
Helpful
Report abuse

Karen@thebookreturnblog
4.0 out of 5 stars Great story about memory loss and love.
Reviewed in the United States on December 2, 2016
Verified Purchase
And Everyday the Way Home Gets Longer and Longer’ is a novella about the love one man has for his son, grandson, and wife. The man is slowly slipping into a state of memory loss. His greatest fear is that he will soon not remember any of his most beloved memories.

In a letter to the reader at the beginning of the story, Backman states,’This is a story about memories and letting go. It’s a love letter and a slow farewell between a man and his grandson, and between a dad and his boy.’ He also explains that writing this story was a type of therapy for him as he too has experience with a loved one with memory loss.

As I began to read this story, I soon realized that this is both a similar and different type of story to Backman’s other works. It is similar in that it portrays an older person and their relationships. It is different in that the story line is not as straight forward as other Backman’s works.

The story is told through the perspective of the grandfather who is sinking deeper into dementia. It switches between the grandfather speaking with his grandson, Noah, his son,Ted, and his wife who had previously passed away. His thought process is scattered but at the same time deeply symbolic. He likens his brain to a park square that gets smaller and smaller each day and the ‘way home’ is his process to remember details of his life each morning. He then explains that the objects in the park symbolize different memories.

Although this was less of an easy read then I found Backman’s other books, to be, this book is just as amazing. It gives an honest look at how hard and complicated it must be to lose someone you love before they actually die. Backman does a wonderful job of panting a picture of someones mind as they are mentally slipping away.

Another amazing read from Backman and a quick read as it’s only ninety-six pages. Backman has an amazing gift for writing characters that I makes me feel that I know them personally. This is one of those books that is a must read for all.
Read more
60 people found this helpful
Helpful
Report abuse

Mr. Joe
VINE VOICE
4.0 out of 5 stars Short and bittersweet
Reviewed in the United States on July 1, 2018
Verified Purchase
“Those who hasten to live are in a hurry to miss.” ‒ from AND EVERY MORNING THE WAY HOME GETS LONGER AND LONGER

AND EVERY MORNING THE WAY HOME GETS LONGER AND LONGER is a very short work by Frederik Backman and of the appropriate length to make its point. The protagonist, if he can be called such, is Grandpa, who’s enduring advancing dementia – perhaps Alzheimer’s ‒ as he approaches death. Most of the story is from the perspective of his deteriorating mental state as he grapples with losing his most precious memories as well as continuing his relationship with his beloved grandson Noah and his son Ted, both of whom must learn how to support him in his final decline and eventually say good-bye.

The saddest and most bittersweet aspect of the story is Grandpa’s memories of the love of his life, Grandma, who has predeceased her husband but still speaks with him in his mind’s eye.

I read it in 40 minutes. (I know the duration exactly because I was timing myself on an elliptical while reading.) Is AND EVERY MORNING THE WAY HOME GETS LONGER AND LONGER a masterpiece of writing? Well, no. But it is a perceptive, sensitive, and empathetic treatment of the condition many will ultimately arrive at if long-lived enough. And for the older reader approaching the event horizon, the more intimately relevant it may be.
Read more
6 people found this helpful
Helpful
Report abuse
See all reviews

Esty Edwards
5.0 out of 5 stars Nigh on perfect.
Reviewed in the United Kingdom on January 26, 2017
Verified Purchase
I am in awe of the way Backman writes - his perspective is so unusual and yet so universally understood. Like other reviewers, I read this novella in one go, having bought it after reading what is now one of my favourite books, A Man Called Ove.You would think that everything on the subject of aging had already been written by now, but I was sobbing through this at 1am despite being the least outwardly emotional person you will meet. The conversations between Grandpa and Noahnoah make you smile and leave a lump in your throat. Ultimately. it is an uplifting book despite the emotional punches. It's rare that I will give a book five stars but to me this little book is nigh on perfect and I've been recommending it to friends ever since I finished it.
Read more
8 people found this helpful
Report abuse

BTPBookClub
5.0 out of 5 stars Beautiful. Emotional. Tear jerker for me.
Reviewed in the United Kingdom on November 14, 2020
Verified Purchase
WOW! This has gone straight into my top 20 of the year and I am amazed because it's only 75 pages long, but it is a hard-hitting, emotional and for me a tear jerker of a read. Such beautifully written. Eye opening and a story that many readers themselves may have experienced or will do in the future.

Perfection. I did tear up. A short read which won't take long to get through so perfect for those readers with busy lives or in a book slump. Has some beautiful illustrations throughout to accompany the story. Its a must read from me. Highly recommend. A well deserved five stars. Pop it onto your pile you won't regret it.
Read more
One person found this helpful
Report abuse

Stuart McLoughlin
5.0 out of 5 stars A book to open your mind.
Reviewed in the United Kingdom on January 1, 2017
Verified Purchase
I am a fan of this author so may be a little biased, but I read this book in one sitting. I'm glad I did as the emotional punches are stronger like that. I wont give any spoilers just to say it makes you think, whilst being very entertaining.
Read more
9 people found this helpful
Report abuse

Marion Lambert
1.0 out of 5 stars Inaccessible
Reviewed in the United Kingdom on November 13, 2020
Verified Purchase
When i came yo read the book i found that it had been put together incorrectly. You have to turn the book upside down to find page 1 halfway through, this goes to page 21. To find page 23 the book has to be reversed again . Page 23 is after sveral beginning pages ! I hope i shall be able to make sense of it.
Read more
One person found this helpful
Report abuse

M. I. Shepherd
5.0 out of 5 stars Deep and very enjoyable
Reviewed in the United Kingdom on August 15, 2018
Verified Purchase
I've nearly read all of Fredrik Backman's books and this Novella, although short, was a joy and a deep insight into the relationship between Grandfather and Grandson. Would highly recommend.
Read more
2 people found this helpful
Report abuse
See all reviews