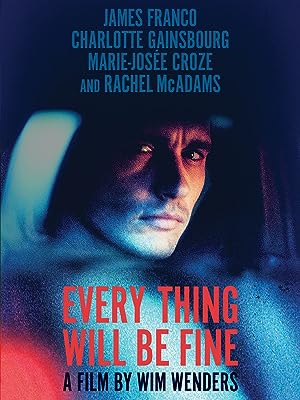 Every Thing Will Be Fine

neaReviewed in the United States on July 6, 2021
1.0 out of 5 stars
Slow AND weird
Verified purchase
Well I just wasted an hour and a half of my life I can"t get back. To quote my son who watched this tome with me, "well that has to be the the dumbest, weirdest, dullest ending I have ever seen." And I concur. When I think this was supposed to have been directed by a "legendary" director I think it was pretty darn dull. And the ending was sure NOT what I expected, wanted. Not so sure where the Love was supposed to come into this movie, can't see that there was any love or chemistry in this movie AT ALL.
One person found this helpful

Mary ZReviewed in the United States on December 31, 2015
5.0 out of 5 stars
Don't Miss This One — Losing My Faith in the Post-Ebert World of Bad Film Critics
Verified purchase
I was almost kept away from watching this because it's received such harsh reviews. I am glad I ignored them. So, yes, this is visually stunning, but what critics seem to be saying is that's where it ends — the rest does not hold together. I disagree. I think this is just immensely subtle. It's a rare film where it requires of its viewers they be still and quiet, open and receptive, even contemplative. I found myself very drawn in, and I also felt myself very much identifying with Franco's character, Tomas. And I cared very much about him and about Kate and Christopher, especially. And I believe Roger Ebert always said that if you can see yourself in the characters, if you find yourself caring about them, if you are engaged and swept up by this film as Wenders intended with its gloomy, sad, deep visual texture, then it does have something important to say. In many ways it could be characterized as having symbolic moments, and that's fine. And Wenders' use of 3D is very different from, say, a Michael Bay movie, and that's not bad at all! I would recommend this to anyone who needs a quiet respite and will give the film such attention. It might even ask something of yourself you need to address.
21 people found this helpful

SteveReviewed in the United States on December 21, 2015
5.0 out of 5 stars
LIFE FROM A DIFFERENT PERSPECTIVE
Verified purchase
Many call this film dark and the main character Tomas, self absorbed. The reality here is that everyone handles catastrophic events differently and this film shows it from this character's perspective. He is a regular guy with his own foibles, which you may or may not agree with. Mr Franco handles it perfectly as a man who lets his instincts guide him.

The main characters are Tomas (played by Franco) along with a boy and his mother who live with their dog in a remote location. A tragic accident occurs on a snowy road. Piles of snow block full view of the surroundings (sometimes the deck is stacked against you). The brother's reaction is curious. Tomas is a writer who's skill and success improve after the accident. There are various love interests who get caught up in the story, and bitterness ensues about the life choices Tomas's makes. A carnival scene gave me a sense of dread (rightfully so). The ending is a redeeming factor.

The soundtrack is reminiscent of Bernard Hermann's score for 'Psycho' during most of the film.

Mr Franco's presence often has you watching just for the sake of watching him! Like Brando, Clift et al before him, his presence hovers large over the film (which was a bit of fun in a very serious film.)

This film was shot in 3-D and I was hoping my first viewing would be in that format. Since Amazon had it as 'rental only' in regular ol' HD, well I took what I could get. As a 3-D TV owner I hope this film is eventually released as a 3-D Blu-ray Disc. I bet that a lot more of Director Wim Wenders true intentions will come to light with the expanded visuals that we are missing.

Micah, the movie loverReviewed in the United States on December 17, 2015
5.0 out of 5 stars
EVERY THING WILL BE FINE is not for everyone. It is very dark and depressing mostly, but there are real moments of true depth.
Verified purchase
I thought that although this is a dark and sometimes very depressing film, that it still had moments of depth, sensitivity and beauty. I disagree with the other reviewer who thought that the main character, Tomas (played superbly by James Franco) was just ruthless and narcissistic. I just felt like he was a person who didn't show his emotions, easily, especially after the accident. If he had been so ruthless, the scene with the mother of the boy never would've occurred nor the ending, which i thought was just what Christopher had been needing from Tomas's character.
This is a dark film, no doubt about that, but I thought it was well worth watching.
18 people found this helpful

AatiiReviewed in the United States on May 5, 2021
1.0 out of 5 stars
Just sad
Verified purchase
Not worth sitting to watch this..
One person found this helpful

Amazon CustomerReviewed in the United States on August 23, 2020
5.0 out of 5 stars
Like a poem...
Verified purchase
Like a poem found while browsing in an old bookstore on a raining afternoon.
One person found this helpful

Kendra BReviewed in the United States on June 15, 2016
4.0 out of 5 stars
Side stepping the shadows of regret
Verified purchase
Stirring. I found myself more moved by what wasn't said in the film. Shadowy territory, a place we hope we never have to dwell. Regret is worthless, it's redemption that makes us whole again.
3 people found this helpful
See all reviews
Back to top
Get to Know Us
Make Money with Us
Amazon Payment Products
Let Us Help You
EnglishChoose a language for shopping. United StatesChoose a country/region for shopping.
© 1996-2021, Amazon.com, Inc. or its affiliates