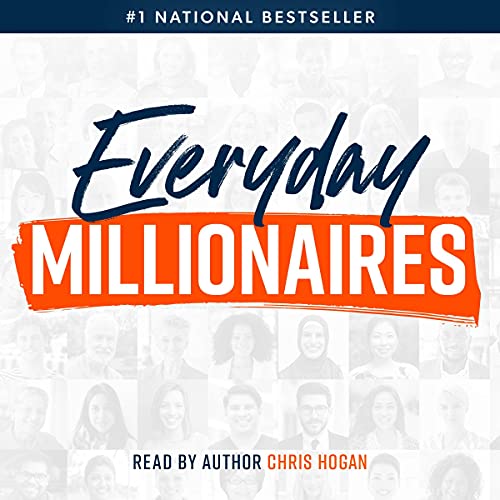 List Price: $19.95
You Save: $6.96 (35%)
By completing your purchase, you agree to Audible’s Conditions Of Use
Sold and delivered by Audible, an Amazon company
Share

4.6 out of 5 stars
4.6 out of 5
3,007 global ratings
How are ratings calculated?
To calculate the overall star rating and percentage breakdown by star, we don’t use a simple average. Instead, our system considers things like how recent a review is and if the reviewer bought the item on Amazon. It also analyzes reviews to verify trustworthiness.

John
1.0 out of 5 stars Not Worth The Money...Full of Fluff!
Reviewed in the United States on January 7, 2019
Okay, so I can't do this Dave Ramsey stuff anymore. I had been on the edge but this book made me see the light. I think the reason why Ramsey Solutions comes out with books is so the Ramsey followers will rush to buy the newest book and create instant sales for Mr. Ramsey's company. It is not an analytical book and is mostly fluff. I had to force myself to read it all. I'm starting to believe that Ramsey creates these "Ramsey Personalities" in order for them to create books and products to sell to his flock of followers. Mr. Hogan is another one of Mr. Ramsey's created personalities. They are all motivational speakers, they are not financial planners, they have no credentials but they do generate a steady stream of books and occasionally give quick advice on the radio as entertainment. The original millionaire next door is like a 10 and this book is like a 1. If you are a beginner and need some motivation knock yourself out.
Read more
564 people found this helpful
Helpful
Report abuse

Josh
2.0 out of 5 stars More of a motivational book. Lacking on metrics.
Reviewed in the United States on January 11, 2019
Verified Purchase
I was very excited when this book was announced as I am a Chris Hogan fan. I was expecting a modern twist of Millionaire Next Door with lots of data and tables to show the preferences and habits among millionaires. This book is basically a pep talk with figures scattered throughout the text with the last two chapters being a brief action plan on how to get started. I did like the busting of millionaire myths and how focus was given on the importance of participating in company sponsored retirement plans.

Overall if you are young and looking for motivation to start building wealth this is a good pep talk but if you are already motivated and want to dig deeper this is not for you.

If metrics are what you are looking for I recommend “Stop Acting Rich and Start Living like a Real Millionaire” by Thomas Stanley. That goes into great detail about millionaire buying habits and preferences. If you want to learn about budgeting and planning for milestone events then I would recommend Dave Ramsey’s “Complete Guide to Money.”
Read more
335 people found this helpful
Helpful
Report abuse

james sparks
1.0 out of 5 stars Waste of money if you aren't young.
Reviewed in the United States on January 10, 2019
Verified Purchase
I am over 50 and this book is written as though you are just getting started in you life. Depressing to read knowing it does not speak to older people who want to start where they are. Waste of money.
Read more
238 people found this helpful
Helpful
Report abuse

Thucydides
5.0 out of 5 stars Millionaire Myth buster
Reviewed in the United States on January 7, 2019
Excellent study of what makes millionaires in America today. Bottom line up front: An encouraging book for all ordinary but dedicated people who wish to build extraordinary wealth.

Chris Hogan surveyed 10,000 people with a net worth of more than $1 million, then looked at characteristics that would explain their success. He found, contrary to popular belief, the 10,000 were ordinary people who built their wealth slowly through mutual funds, IRAs and company 401K plans. Over 2/3 had averaged less than $100,000 per year in income and one of the top 3 professions was teacher. He found 97 % didn’t inherit their millions, but used discipline, hard work and low risk investments to accumulate wealth.

Next, Hogan discovered the five most common traits among the 10,000 millionaires and proposes those of us who emulate these traits should also be successful. The 5 traits are taking personal responsibility, practice intentionality, be goal oriented, work hard and consistency.

Hogan intersperses stories of individual millionaires along the way to illustrate his points. This results in an engaging, easy to read book. People looking for get rich quick schemes will be disappointed as will anyone who wishes to fault his logic. If, for example, one would argue a high paying job is necessary to building wealth, Hogan counters with his survey results: 1/3 of millionaires never had $100,000 income in a year, only 31% averaged $100K and only 7% averaged over $200K.

Bottom line is for the average Joe who thinks he can’t get ahead, this book will outline a straightforward, although lengthy process for achieving millionaire status.
Read more
209 people found this helpful
Helpful
Report abuse

Erica M
1.0 out of 5 stars Dissapointed
Reviewed in the United States on January 9, 2019
If you are an avid Dave Ramsey follower you do not need this book . I was really excited about this book and was planning on buying it , however I am so glad I got it from the library instead . This book is like a pep rally. I wasn’t looking for motivation , I already have that . I was looking for data and facts . But this book is repetitive and an insult to those who follow Dave . We already listen we know this stuff . One reviewer has already summed it up .. I’m only halfway through but so far nothing new and groundbreaking .
Read more
200 people found this helpful
Helpful
Report abuse

Amy Davis
1.0 out of 5 stars Not impressed
Reviewed in the United States on January 10, 2019
Verified Purchase
Very disappointed. No real content or data in the book, just more of the same.
Read more
114 people found this helpful
Helpful
Report abuse

T. Skinner
3.0 out of 5 stars Great for a person new to Chris or Dave
Reviewed in the United States on January 9, 2019
Verified Purchase
For an avid Ramsey fan there’s not much here that’s new. Was largely same content as other books by DR and the DR group. Why I bought it was I was looking for more information interpolated from the data. I would like to have seen more and broader lists and graphs of characteristics and statistics about the everyday millionaires and their habits.
Read more
95 people found this helpful
Helpful
Report abuse

Nick Ellis
3.0 out of 5 stars It has been written before.
Reviewed in the United States on January 7, 2019
The book is somewhat informative but highly repetitive. There is nothing in this book that is not covered in "The Millionaire Next Door."
The book has some action steps but is mostly cheerleading, encouragement, and shameless plugging of other Dave Ramsey Products.
Read more
124 people found this helpful
Helpful
Report abuse
See all reviews

Avid Reader
2.0 out of 5 stars There's nothing new here
Reviewed in the United Kingdom on January 15, 2019
Verified Purchase
Despite all the much-publicised research that was carried out for the book, there's precious little of it on show here. If you were looking for something with the depth of 'The Millionaire Next Door,' then forget it.
That's not to say that the content isn't valuable - it's just that if you're aware of Dave Ramsey and listen to his podcast, there's no reason to buy this book. It's mostly fluff and repetition, with a good dose of cross-promotion for other Ramsey endorsements thrown in.
If you're not aware of Ramsey or Hogan's work, then I'd encourage you to have a look at their debt/wealth planning advice. But if you're already a reader or listener, then you might as well save your money. A shame - bit of a wasted opportunity really.
Read more
27 people found this helpful
Report abuse

P Geraghty
5.0 out of 5 stars The typical Millionaire profile
Reviewed in the United Kingdom on April 18, 2019
Verified Purchase
I am a huge Ramsey Solutions fan and had read many negative reviews of this book before purchasing it but It turned out to be a great read. It confirms all of the teachings the guys at Ramsey solutions preach about - live on less than you make, have an emergency fund, clear debts as soon as possible, invest and invest with a profession that knows what they are doing. The book details the high correlation between specific traits (rather than backgrounds) that the typical millionaire has and what you should be doing in order to follow the same path. I would recommend this book to any 'millionaire mindset' hunter. Be positive and open minded.
Read more
6 people found this helpful
Report abuse

eily31
5.0 out of 5 stars If you want financial inspiration for 2020, this is the book for you.
Reviewed in the United Kingdom on November 27, 2019
Verified Purchase
This book will inspire you to aim higher with your finances. The millionaire examples are great and some of the facts about them are really eye opening. I enjoyed it.
Read more
One person found this helpful
Report abuse

Aaron Thompson Sommers
5.0 out of 5 stars Great Read
Reviewed in the United Kingdom on April 3, 2021
Verified Purchase
Well worth the read. Very informative and something all adults could benefit from. Will certainly be recommending to friends and family.
Read more
Report abuse

Rob Calvert
1.0 out of 5 stars BOOOOOOO
Reviewed in Canada on January 30, 2019
Verified Purchase
I had high hopes for this book...and annoyingly enough, it turns out this is quite easily THE WORST financial advice that can be given to ANYBODY pursuing a wealthy life. If you have ANY financial common sense, it is easy to see that the sample size in this book is skewed, as there are plenty of millionaires that defy the bogus statistics presented. The advice given in this book specifically panders to gullible newbies that buy into the fact that the only source of financial freedom comes when you're on your death bed, after being such a good boy/girl saving your money your whole life, and paying an adviser 100,000 dollars in fees to manage your less than mediocre portfolio for you. This method of thinking is very dated, generic and quite sad. For anyone pursuing financial freedom sooner than age 95, do not purchase this book.
Read more
8 people found this helpful
Report abuse
See all reviews
Back to top
Get to Know Us
Make Money with Us
Amazon Payment Products
Let Us Help You
EnglishChoose a language for shopping. United StatesChoose a country/region for shopping.
© 1996-2021, Amazon.com, Inc. or its affiliates