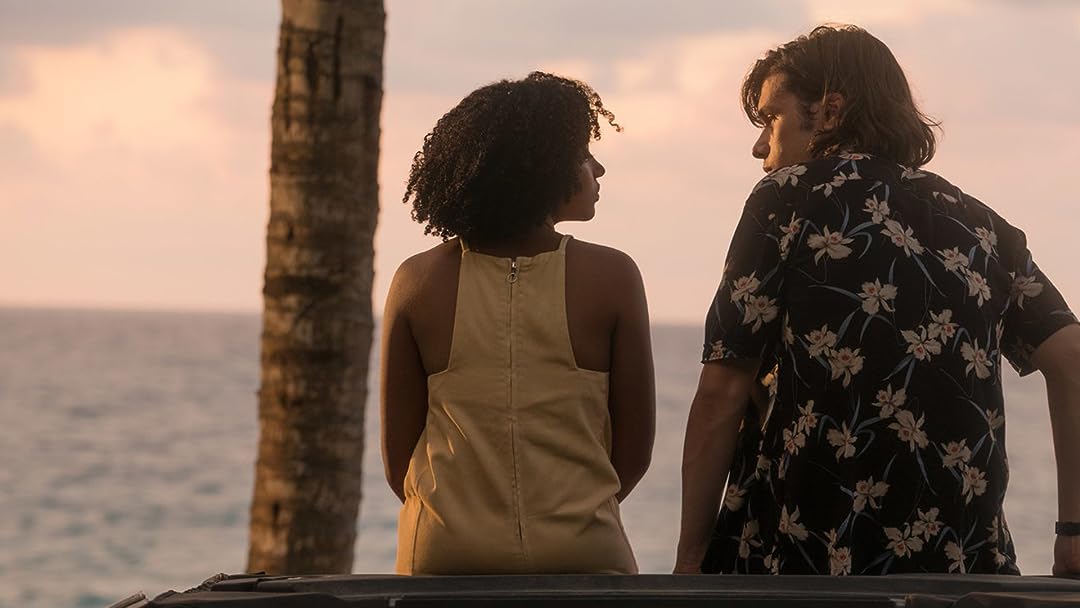 (5,399)
2017X-RayPG-13
A teenager who cannot leave home due to an illness, falls for the boy next door. Their deep bond leads them to risk everything to be together…even if it means losing everything.

Christina ReynoldsReviewed in the United States on November 5, 2020
3.0 out of 5 stars
Great movie. Terrible source material.
Verified purchase
Everything, Everything is a 2017 American romantic drama film directed by Stella Meghiea and written by J. Mills Goodloe, based on Nicola Yoon’s 2015 novel of the same name. The film was produced by Elysa Dutton and Leslie Morgenstein and stars Amandla Stenberg and Nick Robinson and follows a young woman named Maddy (Stenberg) who has a serious medical condition that prevents her from leaving her home, and her neighbor Olly (Robinson), who wants to help her experience life and they begin falling in love.

I suppose I will start with the most obvious praise this film deserves; The performances by both Stenberg and Robinson are grounded in that this story feels remarkably believable. Maddy’s condition is an obvious centerpoint of their relationship, but this film is void of melodramatics and doesn't depend on exaggerated interactions to make the audience understand how these two young adults feel about one another.
Regardless, I would have liked to have seen more palpable anxiety on Maddie's part regarding her condition and the constraints related to it because at times her casual nature seems to ultimately downplay the severity of it (hold this thought). It is possible that her disposition is a result of her being “used” to the lifestyle imposed upon her, but that doesn’t explain the nature in which other characters project their worries about her safety on to her during moments where it seems unnecessary and flippant.

It only makes sense that this is based off of the book, and the good news is that this movie may even be better than the novel is based off of. The scenes in which characters are using Electronics to communicate with one another or brought to life in a way that is visually appealing and speaks to the amount of imagination and creativity that Maddy is capable of. In addition to this, brief moments are included in the film that are not in the book when we would absolutely expect them to be - like the scene when Olly tapes bunch of pictures of the ocean to Maddy’s - and this adds an ultimately more romantic and chivalrous aura to their relationship. This ultimately fits the pacing of their relationship developing that the movie intends to embrace, and I applaud Meghiea for making artistic changes that ultimately tell a more refined story in a limited amount of time.

Despite the compliments that can be awarded to ‘Everything, Everything’ I honestly felt rather angry when I was done watching it. I can only say this as someone that doesn't have a chronic illness that affects my life in the same way that Maddy’s does, but the plot twist and the conclusion ultimately feels disrespectful to people that are able to relate to her as a character. More than that, all I can say is that the twisted attempt to make the overall plot in some ways related to a gesture of love following a traumatic event is perhaps even more disrespectful. I had planned on taking this anger out on my movie review and giving this a one or two star, but the sad truth is that this film is ultimately well done and is sadly really close to its source material. I have decided to redirect my energy and just announce in the most polite way possible: The story this movie is based off of SUCKS.

I can’t say I like this movie enough to enthusiastically recommend it, because my conscience doesn’t allow me to.
I will say, however, this is a most impressively coordinated train wreck.

MacReviewed in the United States on August 16, 2017
5.0 out of 5 stars
PERFECT!
Verified purchase
PERFECT!
Great thru the end!
I've never seen the lead actress before - she was wonderful, sweet, innocent - believably!!! Really enjoyed her journey.
The lead male - remember him as a kid - he was perfect for the quietness this movie has - there is a lot of not talking "texting/emailing" - this type of interaction tends to be annoying with the dings and what ever sounds the receiving and sending texts and emails makes... it was barely noticeable, more like a great old silent film - when the actors had to actually act - you can feel and understand them.
One of the Top Best "1st young love" stories!
Everything I'm looking for in a movie - happy with it as it is, could keep watching more, will definitely watch again and again!
17 people found this helpful

Burlingtina VinesReviewed in the United States on August 27, 2020
3.0 out of 5 stars
It almost had me until the plot twist.
Verified purchase
As someone who grew up very similar to the main character, I was so happy to see representation of people with medical conditions that make you housebound fall in love. I don't have the same health conditions, but I live pretty much the same.

Unfortunately, the plot twist killed the relatability for me.

It would have been perfect if the plot twist wasn't there.

Insead of cheering for the main character, she moved on into that void of unrelatable and unrealistic characters for me.

The trailers gave me hope that I would finally see someone like me in a movie.

I'll give it points for not being super ableist.

It was a good try, but it just left me irritated.
3 people found this helpful

Twyla TurnerReviewed in the United States on August 14, 2017
5.0 out of 5 stars
It's EVERYTHING!!!
Verified purchase
I said it after I first saw it in the theater and I'll say it now...Everything, Everything is EVERYTHING!!! I adore this movie. The book was sweet, clever, and refreshing and so is the movie. I'm 38 years old, and I've been waiting for this movie for about 30 years. Seeing a black girl find love and being loved on and adored finally on the big screen moved me to tears. The movie isn't even sad and I found myself wiping away tears. In all my years, I've never seen anything like it on the big screen. A black girl being appreciated for her natural hair, dark brown eyes, and just her as a regular girl touched my soul. So thank you to Nicola Yoon for writing the book and to the producers and director for bringing her vision to film. Bravo!!!

KWReviewed in the United States on June 7, 2019
5.0 out of 5 stars
Loved it! Feel good story!
Verified purchase
I watched this right after finishing the book and it was great! The casting was absolutely perfect! I will say I think the story was lacking a little bit for me in the development of the romance as compared to the book, but that’s par for the course with any book turned movie. I really just wish they hadn’t skipped the “imagine what a kiss would be like” moment followed by her literally imagining what a kiss would be like, which is what every teenage girl does. These two actors though were phenomenal, and I can’t wait to see them in more things.
2 people found this helpful

Amanda Panda clarkReviewed in the United States on November 29, 2017
5.0 out of 5 stars
Great love story.
Verified purchase
I am in love with this movie .. i love amandla and nick together.. i was crying when they were crying, i smiled when they smiled. Ita a really awesome movie.. the characters moved me in a lot of ways . Happy , sad, nervous. They did a wonderful job.. i wish i had a olly to look at me the way he looked at maddy..
9 people found this helpful

Amazon CustomerReviewed in the United States on June 28, 2020
5.0 out of 5 stars
BEST MOVIE EVER!!
Verified purchase
FIrst of all, I just love the female character. Not only did she do an AMAZING job in The Darkest Minds, but she really shined in this movie as well. After reading the book, I immediately fell in love with the plot and characters so I just HAD to watch this movie. I just want to thank the author, Nicola Yoon, for creating this amazing book that warmed my heart and opened up a new perspective for me to look at the world through. Even though Maddy was trapped in her house for all of her life, the author somehow made a connection between Maddy and the reader and made it so relatable. Her mother is overprotective, like all our mothers are (except hers is an extreme case) and the relationship between them is nearly tangible. Of course the romance is on point, I love how she added the emailing/texting thing to make it kinda cheesy but honestly it was so cute! The movie really portrayed the important scenes and I lovvveeeddd the scenes in Hawaii. It was so beautifulll! I swear I could keep watching this movie over and over and never get bored. It made me feel so many emotions and honestly kinda feel like crying right now thinking about it. I was so happy that in the end, they found each other and decided to leave behind the past and start a new future TOGETHER (they were so meant for each other). Anyways, I should shut up now because this is pretty long so whoever reads this (most likely no one), I hope you understand how much I loved this!

P.S: I would also like to add that you should probably watch the movie BEFORE you read the book because if you do it in the opposite order, you might feel disappointed since the movie doesn't cover as much as the book does. I have always preferred the books over movies so obviously I have bias, but I was highly recommended reading the book after! The romance in the movie is pretty fast paced and it seems like it's happening all at once after only texting each other a few times, but I swear it was much slower than that in the book (which is why I love them so much because they have SO MUCH detail).

MaxineReviewed in the United States on January 16, 2020
5.0 out of 5 stars
"Everything, Everything, is like falling in Love for the first time" ---by MTV News
Verified purchase
Did not have any negative thoughts nor dislikes about this product. The Movie covered parenting, teenage choices in life of maturing through experiences, good ones and bad ones, with parents and friends and Doctors and Hospitals and Sex for the first time even while restricted by her Mother from going outside of the house by using false situations and symptoms the teenager does not have. WOW! That's Life of Miss-trust when you begin to research and stumble upon the Truth through Learning new experiences and new information in life.
One person found this helpful
See all reviews
Back to top
Get to Know Us
Make Money with Us
Amazon Payment Products
Let Us Help You
EnglishChoose a language for shopping. United StatesChoose a country/region for shopping.
© 1996-2022, Amazon.com, Inc. or its affiliates