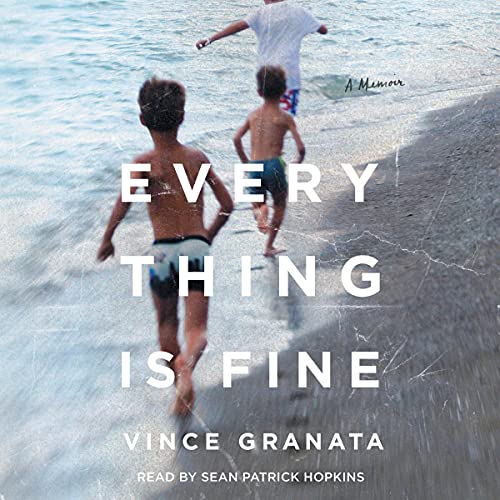 Everything Is Fine: A Memoir

Grief, mental illness, and the bonds of family are movingly explored in this extraordinary memoir “suffused with emotional depth and intellectual inquiry” (Rachel Louise Snyder, author of No Visible Bruises) as a writer delves into the tragedy of his mother’s violent death at the hands of his brother who struggled with schizophrenia. Perfect for fans of An Unquiet Mind and The Bright Hour.

Vince Granata remembers standing in front of his suburban home in Connecticut the day his mother and father returned from the hospital with his three new siblings in tow. He had just finished scrawling their names in orange chalk on the driveway: Christopher, Timothy, and Elizabeth.

Twenty-three years later, Vince was a thousand miles away when he received the news that would change his life - Tim, propelled by unchecked schizophrenia, had killed their mother in their childhood home. Devastated by the grief of losing his mother, Vince is also consumed by an act so incomprehensible that it overshadows every happy memory of life growing up in his seemingly idyllic middle-class family.

“In candid, smoothly unspooling prose, Granata reconstructs life and memory from grief, writing a moving testament to the therapy of art, the power of record, and his immutable love for his family.” (Booklist)

Enjoy a free audiobook + more
Learn more about Membership
List Price: $18.89
You Save: $2.36 (12%)
By completing your purchase, you agree to Audible’s Conditions Of Use
Sold and delivered by Audible, an Amazon company
Share

4.5 out of 5 stars
4.5 out of 5
290 global ratings
How are ratings calculated?
To calculate the overall star rating and percentage breakdown by star, we don’t use a simple average. Instead, our system considers things like how recent a review is and if the reviewer bought the item on Amazon. It also analyzes reviews to verify trustworthiness.
Top reviews

Debby D. Flower
5.0 out of 5 stars Wonderful, tragic, courageous read.
Reviewed in the United States on April 28, 2021
Verified Purchase
What happens when a beloved son and brother murders his mother in the middle of an untreated schizophrenic episode? Why was Tim’s schizophrenia untreated in spite of his caring, knowledgeable family? How does a family make sense of a senseless tragedy? Vince Granata wrote an unforgettable memoir of his family. The book doesn’t preach but it acknowledges and identifies some of the horrible problems facing the mentally ill and their loved ones. It’s worth reading, and in spite of time traveling back and forth through childhood, the murder and putting together lives after, it’s a well structured book that is easy to follow.

I spent lots of my reading time in tears. Traveling through the years, from when the triplets first came home as infants to the suburban Orange, CT home where Claudia will eventually be murdered to worrying that a college aged Tim was suicidal or violent, the story of this family is filled out. The book began when the author is notified of his mother’s death. We understand more of Claudia, the Mom, through the author’s stories, her lists, her music choices, her collection of books on mental illness that Vince found after her death as she attempted to find a way to help her youngest son survive and thrive. There are no happily ever afters in this memoir but there is the courage and perseverance of this family to find a way through tragedy. Five Stars.
Read more
11 people found this helpful
Helpful
Report abuse

carilynp
TOP 500 REVIEWER
5.0 out of 5 stars Told with remarkable compassion, strength and enlightening in its understanding of mental illness.
Reviewed in the United States on May 3, 2021
Verified Purchase
There is no sugar coating in this book. But the author does gently guide you into the history of his immense world of pain and the unfathomable road ahead of not only losing his mother to a gruesome murder but that it was done at the hands of his own brother.

Granata has a captivating way of bringing you into his childhood, setting the background by laying the foundation leading up to the fateful day when one of his younger brothers, Tim, one of triplets, in a psychotic breakdown, kills their mother in their childhood home.

Vince explains how schizophrenia, a severe mental disorder, took control of Tim’s mind. And, how he was able to eventually separate their mother’s violent death to preserve the loving memories of her and their once-intact family as well as coming to terms with being able to forgive his brother.

The memoir is told from the perspective of a man who does not wish to erase his family, his past, his devoted mother, or the day he remembers his three newborn siblings coming home from the hospital where he excitedly welcomed them with a sidewalk chalk written message. Imagine the feat that it took to overcome the hurt, anger, and frustration to find forgiveness while coping with such massive grief. A family tragedy told with remarkable compassion and strength and enlightening in its understanding of mental illness.
Read more
6 people found this helpful
Helpful
Report abuse

Pamela Hartman
5.0 out of 5 stars Amazingly Therapeutic
Reviewed in the United States on May 16, 2021
Verified Purchase
My family just recently suffered the loss of two family members at the hands of another family member who is mentally ill. My brother and his wife, who was also my closest confidant, are gone. There are so many unanswered questions, so much confusion, pain, and a long journey ahead of us before we can begin to understand something. But I can relate to many of the words in this book. My heart is broken beyond words. My life has changed forever. And I don’t know if I’ll ever be able to reconcile what has happened. But this book has given me great comfort. I’m not alone. Thank you, Vince, for sharing your story and for helping me sort through some of the confusion. Thank you.
Read more
5 people found this helpful
Helpful
Report abuse

Rosalie Haas
5.0 out of 5 stars Illuminating
Reviewed in the United States on May 3, 2021
Verified Purchase
I agree with the reviews which praise this heartfelt rendering of a family's pain in the midst of psychosis. The author also outlines so many failures in treatment that led to the killing of his mother by his brother. It was he who refused treatment. I may be naive, but the only way this killing could have been prevented, as I see it, would have been to lock him away at Whiting permanently and earlier. He had already attempted to kill his other brother by strangulation, so his psychosis was already screaming violence. This story left me with such conflicted feelings on both "sides." I do want to end my review with compassion and prayers for all of the members of this family.
Read more
4 people found this helpful
Helpful
Report abuse

Rosemary Daniell
5.0 out of 5 stars A Brave, Honest Story!
Reviewed in the United States on June 26, 2021
Verified Purchase
When the unthinkable happens, it’s hard to think or write about. All I can say is I could have been Vince Granata’s mother under other circumstances, and this is what partly I’m writing about in my new memoir in progress, tentatively titled My Beautiful Tigers: Forty Years as the Mother of an Opioid Addicted Daughter and a Schizophrenic Son. I had the good fortune to see healing take place, despite equally devastating circumstances. Vince, thank you for your courage in writing this story!
Read more
3 people found this helpful
Helpful
Report abuse

Janyce K. Mose
5.0 out of 5 stars Valuable insight
Reviewed in the United States on August 14, 2021
Verified Purchase
Author did a very good job to be fair and unbiased about psychoses and its effect on humans. I wish he could have cited some of the statistics in his last chapters. Also, he failed to consider or comment on the ethical issues re forced medicating and requiring people without rational abilities to make decisions to take medications. Yes, homelessness, etc., may not be “serious untreated”, but it’s still a major cause or result of psychoses and is almost impossible to change without rational decisions.
Read more
Helpful
Report abuse

Kindle Customer
5.0 out of 5 stars Hard to like; impossible to put down
Reviewed in the United States on May 14, 2021
Verified Purchase
Death of too many loved ones has lead me to search to understand. My journey of unraveling the mystery of the minds in my family has been long yet a sign post has always shown up at the right time. This book is like a safe friend who walks with me to hell then out into the sunshine.

Tragedy comes to many, some deny and flee while others choose to witness and learn. This is a critical gift for those who don't look away as a means to help others at least tolerate the fact of diseased minds.
Read more
One person found this helpful
Helpful
Report abuse

Andrew C.
5.0 out of 5 stars An Amazing Memoir About Family, Tragedy, Mental Illness and Moving on After Loss
Reviewed in the United States on May 3, 2021
Verified Purchase
Vince Granata tells his story of family tragedy, trying to make sense of and move on from a horrific event that changed his family forever. It is heartbreaking and difficult to read in sections, but Vince does a good job of taking the reader through the process of grief and tying what happened to his family to broader issues and challenges on we deal with mental illness in the US.

Amazon Customer
5.0 out of 5 stars Fascinating Book!
Reviewed in Canada on May 26, 2021
Verified Purchase
Heart breaking story but truly enlightening! Very well written and shows the mystery of mental health! We need to more for the caregivers of those struggling with mental health issues. We would recommend this book to everyone because someone you know has family with mental health issues.
Read more
Report abuse
See all reviews
Back to top
Get to Know Us
Make Money with Us
Amazon Payment Products
Let Us Help You
EnglishChoose a language for shopping. United StatesChoose a country/region for shopping.
© 1996-2022, Amazon.com, Inc. or its affiliates