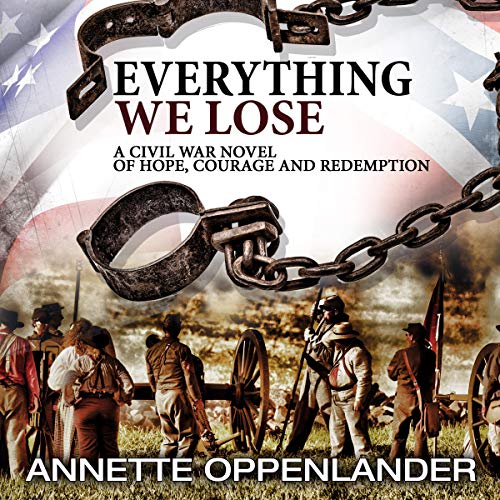 Everything We Lose: A Civil War Novel of Hope, Courage and Redemption

Annette Oppenlander (Author, Publisher), Alan Taylor (Narrator)
4.6 out of 5 stars 83 ratings
See all formats and editions
Sorry, there was a problem loading this page. Try again.

Two friends - one black, one white - torn apart by an attack gone wrong. One escapes into war, the other is sold into slavery.

Told from alternating viewpoints, one black and one white, Surviving the Fatherland author Annette Oppenlander delivers another stunning historical tale set against the epic backdrop of the American Civil War - a breathtaking examination of the power of hope and friendship and the endurance of the human spirit to find a way home.

Tennessee, 1861. Fifteen-year-old farm boy Adam Brown would do anything to protect his friend Tip, a slave at the neighboring plantation - even if it means fighting Nathan Billings, the rich and obnoxious landowner's son. But when it seems his attack has killed Nathan, Adam has no choice but to run away and join the Union Army under an assumed name. Together with Wes, a chatty soldier with a few secrets of his own, Adam embarks on a traumatic odyssey through the war-torn Midwest. As his soul darkens with the atrocities of war, all he wants is to go home. But in order to do that - if he survives - he must face his past.

Unbeknownst to Adam, 16-year old Tip is sold to a farmer who takes drunken pleasure in torturing his slaves. Tip quickly realizes that if he wants to survive, he must run. Ahead lie hundreds of miles of unknown country infested by slave owners, traders, starvation, and cold. And so begins a journey of escape and recapture, of brutal attacks and unexpected kindness.

When a rescue by the Underground Railroad goes terribly wrong, Tip finds himself caring for a pregnant runaway, his journey seemingly at an end. They have reached the Ohio River, a vast, watery expanse impossible to cross. It is only a matter of time before roaming slave traders will pick them up - he will never see his mother and his best friend again.

Amazon Customer
1.0 out of 5 stars Disgusting Book!
Reviewed in the United States on December 22, 2019
Why was it necessary to include the rape of a minor?
Images in this review

Réal Laplaine
5.0 out of 5 stars An excellent read with an excellent message.
Reviewed in the United States on April 23, 2018
Verified Purchase
Everything We Lose: A Civil War Novel of Hope, Courage and Redemption, by Annette Oppenlander.
Annette does it again! I had the pleasure of reviewing her novel, Surviving the Fatherland last year, which went on to become a best seller, and now, this new novel is yet another masterpiece of storytelling. Everything We Lose is a brutal rendering about the lives of two boys, Adam and Tip, a friendship forged near the beginning of America's civil war. Adam, the son of a poor white farmer who went off to war to fight against slavery, and Tip, an Afro-American slave on a nearby rich estate, are caught in the midst of America's hateful racism. In an attempt to defend Tip from brutality at the hands of his "owners", Adam is forced to flee his home and eventually joins the Union to fight against slavery, following in his father's footsteps. Meanwhile, Tip yearns for freedom and sets off on his own harrowing journey to find it. The two stories are extremely moving, gut-wrenching at times, and the lucidity of its descriptions and the scenario of war over the principles of equality and justice are weaved throughout the book in a way that reminds us that such base motives as hatred and racism have no place in a true democracy. Just when you think there is light at the end of the tunnel, when relief is in sight, the author casts you back into the murk, but there is always the one constant which these two friends
refuse to let go of - hope! An excellent read with an excellent message.

doris lynch
5.0 out of 5 stars A Captivating Civil War Novel That Will Touch Your Heart
Reviewed in the United States on March 24, 2019
Verified Purchase
Annette Oppenlander proves her adeptness at historical fiction again in this tense but heartfelt novel about the Civil War seen through the eyes of a poor farm boy, Adam, and a black slave, Tipper, who lives nearby at a plantation in Tennessee. Despite the differences in their lives and freedoms, Adam and Tip have a strong bond; both share a love of learning, and a great curiosity about the world. Tip sneaks over when he can to talk to Adam. Adam notices Tip’s mistreatment—the open wounds and head injuries caused by whippings and beating by the plantation owner’s son, a Billings. At one point, Adam and his Ma, risk all by bringing Tip back to their farm after he has been assaulted near death. This causes a ruckus in the small town, and a judge fines Adam’s Ma a huge amount, one she cannot afford unless she sells the farm. The judge also forces Adam and his mother to release the Billings’ property (Tip) back to his owners. Soon an encounter between Adam and the young Billings causes Adam to flee, and Tip to be sold to a small farmer, whose face looks as cruel as he is. In alternating sections, we follow the Civil War fates of these two men. Adam signs up with the Union soldiers as Tip struggles to find a way to escape north, across the Ohio, to where a slave can become free. Oppenlander creates living, breathing characters that you root for or hate, and her knowledge and research of the Civil War enable the reader to feel a part of the battles and the endless drudgery of camp life. Adam aspires to be a veterinarian, and a side theme of caring for army horses (the tanks of the Civil War) proves intriguing. An exceptional read that will leave your heart touched and your mind stimulated by what life was like during our bloodiest war.
Read more
3 people found this helpful
Helpful
Report abuse

Scott Arquilla
5.0 out of 5 stars ... a history buff and recall from my youth the great book, Johnny Tremain
Reviewed in the United States on February 27, 2018
Verified Purchase
I am a history buff and recall from my youth the great book, Johnny Tremain. This book is historical fiction also but the detail provided describes life in the Civil War. Everything We Lose is a story of two friends, Adam, a white teenager of moderate means and Tipper, a black teenage slave, who desires to become free. The story starts with the death of Adam's father, a Union soldier, during the early months of the War and develops as the two friends go separate ways over the next three years. The two believe all is lost of their youth and families over that period but the end of the War brings the two back together to rebuild the South from the devastation of the last four years. The author does a wonderful job describing actual events and brings reality to both characters. I strongly recommend this book as well as the author's award winning, wonderful book, Surviving the Fatherhood.
Read more
2 people found this helpful
Helpful
Report abuse

William C. Oris
5.0 out of 5 stars Civil War in Tennessee Comes to Life
Reviewed in the United States on March 13, 2018
Verified Purchase
Annette Oppenlander's latest historical fiction, "Everything We Lose ...", covers aspects of the Civil War that are both well chronicled and unexpected. Adam, the white hero, hails from Union-sympathizing (or at least tolerant) Tennessee (actually, from Greeneville TN, which was home to Andrew Johnson, Lincoln's second VP and successor). Tip, the black hero, encounters both good and evil on his journey to freedom. I enjoyed reading of some of the Tennessee campaign battles, which (for me at least) are not as extensively covered as those further East. Being from Ohio, I appreciated seeing reference to Cincinnati as a critical hub for the Underground Railroad. And as a lover of Dickens' works, I liked the prominence of "Great Expectations" in the story, and had some fun finding Dickensian references along the way. This book is well researched, an easy read and covers the key opposing themes one wants to see in a Civil War novel -- hope vs despair, love vs hate, friendship in the face of adversity, the importance of home and the need to journey away in order to really appreciate it. If you are a history lover, a Civil War buff, or just want to read a really good story, go for it!
Read more
One person found this helpful
Helpful
Report abuse

Richard Frank
4.0 out of 5 stars A fun fast read about the Civil War
Reviewed in the United States on August 24, 2018
Verified Purchase
A nicely woven story about a black slave and a young white man who were friends growing up in the South.
Good depiction of the living conditions faced in slavery as well as the hard life faced by white working farmers. The book also touches living conditions of both Union and Conferate soldiers, and the brutality of the battles.
The story line is a bit far fetched, but attempts to describe some of the difficulties faced in the legal justice system, and the brutality of life back in the 1860’s.
Read more
Helpful
Report abuse
See all reviews

Debra Wells
5.0 out of 5 stars A must read
Reviewed in the United Kingdom on July 20, 2018
Verified Purchase
Thoroughly enjoyed this story, a couldn't put down book. I felt like I was there with Adam and Tip, it really pulled me in. I didn't want it to end and was wide eye when it did. This is my 2nd book from this Author read in succession from her true life Fatherland book, I loved her style that much I needed to carry on. Thank you, Annette Im, now of to find another x
Read more
Report abuse
See all reviews