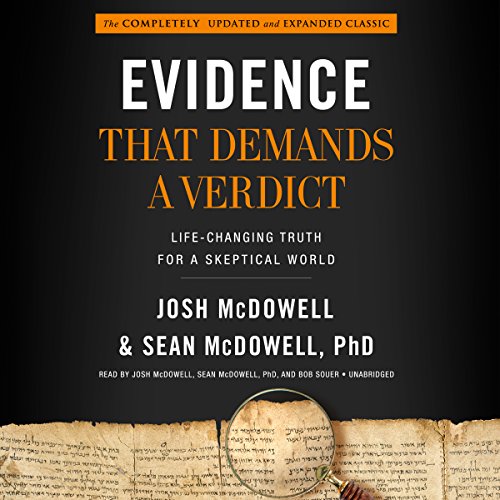 Evidence That Demands a Verdict: Life-Changing Truth for a Skeptical World

The modern apologetics classic that started it all is now completely revised and updated - because the truth of the Bible doesn't change, but its critics do. With the original Evidence That Demands a Verdict, best-selling author Josh McDowell gave Christian audiences the answers they needed to defend their faith against the harshest critics and skeptics.

Since that time, Evidence has remained a trusted resource for believers young and old. Bringing historical documentation and the best modern scholarship to bear on the trustworthiness of the Bible and its teachings, this extensive volume has encouraged and strengthened millions.

Now, with his son Sean McDowell, Josh McDowell has updated and expanded this classic resource for a new generation. This is a book that invites listeners to bring their doubts and doesn't shy away from the tough questions.

Your audiobook is waiting!
Learn more about membership
List Price: $41.97
You Save: $5.25 (13%)
By completing your purchase, you agree to Audible’s Conditions Of Use
Sold and delivered by Audible, an Amazon company

Amazon Customer
5.0 out of 5 stars A Great Resource for Christians
Reviewed in the United States on October 4, 2017
I read the older version of the Evidence That Demands A Verdict before, but after reading through the updated and expanded edition, I must say, I'm liking it a lot. The authors tell us from the very beginning that "it's been specifically created to equip Christians, so they can know what they believe, why it is true, and how to communicate Biblical truth to a skeptical world." The book clearly delivers on that. More than a book to give to a non-believer in Christianity, it is a great resource for Christians to have in their ministry library. The hardcopy is pretty chunky, but it's very easy to read (Two columns in a page, which helps people like me who lose track in an essay format!).I really love the Appendix: Responding to the Challenges of Bart Ehrman. Whenever I engage in conversations with atheists or agnostics on college campuses, they often quote or cite Bart Ehrman to support their view on God, the Bible, and so forth. Instead of going through all the books by Bart Ehrman (I have most of it), it saves me tons of time simply to look at the Appendix.
Images in this review

K. and A. Butcher
5.0 out of 5 stars A must read for anyone looking for answers.
Reviewed in the United States on October 8, 2017
Verified Purchase
It's hard to write an unbiased review for a book that changed your life, even if it was a previous edition. I think however, it's because I am naturally skeptical that I can be fair handed and even.
To begin then; why, another edition. This is a book that has been around in different editions for 40 years. When an "updated", "new and improved" anything comes out, I am the first to raise an eyebrow as to what the motivation is. In this case, it's simple, both the challenges and the evidence available to the truth of Christianity is a constantly evolving thing, this is a book that in reality could be re-released every 20-30 years with no problem.
Now to the book itself, it is a reference book first and foremost, it is not light reading, in fact it is quite intellectually taxing. It's designed for you to go to a particular section and gather information to answer a particular question, and in this area it is outstanding. The contents are well laid out so you can find what you need quickly. Questions or challenges are addressed concisely and thoroughly and with good cross references if you are looking to go deeper. I wouldn't suggest reading cover to cover in one sitting (though you can if you desire), take your time, let the information simmer, because there is a lot to take in.
In my opinion, this books greatest strength is its honesty. It is not afraid to present opposing views against Christianity, even when the evidence for faith in that subject can sometimes seem a little light, more than once I found myself wanting the authors to claim absolute undeniability, but that would detract from the overall strength of the honest, accumulative argument. There is no silver bullet either For or against Christianity, you have to weigh the evidence for yourself, honestly, and go from there, for me this book is a scale tipper.
The first time I read this book it helped bring me to a strong intellectual Christian faith, this time, it helped me go even deeper and provide even more answers to what, for me has been a journey with many questions to a faith in Jesus Christ.
ANYONE with an open mind, from staunch atheist to staunch Christian, with any questions about the truth of Christianity will benefit from reading this book, I couldn't recommend it more.

This book contains no actual evidence for the existence of a god or for any of the supernatural elements contained in the stories found in the Christian bible. I find it a bit sad that all of the Christian apologetic arguments simply fail. Obviously these types of books are not written for skeptics, atheists or people who adhere to other religious beliefs because most of these people would find any of the information convincing. These books are written as Christian propaganda for Christian believers to bolster their ”faith.”

Davews
2.0 out of 5 stars Vastly over rated
Reviewed in the United Kingdom on June 10, 2019
Verified Purchase
Not sure what to make of this book. Yes, it is huge, 800 pages, and already the binding is showing signs of failing. 80 pages of introductions must be a record in itself. Did it really need to be so big? I have only so far read a couple of sections. I read the section on the crucifixion and resurrection to see how his views compared with the classic Who Moved the Stone. I came away not knowing any better. Largely consisting of various quotes from people I had never heard of and attempts to dismiss them all, but little original thought. Then I thought I would look at a few more topics from the Bible and realised it was virtually impossible just to dig in at random. The so called 'subject' index has no mention of the Nativity, Noah's Ark, the Ten Commandments or even Feeding the Five Thousand. No doubt all of those are discussed within its many pages but the index was no help. I see there is a section on the virgin birth, will read when I have time.
For all its rave reviews I somewhat feel it misses the point. Nobody is going to sit down and read all 800 pages from start to finish and although it clearly has some useful content finding it is hard. Hardly light reading either. If the aim is to convince sceptics that there is a Lord they are the least likely to read and digest. I expect my copy will sit on my bookshelf unread.
Read more
9 people found this helpful
Report abuse

Valentin
5.0 out of 5 stars Challenging read for the untrained brain but so well worth it!
Reviewed in the United Kingdom on February 5, 2018
Verified Purchase
This is a huge book! I really like it but I also find it a tough read as it is quite academic in style and unless you want to go to the bottom of the nitty gritty on all possible fronts, you may find this reading tiresome. However, if you want to explore the claims (and there are many covered in the book) that are often made against the Bible and all surrounding aspects, this is your in-depth read! I also like the fact that all the different issues and aspects studied in this book are treated in a very orderly fashion, so one can use this book as a quick reference on a given specific issue . This is not a book exciting the imagination or that you can read in-between, rather, it requires focus and thinking but if you want to be proficient or have a super-good reference book, this is it!
Read more
9 people found this helpful
Report abuse

A Customer
5.0 out of 5 stars An essential resource for all Christians
Reviewed in the United Kingdom on October 27, 2018
Verified Purchase
I've only flicked through a few pages since my copy arrived but this looks set to be an outstanding book. Josh and Sean have given the church an incredibly detailed resource for defending the key beliefs of Christianity.

I think the biggest strength of the book is that it's virtually an encyclopedia of primary source quotations from a huge range of authors and scholars, both Christian and non-Christian. This means the book provides an easy way to access a vast amount of scholarship in one place and at a fraction of the price.

The new edition also means the book is up to date with the latest scholarship. There's also a new prologue on a Theistic Universe which briefly covers the latest debates on topics like consciousness, determinism, multiverse theories and morality. Plus a new appendix responding to Bart Ehrman's recent attacks on the bible.

All in all this is simply an essential book for every Christian.
Read more
4 people found this helpful
Report abuse

Andrew Lees
5.0 out of 5 stars Good publication.
Reviewed in the United Kingdom on June 10, 2018
Verified Purchase
Evidence that Demands a Verdict (Anglicized): Life-Changing Truth for a Sceptical World