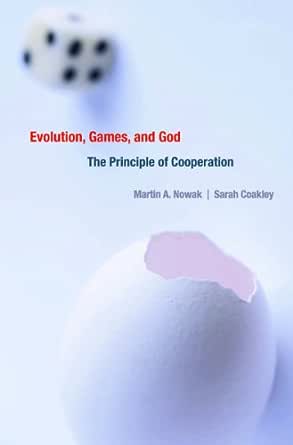 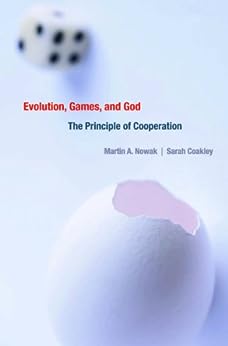 Evolution, Games, and God: The Principle of Cooperation Kindle Edition

The book is almost heroically interdisciplinary, touching on everything from brain science, meerkats and slime molds to experimental economics and the theological concept of kenosis (or divine 'self-emptying').
(Matthew Reisz Times Higher Education 2013-08-08)

A good entry point into the controversial subject of the adequacy of biological explanations of human behavior. (A. C. Love Choice 2013-11-01)

Evolution, Games, and God is perhaps science and religion at its best: going further than the somewhat stale debate about whether such a discussion is possible by plunging into a specific topic that is in itself changing rapidly and at the cutting edge of scientific analysis. It also brings in, rather more extensively than some volumes, a philosophical perspective that chastens scientific and theological reflection, without compromising the insights that are possible in both fields of study. (Celia Deane-Drummond, Professor of Theology, University of Notre Dame)

I have been anticipating this book for years and it has exceeded my high expectations. Nowak and Coakley combine the courage of applying a specific evolutionary theory to altruism with the prudence of recruiting sharp minds to explore and challenge their own thesis. The result is essential reading for anyone interested in carefully bringing science into conversation with moral and theological phenomena while avoiding the pitfalls of reductionism. (Ariel Glucklich, Professor of Theology, Georgetown University)

What makes Evolution, Games, and God so interesting and valuable is that the essays collected here, in addition to providing readable introductions to and discussions of the role of game theory in evolutionary explanation, also provide information and/or considerations relevant to the larger question of whether science is now at the point of providing an exclusively naturalist, and even physicalist, explanation of human tendencies that formerly seemed to require the realities of God and soul. The essays deal in an informed and sophisticated way with this and other related questions, and they do so without the venom that characterizes so many other popular treatments of the question of science, faith and morality. (John F. Haught, Ph.D., Senior Fellow in Science and Religion, Georgetown University)

This is an important volume because it completely subverts the idea that the evolutionary narrative is in some profound sense antithetical to theology. Not so. The ‘selfish gene’ as a metaphor makes no sense of biological realities. Co-operation is here to stay, as important at the level of interacting genes in genomic as it is at the level of interaction between organisms. (Denis Alexander Times Literary Supplement 2014-04-04)

Martin A. Nowak is Director of the Program for Evolutionary Dynamics and Professor of Mathematics and Biology at Harvard University.

Sarah Coakley is Norris-Hulse Professor of Divinity and Deputy Chair of Arts and Humanities at the University of Cambridge.

Stephen M. Kosslyn is John Lindsley Professor of Psychology in Memory of William James, Emeritus, Harvard University, and Director, Center for Advanced Study in the Behavioral Sciences at Stanford University.

4.1 out of 5 stars
4.1 out of 5
8 customer ratings
How does Amazon calculate star ratings?
Amazon calculates a product’s star ratings based on a machine learned model instead of a raw data average. The model takes into account factors including the age of a rating, whether the ratings are from verified purchasers, and factors that establish reviewer trustworthiness.
Top Reviews

Steven PetersonTop Contributor: Baseball
VINE VOICE
5.0 out of 5 stars Fascinating, interdisciplinary look at cooperation
Reviewed in the United States on October 19, 2013
Verified Purchase
This is an absolutely fascinating book. It addresses the ineffable, in one sense. The book explores evolutionary theory from several perspectives--scientific, economic, theological, and philosophical. And it works far better than one might have imagined. The focal point is cooperation, defined as (Page 4) ". . .a form of working together in which one individual pays a cost (in terms of fitness, whether genetic or cultural) and another gains a benefit as a result." Backgrounds of the contributing authors is fascinating to consider. Among these: economics, science and religion, theology, history, philosophy, mathematics, biology, and international relations. Truly an interdisciplinary effort--with a strong religious element. Given the critiques of evolution from the religious right, this is an interesting twist.

I find this book to be exemplary, addressing issues that generate a lot of emotion and controversy in the larger public debate from a theoretical dimension. For those who wish to explore an interdisciplinary approach to cooperation, with evolutionary theory as the backdrop, this book will be valuable.
Read more
7 people found this helpful
Helpful
Comment Report abuse

Sandwalk
5.0 out of 5 stars Must read for anyone interested in altruism, cooperation, and group selection
Reviewed in the United States on August 11, 2013
Verified Purchase
Excellent collection, though I was disappointed that there were no essays about literature, the arts, and the role of imaginative works in the evolution of cooperation.
Read more
3 people found this helpful
Helpful
Comment Report abuse

Mark L Sloan
4.0 out of 5 stars Highly useful kick-off for debates about the unsettled science of morality
Reviewed in the United States on June 17, 2013
A more accurate, but less `catchy', main title would have been Evolution, Games, Morality, and the Evolution of Religion. Readers with little interest in religion can be assured that the sections on Evolution, Games, and Morality are not somehow compromised by the presence of the small minority of evolution of religion papers.

I found Evolution, Games, and God highly useful and was delighted to better understand the various, sometimes conflicting, positions presented.

As the editors say, this book "aims to provide a compact and thought-provoking account of the scholarly advances and disagreements in this intriguing field of study, and to serve as a platform for debate."

In that spirit, I would like to add some disagreements of my own about definitions and approaches. Perhaps some readers will find them useful.

We are told in the introduction that "Cooperation is a form of working together in which one individual pays a cost (in terms of fitness, whether genetic or cultural) and another gains a benefit as a result." Also, "Altruism is a form of (costly) cooperation in which an individual is motivated by good will or love for another (or others)." Both are problematic for evolution of morality discussions.

The cooperation definition is more accurately called "costly cooperation". Other forms of cooperation, such as mutualism and coordination in which no one necessarily pays a cost, may have nothing to do with morality and leaving them out of the definition of "cooperation" is confusing.

A definition like "Altruism is a form of costly cooperation in which an individual acts without consideration of future benefits" is much better tailored for science of morality discussions. It avoids nonsense conclusions such as: "It is impossible to act altruistically according to 'Do to others as you would have them do to you' if you expect consistently doing so will be in your best interests over your lifetime." Also, it is consistent with the common cultural meaning of altruism when applied to humans, and, conveniently, collapses to "biological altruism" (and is applicable to all organisms) when cooperation costs and benefits are only reproductive fitness.

Also, Evolution, Games, and God may leave the false impression that the `ultimate' sources of our moral intuitions and cultural moralities are found in species dependent biological evolution and game theory. These sometimes claimed `ultimate' sources are at least one causal level too low. Costly cooperation strategies solve a cross-species universal dilemma: how to obtain the often large benefits of cooperation in groups without being exploited. This dilemma is inherent in our physical reality, independent of any biology or mathematics, and therefore morality's actual ultimate source. Descriptively moral behaviors (such as those motivated by empathy and advocated by enforced cultural moral norms) are most revealingly understood as just different solutions to this universal dilemma.

I would have liked to have seen a good discussion of the necessary and central role of punishment in maintaining virtually all costly cooperation strategies (as the game theorist Herb Gintis likes to point out). Such a discussion would make it much easier to understand the common selection force (cooperation benefits) responsible for the evolution of the emotion guilt (which provides efficient internal punishment for moral violations), indignation (provides motivation to punish other's bad behavior), cultural moral codes (when internalized, violations trigger guilt and synchronized group indignation), religion (supernatural detection and punishment of bad behavior), and rule of law (formally organized and authorized community detection and punishment of standardized definitions of bad behavior).

These comments focus on my disagreements with the text. But disagreements are fully consistent with the book's goals. Those goals were to coherently present well-informed positions in the field to prompt discussions and "to serve as a platform for debate." And this book does that very well.
Read more
9 people found this helpful
Helpful
Comment Report abuse

Galer B. Barnes
4.0 out of 5 stars Waiting for paperback edition
Reviewed in the United States on June 30, 2014
Ignore the star rating here...I haven't read this yet! I'm waiting for this to come out in paperback. It sounds really interesting but I refuse to buy hardcover and don't retain what I read on a device well enough for a book that is possibly as important as this one. Come on Harvard U Press, get this out pbk asap! please!
Read more
One person found this helpful
Helpful
Comment Report abuse
See all reviews from the United States

Robert
1.0 out of 5 stars no math is this book
Reviewed in the United Kingdom on November 2, 2013
Verified Purchase
This book is bad. First it's not a math book which is what you would expect from a Harvard Math professor. On top of that bringing god in the evolution of cooperation does not make any sense to me. Evolutionary Dynamics which Martin Nowak's previous book is much better. I would not recommend this one.
Read more
4 people found this helpful
Helpful
Sending feedback...
Thank you for your feedback.
Sorry, we failed to record your vote. Please try again
Report abuse