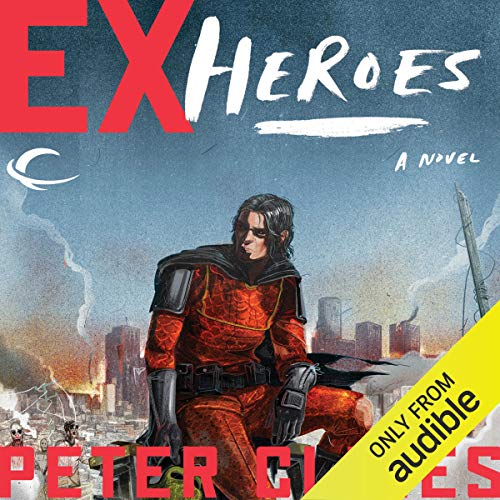 4.4 out of 5 stars
4.4 out of 5
768 global ratings
How are ratings calculated?
To calculate the overall star rating and percentage breakdown by star, we don’t use a simple average. Instead, our system considers things like how recent a review is and if the reviewer bought the item on Amazon. It also analyzes reviews to verify trustworthiness.

Jade
5.0 out of 5 stars Well written and engaging
Reviewed in the United States on June 2, 2016
Verified Purchase
A friend recommended this to me since I have a love of two things: Marvel and Zombies.

I was not disappointed. The story centers around a world that's rapidly changing, people are suddenly so much more than just people, but with the gift of superheroes there is always a price, only this one is more than anyone wanted to pay.

The novel, while in some ways very typical of a zombie genre book, full of gore and violence and all those things, had some twists that were utterly shocking, things that caught me completely off guard. It also took the time to explain the why. As an avid reader and movie-goer, the one thing I have always hated about theme movies and books is that no one ever takes the time to ask the big question, and it's never explored. You have heroes. You have zombies. But unless it's x-men or a radioactive spider or the rare Resident Evil series, no one ever takes the time to explain not only the why but the how. This book does not fail in that regard. It offers insightful history and explanations, and does so in such a mind blowing way.
Read more
9 people found this helpful
Helpful
Report abuse

titania86
4.0 out of 5 stars Superheroes and zombies mix like you wouldn't believe
Reviewed in the United States on October 18, 2018
Verified Purchase
Superheroes of all kinds are cropping up with a wide variety of abilities from superhuman strength to flight, fire breathing to magic. These people have chosen to save those in need and keep their true identities secret. When people start turning into zombies, the heroes mobilize, but the zombies are too widespread and numerous to defeat. They set up a living situation in a movie studio in Hollywood they call The Mount. Everyone contributes and the heroes enforce their laws in addition to scavenging for resources and protecting the people from zombie and human foes alike. A gang called the Seventeens have their own living space and have been largely left alone until they launch an assault on the heroes during a scavenging mission. A new enemy has taken over and is hellbent on making the heroes pay.

Ex-Heroes melds two disparate genres, superhero and zombie apocalypse, and makes them work together in an oddly harmonious way. The superheroes are created by a variety of things like toxic spills or magic with abilities like super strength, breathing fire, speedy healing, and/or flight. These characters follow the same archetypes of famous heroes. For instance, St. George is clearly the overpowered boyscout Superman with slightly different abilities (breathing fire instead of laser eyes). Stealth is similar to Batman with her abilities and more cynical worldview. Chapters are labeled Then from before the apocalypse and Now. St. George is the main character, but each hero gets their own chapter Then chapter and, if still alive, a Now chapter. Then, each hero is fighting crime on a fairly small scale and Now, they are maintaining The Mount and merely surviving.

The zombies (or exes) are pretty standard fare. They are the animated unded. The disease is a bit different. It's a virus that mimics white blood cells thus replicating quickly in the body. It's highly infectious through bodily fluids and survives a long time outside of its host, making dead exes and even smears of blood just as dangerous. This disease isn't fatal and only takes hold after death. The reason why people usually die after a bite is that other diseases piggyback on the zombie disease, making it a toxic mix of every other disease every other person in the line of infection had. I'm not honestly sure how sound the science is, but the concept is intriguing. Further, zombified heroes retain their abilities and create havoc when an uber-zombie with the ability to control other exes has a grudge against the heroes.

Ex-Heroes has a fast pace and interesting stories in the past and present to get to know each hero a little bit along the way. The beginning just throws you into the world and you start to tread water a couple chapters in. My only criticism is in some of the heroes' narratives. Stealth is a beautiful woman in a revealing outfit and she's disgustingly objectified by quite a few of the male heroes. Once is showing a perspective and doing it multiple times just seems immature of the author and the characters. Stealth herself seems more like a robot than a person as if she had to be so different than her appearance to be seen as a legitimate hero. Other than that, I enjoyed the twists and turns. I'm planning to continue the series and I hope the problems I have resolve as the characters get more developed.
Read more
One person found this helpful
Helpful
Report abuse

Robert Carnevali
5.0 out of 5 stars I'm so glad I bought this book!
Reviewed in the United States on February 25, 2014
Verified Purchase
Ex-Heroes seamlessly blends together two genres: the zombie apocalypse and superheroes. But it does it in such a way that neither genre feels exploited, and both become more than the sum of their parts. The writing is smooth, the pacing is perfect, the characters vibrant and compelling. When you read about the heroes and their abilities, it's written in such a way that their powers aren't overly glorified, making them seem more real and less like fantasy.

The basic premise is that an infection broke out in Los Angeles that kills people and then reanimates their bodies. The infection spreads and become global. Superheroes are relatively new to the world, and the few that exist work to at first contain the infection, then to save as many people as they could. The heroes in Los Angeles turn to Paramount Studios with its high walls, clean it out, and make it a home for a few thousand people. Going out on scavaging runs with regular human survivors, they try to find more survivors and supplies. Besides the walking dead, they also get attacked occasionally by survivors of a local gang called the South Seventeens. The drama explodes when the S.S. turn out to be more dangerous than they ever could have imagined.

Told in a combination of flashbacks and present-day action, the story flows from the first page to the very last. Imagery is vivid and characters feel real. While having super-powered people, the story never really feels like a typical comic book. While having zombies, it never feels like a typical horror book. Instead, it's a gripping piece of fiction that grabs on and doesn't let go.

Pen Name
4.0 out of 5 stars Great - Zombies and Superheroes - a genre cross that appeals!
Reviewed in the United Kingdom on January 23, 2014
Verified Purchase
Zombies have been prolific in the media for a while and to be honest I have gotten a bit sick of them. End of the world/zombie outbreak seen it, read it, played games of it.

So when I was looking to read a new book having just read "Blackjack Villain" which is a great superhuman style novel, I looked at EX Heroes.

I was skeptical, being so sick of zombies, but was pleasantly surprised by the book and found I couldn't put it down after a while.

The characters are great, obviously taking pages from famous superheroes, but the author knows this and plays it to his strength, making many popular culture references that we as readers know of. So I found myself smiling on these occasions. Perhaps a bit more fleshing out needed in terms of reasoning for their thoughts and feelings...but that will likely come with later novels...

Found the plot gripping and wanted to know more about what drives the characters. So all in all I would say very well written and successful!

Hope to enjoy the rest of the series as much!
Read more
3 people found this helpful
Report abuse

Amazon Customer
5.0 out of 5 stars Superheroes vs zombies
Reviewed in the United Kingdom on April 10, 2014
Verified Purchase
it used to be said you can find anything on the internet.
I submit that you can now find anything on Amazon.

A friend recommended this for nearly a year as I blithely ignored his pleas to read it.
Eventually I read it out of poiteness , and immediatly bought the rest. This sounds silly. Its Superheroes vs zombies.
The superheoes came first then the zombies. and some zombies are zombie superheroes.
Its all very well brought togehter - theres no haphazard weldign of genres here - its a coherent excellent storyline bringing togther one of the best written zombie and superheroe stories together.

If you could only read one superhero or one zombie story ever again - you better make it this one.
Read more
Report abuse

Richard Wright
3.0 out of 5 stars Inessential Fun
Reviewed in the United Kingdom on July 15, 2012
Verified Purchase
I like stories with super heroes in them. I like stories with zombies in them. It goes to follow then, that I liked Ex-Heroes, with its curious blending of the two. I didn't love it though. The plot is a retread of the familiar 'base under siege' played out in countless other stories. The characters, while well delivered, aren't consistently well conceived, and I'm not convinced they would hold interest outside of this particular mash-up. It's a fun book, but I'm not rushing to pick up the sequel.
Read more
Report abuse

Mark H. Bradfield
5.0 out of 5 stars I Love it.
Reviewed in the United Kingdom on August 3, 2012
Verified Purchase
Two of my favourite genres thoroughly and expertly blended together to give a very entertaining view of this alternative world where superheroes give a hand with the zombie menace.

It's not at all heavy and the emphasis is on the heroes but then in a world where they exist why wouldn't it be.

I have read other forays into the zombie survivor scenario - Adrians Undead Diary etc - and enjoyed the 'one man can make a difference' attitude but this gives us the opportunity to see what difference superheroes would make.

andrew from llangollen
5.0 out of 5 stars cross genre goodness
Reviewed in the United Kingdom on April 7, 2011
Verified Purchase
in a market overflowing with zombie novels, its not easy for authors to come up with a different approach without it seeming as if they are trying too hard. thankfully, this novel hits all the right spots. who would have thought that zombies and superheroes went so well together. its nice to see that even superheroes can,t protect us if the zombie apocalypse ever happens. well done to the author for coming up with a refreshing new idea. now then mr author, what about a sequel?
Read more
Report abuse
See all reviews
Back to top
Get to Know Us
Make Money with Us
Amazon Payment Products
Let Us Help You
EnglishChoose a language for shopping. United StatesChoose a country/region for shopping.
© 1996-2021, Amazon.com, Inc. or its affiliates