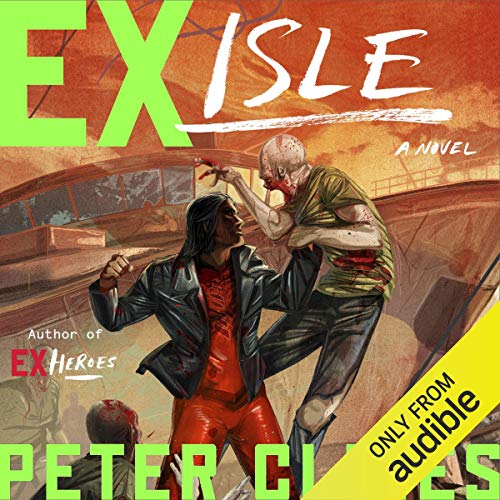 4.5 out of 5 stars
4.5 out of 5
294 global ratings
How are ratings calculated?
To calculate the overall star rating and percentage breakdown by star, we don’t use a simple average. Instead, our system considers things like how recent a review is and if the reviewer bought the item on Amazon. It also analyzes reviews to verify trustworthiness.

Tom Hallman
3.0 out of 5 stars A good fifth book in the series. Not great. Not bad. Good.
Reviewed in the United States on February 16, 2016
Verified Purchase
As a huge fan of the Ex-Heroes series, I pre-ordered this book the day it was announced with eager expectation. I even purchased an additional copy for a friend who is also an equally big fan of St. George and friends. When it arrived, I devoured it as quickly as I could, as did my friend. The result? We concluded that it was... good. And good isn't bad. But compared to the other four books in the series, which we would both rate as thoroughly excellent, this one was... good.

For you Star Trek geeks out there, reading this book is kinda like watching most of the Next Gen movies. They weren't bad. They'd actually have been perfectly legitimate episodes. But they weren't great *movies*. Most of what happens is fairly predictable. In the end you're glad you watched, but you're thinking less "opening night" and more "RedBox" in terms of time and money investment.

In Ex-Heroes, you're constantly in awe of the amazing characters (and backstories) and their epic battle with PZ aka Legion (oh, and there's *zombies*! Cool!) Then comes Ex-Patriots with a bunch of new exciting characters along with a new nemesis, Agent Smith, whose power leaves you with that Sixth Sense feeling of awesome. That's followed up with Ex-Communication where our heroes (including a dead one) go toe-to-toe with Legion again, but with the additional character of Cairax Murrain that leaves the audience on the edge of its seat in anticipation. The final battle in this book alone would make it worthwhile for Hollywood to produce all three movies. Without doubt. Then, in Ex-Purgatory, Clines takes the whole story and turns it upside-down and inside-out. During most of the book you're left wondering what on earth is going on - almost to the point of wondering if the author has lost his way - and then your mind is blown by the final reveal. Absolutely brilliant!

How does Clines follow up on all that in Ex-Isle? With an entertaining narrative about some of our strongest heroes fighting against... a somewhat strong but otherwise not-very-intimidating bad guy. It's like someone took The Governor from The Walking Dead and made him about as threatening as the whip-wielding nemesis from Iron Man 2. Oh, and throw in some Waterworld stuff too, as Clines unashamedly did. There was witty dialog, a believable-for-that-world plot (though seriously, Stealth? You thought sending Corpse Girl along was a good idea??), clever restraints on our heroes' abilities and some fun (and disturbing) "THEN" throwbacks, but taken as a whole, when this book was over, I realized that I couldn't recommend this book with half the enthusiasm as the other four. I might still suggest people read it if they're craving more interactions with St. George, Zzzap, Corpse Girl and the rest, but I'd temper their expectations that this is just an episode, not a movie. Redbox rather than opening night.

Now let's be fair. Clines still hit a home run 4 out of 5 times with this series, and I'll still buy whatever comes next in this series or his 14/Fold world. But I'll be slower to pre-order next time. Make me a believer again, Peter!
Read more
13 people found this helpful
Helpful
Report abuse

Mike watkins Jr.
3.0 out of 5 stars This was a decent read...nothing more
Reviewed in the United States on June 22, 2020
Verified Purchase
You know that one movie in a movie series....or one season in a Netflix series that is just not as good as the others?

And that's the issue with this book the characters aren't as interesting as the characters at the mount and on top of that, the bad guy is perhaps the most boring of them all so far.

His abilities are not as interesting as the previous guys...and his backstory well it's like he doesn't really have one or something. So it's hard to be invested in a villain you don't know anything about...let alone one that is kinda strong but not really.

I also, wasn't into this whole focus on Daniel thing...cause I mean outside of the suit (Cerebus) she's just not that interesting of a character compared to the others. So focusing on her for a good portion of the book wasn't a great idea in my opinion. Not to mention I kind of wonder why Bee isn't talked about anymore...wasn't she a part of the inner crew? what happened to her?

David McCune
3.0 out of 5 stars If Clines is building up to something he is planning to say with this series, now would be a good time
Reviewed in the United States on October 5, 2016
Verified Purchase
As with most any reviewer of a 5th book in a series, I enjoyed the first 4. From the fun and novel mash-up premise of the first book to the steady world-building and plot twists of Peter Clines' 2nd and 3rd ExHeros books, I was all in. The 4th went down a seemingly different path, but by the time it circled back to the narrative arc, the characters and their world had developed even greater depth.

And then there was book 5.

It is not bad on its own, but it clearly suffers in comparison to its siblings. While it entertains (well, at least in the final third) it is just not building on what came before in any meaningful way. I found myself checking on how much of the book was left, wondering if there were enough pages left with which to carry out the big reveal and twist that Clines' earlier work had led me to expect. Without giving anything away, I'll just give my opinion that book 5 did not measure up. (You do gets lots of Corpse Girl. If you are a fan of her, there's that.)

So, if Clines is building to a conclusion in the ExHeroes universe, and this is just a metaphorical catching of the breath before a big finish, all is forgiven. I'm in to the end. If, on the other hand, this is just a universe Clines plans to revisit repeatedly without progressing to a destination, then I don't think I'll be back. The novelty of the premise is no longer sufficient.
Read more
One person found this helpful
Helpful
Report abuse
See all reviews

squidbeak
3.0 out of 5 stars By Peter Clines normal standards this is rubbish
Reviewed in the United Kingdom on February 10, 2020
Verified Purchase
I've loved every book of Peter Clines' I've read, until now.. Big clue is at the end of the book where there's an explanation for why the book is like it is. Its an apology without saying so as the 2 main storylines are both thin and poorly executed and totally unconnected. Let's hope the next 'Ex' book is a return to form. Read it if you like this series but be warned its a bit of a disappointment
Read more
Report abuse

Kenn Smith
5.0 out of 5 stars Ex-cellent! (lame title i know)
Reviewed in the United Kingdom on February 17, 2016
Verified Purchase
Love this series, picked it up by accident as book 1 and 2 were in a triple pack with a book i wanted. Since i started reading the first book, i have loved this series, cant big it up enough.

The writing style is similar to Matthew Reilly (Scarecrow series) in that it reads like a movie and is easy to picture in your head. Peters history of working as a prop manager and writing articles on the movie industry have given him a fantastic insight and he uses it to fantastic effect.

Buy the whole series and work your way up to this one, only 230 pages in to it so far and haven't been disappointed.
Read more
3 people found this helpful
Report abuse

Tony
4.0 out of 5 stars Hasn't lost any punch
Reviewed in the United Kingdom on October 13, 2016
Verified Purchase
If you're already a fan of the Ex-Heroes you won't be disappointed. If you aren't then you're on the wrong page as you still need to read three other books before coming here!
Unlike certain other book series, the Ex's haven't lost any of their polish or substance. This book follows on perfectly from the previous three. Bring on book five!
Why four star? At time of purchase, it's simply too expensive for a small paperback book. Twice the price of the equivalent Pratchett. I want a hardback at this money. That is adequately explained in the original listing but it was the only way I could get this fourth book in the series.
Read more
Report abuse

Lee
5.0 out of 5 stars Another fantastic Ex novel
Reviewed in the United Kingdom on February 8, 2016
Verified Purchase
Another fantastic Ex novel, book 5 in the series and I cannot recommend them enough. They have been described as The Walking Dead meets the Avengers but they are so much better than that.
Start off with Ex-Heroes and work your way up from there, you won't be disappointed
Read more
4 people found this helpful
Report abuse

Simon Taylor
5.0 out of 5 stars Amazing!
Reviewed in the United Kingdom on May 12, 2019
Verified Purchase
The ex-isle book was absolutely amazing, a great edition to the ex-heroes series
Read more
Report abuse
See all reviews
Back to top
Get to Know Us
Make Money with Us
Amazon Payment Products
Let Us Help You
EnglishChoose a language for shopping. United StatesChoose a country/region for shopping.
© 1996-2021, Amazon.com, Inc. or its affiliates