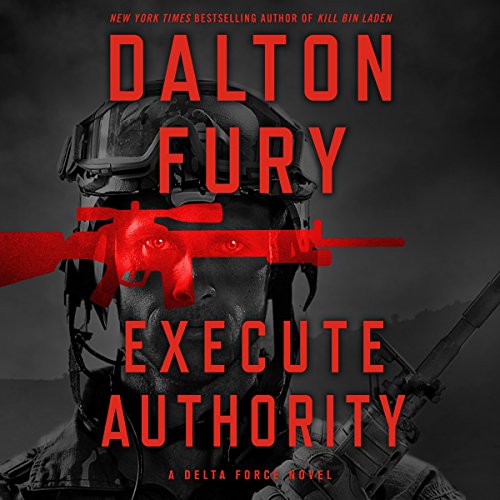 The explosive conclusion to the New York Times best-selling series.

In Dalton Fury's Execute Authority, Kolt "Racer" Raynor and his Delta Force squadron are in Greece, providing VIP security for the newly elected - and deeply controversial - American president on his desperate mission to hold the NATO alliance together.

Then, the unimaginable happens. Just as the president is arriving, an assassin's bullet takes the life of the Greek prime minister. The president is safe, but Raynor recognizes the killer - Rasim Miric - by his grisly signature: a bullet through his target's left eye.

The hunt for the assassin ends when Miric, to all appearances, blows himself up in an explosion that levels an apartment block, but Raynor refuses to accept that the sniper is really dead. Miric's grudge is with America, and one American in particular - the Delta Force operator who cost him an eye, Kolt Raynor. Raynor believes that Miric's killing spree is only just beginning, and his suspicions are proved true when Miric is photographed crossing the border into the United States.

Forbidden by law from operating on American soil, Raynor will have to bend the rules until they break, risking everything in order to run the assassin down before he can strike again.

But what Raynor doesn't realize is that Rasim Miric is also hunting him.

Your audiobook is waiting!
Learn more about Membership
List Price: $31.49
You Save: $3.94 (13%)
By completing your purchase, you agree to Audible’s Conditions Of Use
Sold and delivered by Audible, an Amazon company

Air Force Veteran
5.0 out of 5 stars Very solid, thought-provoking read.
Reviewed in the United States on July 16, 2018
Verified Purchase
Just finished this great read last night. I feel as if Dalton Fury left the end hanging purposefully so that a ghost writer could step in to write another fabulous book. This is what happened with Tom Clancy after he passed away. But I was truly saddened, both with Dalton passing away and knowing there would be no further novels. As an optimist, anything is possible. If someone knows anything, I'd love to hear about it. All of Fury's books were high octane reading. Precluding certain details due to the "need to know" cliche, Fury was still able to put the storyline in perspective for continuity and substance. I know he had no trouble getting my attention whilst reading his books. IMHO the questions I asked myself regarding the situations that came up in his books made me believe that, yes, anything is possible, but of which we will never know about. All very plausible. I truly hope that someone will come along and pick up where Fury left off.
Read more
3 people found this helpful
Helpful
Report abuse

SteVen Hendricks
4.0 out of 5 stars ...action thriller that tracks with real world events and confrontations.
Reviewed in the United States on March 7, 2021
Verified Purchase
Book Review - An outstanding book by an outstanding author that is no longer with us. I already miss his writing. Another great read by Dalton Fury. As usual, the storyline tracks with real world events and confrontations, and the ending does not disappoint. Dalton Fury was formerly with the most elite military unit in the US Army - Delta Force. His knowledge of the "trade craft" is excellent, and is clearly on display in this novel as it is in his other books. You really get the sense of reality in all the confrontational scenes within his novels. Dalton Fury has since passed away, and we not only lost a great writer, but a true American hero that served our country with great honor and valor during his time in the military and afterwards. Godspeed Ranger Tom Geer...
Read more
Helpful
Report abuse

What I wanted to spend my review airtime on was the author. That guy... that guy finished this book with Stage 4 pancreatic cancer. Without a doubt a tougher SOB than his protagonist. Thank you, sir, for your literary efforts and may you rest peacefully. Godspeed from Bellville, TX
Read more
11 people found this helpful
Helpful
Report abuse

MR
5.0 out of 5 stars Best of series
Reviewed in the United States on December 21, 2017
Verified Purchase
This is much better written than earlier books in series which had accuracy and constantcy issues. For example first book had an aircraft take down, sometimes described as a 767, other times stated to be a 747. The nuclear power plant book also contained a number of errors on reactor design and operations, including calling fuel fusion rods. This book, sadly the last, was tightly wtitten with none of the plot jumps in earlier books. A very strong ending for the series from an author who deserves great respect for his military service.
Read more
3 people found this helpful
Helpful
Report abuse

YukonJack
5.0 out of 5 stars ⭐️⭐️🇺🇸 OUTSTANDING CONCLUSION 🇺🇸⭐️⭐️
Reviewed in the United States on May 22, 2022
Verified Purchase
This was an outstanding conclusion to the Kolt Raynor, aka: Racer. With the passing of the author it appears that this will be the final installment. It did not disappoint! Do yourself a HUGE favor read this book, BETTER YET, read the entire series!
Read more
Helpful
Report abuse

Anna Priscilla
5.0 out of 5 stars Excellent and Chilling
Reviewed in the United States on June 20, 2022
Verified Purchase
Thank you, Dalton Fury, for your service to your country, in action and in your literary works......warnings to thinkets of democracy. You are greatly missed.
Read more
Helpful
Report abuse

Arcane Thought
5.0 out of 5 stars Ripped from tomorrows headlines.
Reviewed in the United States on November 23, 2018
Verified Purchase
This was the best book in the Colt Raynor series. I am sad that it will be the last. Dalton Fury will be missed. His insider knowledge and voice from the other side of the wire really can't be duplicated. This book proves it.

Kindle Customer
5.0 out of 5 stars One last Gift from Dalton Fury
Reviewed in the United States on September 7, 2017
Verified Purchase
For the final time, this is Dalton Fury at his best
with heart-stopping action and an ingeniously
imagined plot. His book "All Lines Black" is the
prequel to "Execute Authority" and is a great
intro to his last work.
Rest in peace, Ranger Greer
and thank you for your service.
Read more
2 people found this helpful
Helpful
Report abuse
See all reviews

carol
5.0 out of 5 stars Great read
Reviewed in Canada on September 15, 2017
Verified Purchase
Excellent waiting for more information on next adventure in new book for this Delta hero I have enjoyed every book he has written
Read more
Report abuse

Lee B.
5.0 out of 5 stars Five Stars
Reviewed in Canada on July 7, 2018
Verified Purchase
Such a good author. Sad to read of his passing. Along with Vince Flynn hate losing such good authors.
Read more
Report abuse