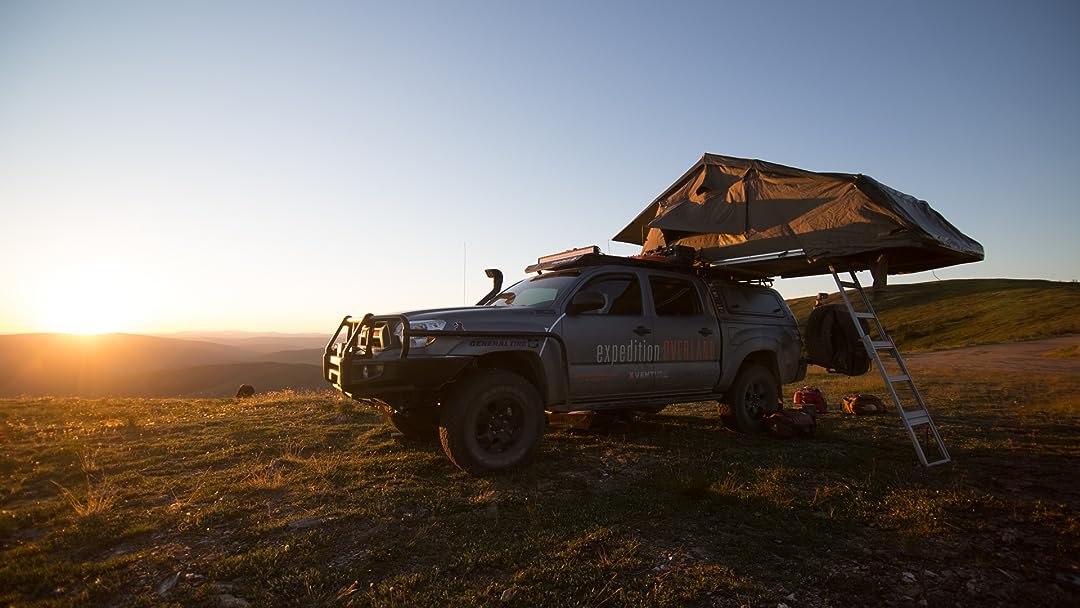 (246)
2014TV-PG
We are the team of Expedition Overland. A team of ordinary people, doing extraordinary things. We invite you to join us on our adventures, take notes from our mishaps, and laugh at our expense. But above all, we hope that you are inspired to explore your world, wherever that may be. Join us as we set out to explore the last frontier of Alaska and the Yukon with our sights set on Prudhoe Bay.

Kindle CustomerReviewed in the United States on March 16, 2020
5.0 out of 5 stars
A great way to motivate you to get outdoors
I honestly do not know where some of the 1 Star reviews are coming from.. jealousy is the only thing I can think of. I am a retired Marine Colonel and have been deployed several times.. calling these guys weak, wussies, millennials, is absolutely ridiculous.. Well they are probably millenials, but if the generation has more young men and women like this I am reassured. This is overlanding, if you don't think it is, you are behind the times. Great adventures, great camaraderie, some knowledge passed along.. everything I could ask for in a series like this. I highly recommend these series for your next binge watching weekend.
45 people found this helpful

JohnReviewed in the United States on January 3, 2020
1.0 out of 5 stars
Overland really? I do more Overland in my well waxed "mallcrawler" J/K!
Leave it to millennial's to reinvent "Overland" to fit their wussy ways. This show is just advertisement for crap General Tires that go no where offroad and is a test to the 'spirite' of 20-30 something idiots that can't even navigate on light trails or have the common sense to notice wheel wobble when a rig only has 2 lugnuts holding a wheel on?Really ? I liked the first few episodes,but the stupidity of these individuals with their flare of over dramatics makes this a 1 star everyone wins and gets a ribbon for participation because we are being paid to flaunt crappy tires and poor vehicle setups for cash and youtube -like fame is so drab.I'm glad this was free on Prime because it's bathroom bowel movement only fluff of a show.
42 people found this helpful

Diane Sowinski Reviewed in the United States on February 17, 2020
5.0 out of 5 stars
Now wait a minute...
Now, wait a minute...
*I don't usually do this but I feel compelled to submit the following review because I really, really liked these documentaries and I wish that these people would do more. Did I watch every moment with the same level of interest? No, I did not however, I did not expect to. Did they show how they outfitted and modified their vehicles, camping, and other equipment? Absolutely, but it's not surprising that a venture of this magnitude would need sponsors who would then expect such mention/exposure.
*These guys are not professionals so I did not expect the type of documentary you would see from one filmed by professionals. Although I would have liked it if they could have had it professionally filmed, I would think that that would have prevented their ability to travel into the areas that they did.
*How many of us get together as a group, to set goals of this magnitude and then overcome all of the challenges and obstacles presented to its end? This is a tremendous achievement. I enjoyed the interpersonal relationships they shared on camera as well as the mountains, rivers, tropical forests., beaches, and villages, etc. that they filmed along the way; as well as the interactions they had with the people they met. I sometimes watched in wonderment as they reached their final destinations.

Amazon CustomerReviewed in the United States on September 24, 2019
5.0 out of 5 stars
A travel documentary of the Pan-American Highway with an incredible cast and crew!
Such an incredible show, created by incredible people! This is not just an off-roading or overlanding show, this is a story of an awesome crew traveling in a unique way to beautiful places. You can see the care and effort put in to each gorgeous shot from beginning to end! Loved it and can't wait to watch again!
31 people found this helpful

Yo Joe!Reviewed in the United States on September 26, 2019
5.0 out of 5 stars
Enjoy the scenery and wanderlust for Overlanding
Watching this series is what I remember from watching some of the early National Geographic VHS tapes I watched when I was younger, where explorers made their way into the unknown and to meet adventure. The purpose of these early explorers was to learn, grow, and enjoy the great wonders hidden in plain sight. I believe that the Expedition Overland crew does the same, and it makes me yearn for the ability to do the same. Sadly, I must sit and live vicariously through them. So, thank you for the great sights and wonderful times.
33 people found this helpful

MT_DebReviewed in the United States on November 8, 2019
1.0 out of 5 stars
sheesh .. scam movie... a paid vacation
Expedition? I think not. Sponsored vacation is what this is .. where do I sign up !! BORING
33 people found this helpful

Thomas W. WissmannReviewed in the United States on September 26, 2019
5.0 out of 5 stars
Going to watch all episodes a second time!!
Have already watched all of these episodes on YouTube and now I’m ready to watch them all over again! I never get tired of the amazing places and cinematography. They have inspired me and a group of friends to do the same thing. One day we will hopefully travel from Alaska to Chile!!
25 people found this helpful

Robb_DReviewed in the United States on September 26, 2019
5.0 out of 5 stars
What a Wonderful World
Cinematography is fantastic of epic scenery, and different worlds. You realize that you’re on a planet with so much to see and you can get to a bunch of it by using a car and going. This show is also educational in that there are spots to learn about using your equipment, but it’s not gear centric in that you don’t need all the gear to just get out there. Epic show, epic people, epic stories, EPIC PLANET!
22 people found this helpful
See all reviews
Back to top
Get to Know Us
Make Money with Us
Amazon Payment Products
Let Us Help You
EnglishChoose a language for shopping. United StatesChoose a country/region for shopping.
© 1996-2022, Amazon.com, Inc. or its affiliates