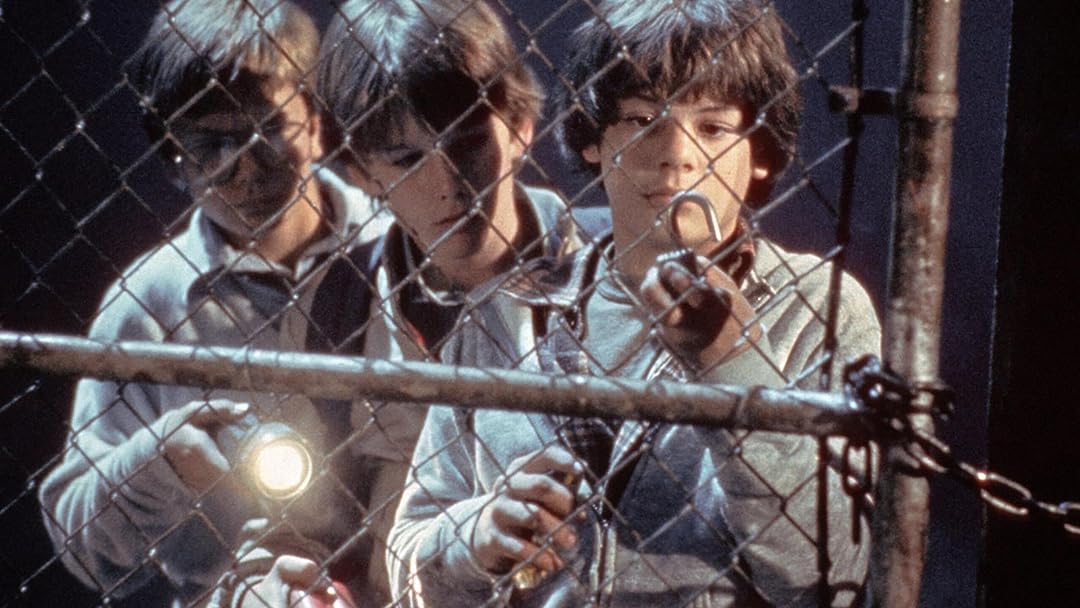 nelsonReviewed in the United States on May 28, 2021
2.0 out of 5 stars
Problems with this Shout Factory transfer
Verified purchase
A five-star film but, beware the "geometry" issues associated with this Shout Factory release. Besides each version (theatrical, home video) suffering from a substandard transfer -- albeit a very marginal improvement over the DVD -- the picture on both BD's is slightly but noticeably (at least to some) 'squeezed' top and bottom, elongating and stretching the film's appearance side to side. SF says they have no intention (presently) of performing a fix. Decide what you'll consider tolerable before buying.
11 people found this helpful

THXkidReviewed in the United States on May 26, 2021
4.0 out of 5 stars
The newest re-master by shout, great movie "Explorers" a Classic 80's movie!!
Verified purchase
Now I know I gave it 4 stars, but 1st let me explain. 1st this is one great movie, great for young and old, the whole entire family. The re-master of the video is good, not great, lots of grain, but I put that to the bad film stock they used to originally shoot the movie. The Audio track is 1st rate, the 5.1 DTS master uncompressed Audio, sounds superb on my THX certified sound system. Even great low end bass for this older movie, before digital sound had been released on movies. The extras are good and fun, but NOT complete. The aspect ratio is correct. Great they give you 2 complete discs with original theater and I suppose the later, video/TV release. When I had it on laser disc and betamax, it was the longer theater version, not the shorter version I have seen on "Amazon prime". Now why the 4 stars. 1st I think Shout could have cleaned up the film a bit more, I saw a few flaws now and then, yes being picky. 2nd, where is all the extra's on how ILM did all the special effects, full size tilt a whirl, come on... we all want to see how they did that. The flying sequence, the models, this was done way before CGI space special effects. These were mostly practical, and I loved how star wars did their practical effects, let's see some of that here please. In all.... way worth the money to buy and add to my other collections of other re-masters like Last starfighter and buckaroo bonzai.
8 people found this helpful

Todds BooksReviewed in the United States on September 2, 2018
3.0 out of 5 stars
Great beginning - pittiful ending
Verified purchase
This movie has a great first two acts, and then the very talented cast are let down by cheesy cartoon-like aliens in rubber suits. This movie had the potential to be a real block-buster and blew it all in the third act.
31 people found this helpful

A. GoldenReviewed in the United States on April 27, 2021
2.0 out of 5 stars
Could have been a good movie
Verified purchase
Everything up to the ship is wonderful. The first two-thirds of the movie is whimsical and fun. The end is awful. There is nothing exciting that happens and there is no climax, just some awful creatures singing and saying quotes from movies. I almost turned it off at that point but forced myself through another 20 minutes. Then the whole thing just ends abruptly! Very disappointing.
11 people found this helpful

Mike M.Reviewed in the United States on May 31, 2021
3.0 out of 5 stars
SQUISHED VIDEO - The sphere is an oval now
Verified purchase
The movie is squished, so the sphere is no longer a circle but an oval! What happened, I assume they squeezed it into the wrong aspect ratio. The film itself is brilliant at five stars all the way, the new Blu-ray disc it’s so sad because their heads are squished the spirit squished everything is squished. I’m pretty sure this happens with back to the future and back to the future they sent out fixed discs. Shout Factory! Fix it before you make more, then send out revised discs for those that ask. I’m gonna have to digitize do it myself I imagine.
9 people found this helpful

Ruben ReyesReviewed in the United States on November 12, 2020
5.0 out of 5 stars
Ahead of its Time
Verified purchase
God I miss the 80's. However I think this deserves a sequel or reboot. It does get goofy toward the end, and I hated that aspect watching it in my teens, but now, over 30 years later it I can see clearer what the writer was trying to convey. It's a great premise that deserves a second shot. Seth McFarland should write it!
11 people found this helpful

J. WestReviewed in the United States on August 17, 2019
5.0 out of 5 stars
The Greatest Childhood Sci-Fi Film Ever...To Dream
Verified purchase
One of my favorite childhood sci-fi film. I didn't know that those two boys were Ethan Hawke and River Phoenix. Of course Dick Miller (R.I.P.). What a childhood dream to be flying in the air and go to space. I dreamed of that when I was a lot younger. A great story to tell a child to dream anything you want and go for it. The effects were cool but it was too silly. But of course the aliens wanted fun and have a good time. I guess that's why they never wanted to go to earth. Great film to always remember childhood dreams.
12 people found this helpful

Mike S.Reviewed in the United States on March 3, 2022
5.0 out of 5 stars
A fun 80s movie
Verified purchase
Explorers was a mid-1980s movie starring a very young Ethan Hawke (in his first movie role) and a very young River Phoenix (both were around 13 years old at the time the movie was shot). The premise of the movie is that Hawke's character, Ben, who is huge into space, aliens, and science fiction, dreams of what is essentially a circuit that can create a force sphere that can allow for space flight. Phoenix plays Wolfgang, a science nerd who builds the circuit, and Jason Presson plays Darren, a kid that is kind of a loner but gets caught up in the experiment and helps to build a ship. Of course, they end up going into space and meeting actual aliens, but there is a bit of a twist to that part of the story.

The supporting cast is made up of many recognizable actors including Meshach Taylor, Dick Miller, James Cromwell, and Amanda Peterson, who was another recognizable child actor for those of us who grew up in the 1980s. Robert Picardo played several roles in the movie. He is, of course, probably best known for his role on Star Trek Voyager, but he is almost unrecognizable in each of the roles, including that of the "main" alien.

For those who get the Blu-Ray, there are two discs, one with the theatrical version of the movie and one with the home video version of the movie. Surprisingly, the theatrical version is a few minutes longer than the home video release. Each disc has the same bonus features, the main ones being an hour-long making-of feature, deleted scenes (that can be played with or without commentary by the director) interviews with a couple different crew members, and the theatrical trailer. A good amount of material for those who like watching the extras.

Overall, the movie, while certainly dated, is still very enjoyable. It has a pretty timeless theme that helps distract from the fact that it feels like a mid-80s movie. Interestingly, if you watch the making-of feature you will find out that the movie was really incomplete, but had to be finished to meet the summer release deadline. So elements had to be taken out, and the edit that was released to theaters was not what the director, Joe Dante, wanted to release. Even so, the movie was pretty well written and well-acted, even though the main actors were kids, and still very green. For many people, this is probably more of a nostalgia movie they remember from their childhood, but if you have not seen it, it is definitely worth checking out.