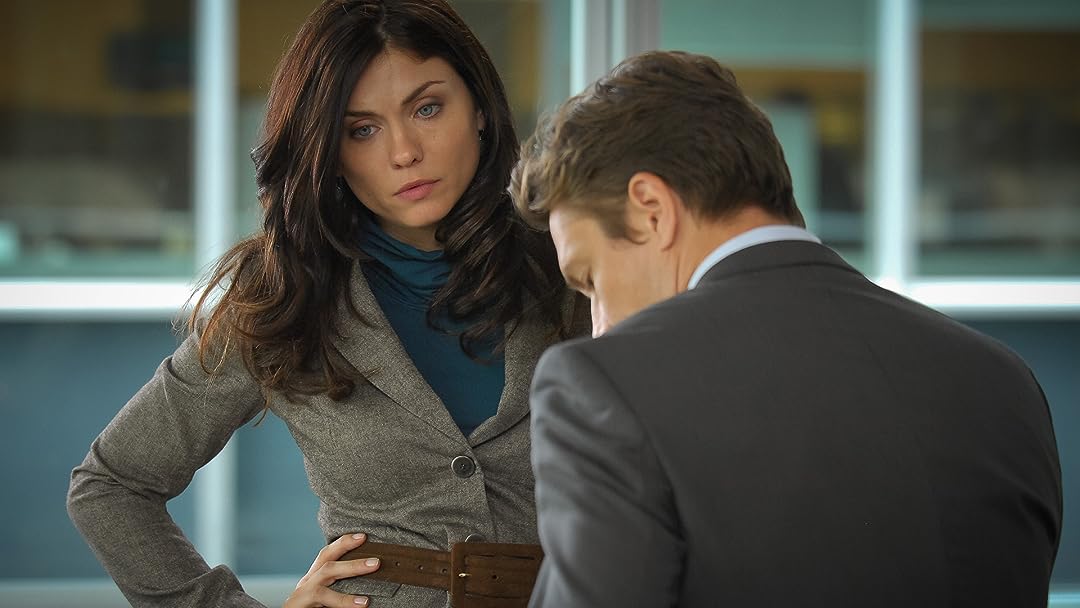 (35)
5.01 h 29 min201218+
A young teacher, Emily Bennett, sets out to clear her name after digitally fabricated pornographic photos of her are sent to her students. She soon discovers that this incident is linked to the kidnapping of another young woman and that she is now the kidnapper's next target.

Geoffrey F. ArnoldReviewed in the United States on July 11, 2021
1.0 out of 5 stars
Premise good, execution bad.
Verified purchase
Well, what can we say, except that this had a good idea and then they tried to be too clever and added twists and turns and red herrings and a whole salad of things that didn't make sense in how this was supposed to play out.

So, when the final reel kicks in, suddenly we find out it isn't who they kept pointing to, but someone entirely new, that we were given all but zero clues about previous to the "reveal". Ugh. If you're going to spring a new suspect upon us, who is actually the guy, you have to give us something about him beforehand. We saw him enough...but then got no real clues given at all, nothing. This is just lazy.

I'm reminded of the film "Murder By Death", in which the host of the 'party' complains about this kind of stuff, that new information is suddenly introduced with no prior allusion or inference to it throughout the story; it's just dropped in our lap. It's infuriating.

And that describes how we feel about this film, infuriated that it went from promising to utterly disappointing so quickly by trying to be too clever for its own good.

The people who made this film have no understanding of how this kind of story has to play out. They have numerous examples to reference...and yet they blew it by doing the unforgiveable.

Just move on and don't bother.

Bob G.Reviewed in the United States on July 17, 2017
3.0 out of 5 stars
Dysinformation Terrorism
Verified purchase
terror film based on the use of mah durn take no logic tools for felony identity theft purposes. "Live.cam" of course based on Emily's failure to delete or disable the criminal purpose webcam on her own computer, compounded by infliction of numerous video bugging devices throughout her home. While the criminal intrusion shown in the film was severe, so too is the felony distribution of confidential personal information on the "Facebook" web site of passwords used to access virtually every financial account in America over the expressed objections of the victims of those violations of the Identity Theft and Assumption Deterrence Act about which, unfortunately, the Federal Trade commission has been denied any enforcement capabilities. For that matter so too is the felony identity theft purpose *copying* of identity papers "by order of the Las Vegas Police Department" to be used by the national crime gang provided with control positions in all Lost Wages casinos and every other lodging provider in that area. So too are the activities of the Nutty Own All inSecurity Agency taking absolute control of all of the illegally seized personal property in the form of stocks, bonds, and cash balances "held" on "computers" of the fraud and theft industry in violation of Article IV of the US Constitution Amendments. The notion "I should have trusted you anyway" is majorly refuted by the 57% divorce racketeering rate engineered by the felony tax evading slave mongering "religion" gangs financed by the criminaly corrupt goofermint. While the movie pretends to a "personal" perpetrator, the reality of felony identity theft in the former United States is virtually entirely a feloniously corrupt goofermint activity. That the film attempts to distract from the reality of criminal gang perpetrators, in the same manner that the Freaky Burro of Instigation pretends crime is exclusively an "individual" activity, reduced the potential rating on this quality acted,photographed and produced film to at most three stars.

Lisa MillwoodReviewed in the United States on August 10, 2017
1.0 out of 5 stars
Not worth your time. Not scarey. Not suspenseful, Not well written.
Verified purchase
I am shocked when I read that someone described this film as "terror based"???? WTF. This was a weak story. It made no sense really. The script was not well developed and seemed like the writer just threw in things to try to mislead the audience but what was thrown in made no sense or was not explained (ie that both guys had worked at a company that the other victim had worked at). This was thrown out there with no explanation or follow up to explain its relevance.

This movie was terrible and WAS NOT scarey or "terror based"?????
One person found this helpful

nauaoqtpiReviewed in the United States on February 25, 2022
1.0 out of 5 stars
Don't waste your time
Verified purchase
Unless you LOVE terribly corny Lifetime movies, take a pass. Terrible script, terrible overacting. I pegged the kidnapper from his first scene only because he's the only one that wasn't suspicious. So dumb.

Catherine ChengReviewed in the United States on June 14, 2017
3.0 out of 5 stars
How do you manage the public and private sides of your life? This could determine not only your tribe, but enemies too.
Verified purchase
I thought this film's premise of cyberstalking with a focus on online privacy would interest me. In this sense, I was right though other than that I wasn't. Why? The film's premise although interesting was not flushed out fully and lacked coherency in my opinion. In addition, I thought the acting by the cast was somewhere between forced and cheesy though this can be debated. You can definitely find a better film with a similar premise to watch though if you can't it wouldn't hurt you to watch this film at all.
One person found this helpful

Richard PoirierReviewed in the United States on February 1, 2017
3.0 out of 5 stars
A cyberstalker film which is average
Verified purchase
This was a TV movie I think which I wasn't aware of not that it makes much of a difference. The reason why I gave it three stars and not less is because of the subject matter which in today's age is still relevant. The story was a basic one about a cyberstalker making her life difficult. She loses her job and a business opportunity. The identity of the cyberstalker is was easy to figure out, but this movie was worth watching once. It's been done before, but it's not terrible or great.
One person found this helpful

Richard A. ColeReviewed in the United States on July 20, 2020
3.0 out of 5 stars
OK movie
Verified purchase
The movie was ok. Acting as decent and the actors were good. The story was a bit disjointed and a bit "busy" if that makes sense. So many twists and turns that were needless and wasted time. Figuring out who the bad guys were was easy, but won't spoil it for you.

M.ChristianReviewed in the United States on July 6, 2021
4.0 out of 5 stars
Worth watching
Verified purchase
Good movie
One person found this helpful
See all reviews
Back to top
Get to Know Us
Make Money with Us
Amazon Payment Products
Let Us Help You
EnglishChoose a language for shopping. United StatesChoose a country/region for shopping.
© 1996-2022, Amazon.com, Inc. or its affiliates