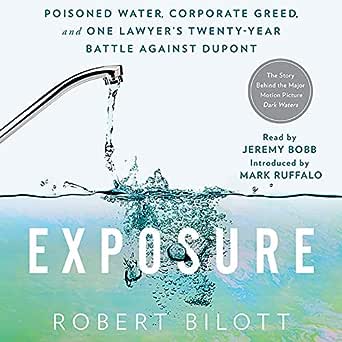 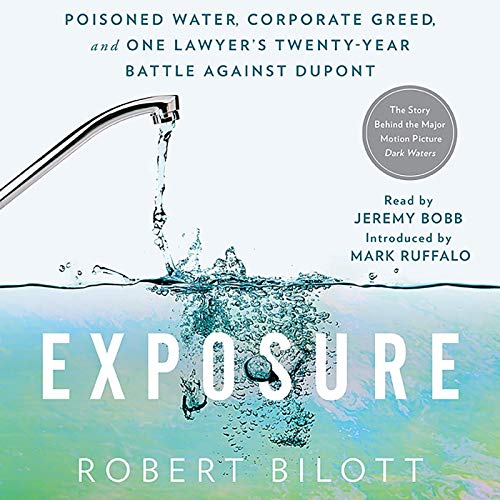 4.8 out of 5 stars
4.8 out of 5
117 customer ratings
How does Amazon calculate star ratings?
Amazon calculates a product’s star ratings based on a machine learned model instead of a raw data average. The model takes into account factors including the age of a rating, whether the ratings are from verified purchasers, and factors that establish reviewer trustworthiness.

Kindle Customergg
5.0 out of 5 stars Unbelievable...
Reviewed in the United States on October 11, 2019
Verified Purchase
It's unbelievable what DuPont did, all in the name of financial profit, by introducing this hazardous chemical concoction and then perpetuating its use when they knew full well how toxic it was. It is unbelievable and heartbreaking to hear about the suffering of humans and animals while DuPont raked in profits. It's unbelievable that Earl Tennant found just the right person in Robert Bilott to seek and attain justice...but he did. It's equally unbelievable that the EPA and our legislative bodies have done so little in this fight, while other countries have made giant strides. I had no idea of the scope of this issue...and I thank the author, not only for giving me the story to read, but for his patience and tireless efforts over so many years to expose this issue and cause lasting change. We need more people like that.
Read more
47 people found this helpful
Helpful
Comment Report abuse

avid reader
5.0 out of 5 stars Best book of 2019
Reviewed in the United States on October 20, 2019
Verified Purchase
I read it in 2 days. The book balances the intellectual rigors of the legal process with the personal and social aspects of the case behind it. As someone who lives in a community with PFAS contamination, I think every American should read this book and wonder what the factory down the street is discharging into their water.
Read more
33 people found this helpful
Helpful
Comment Report abuse

Vicki Quint
5.0 out of 5 stars If you drink water or are a firefighter, you should read this book.
Reviewed in the United States on November 15, 2019
Verified Purchase
Excellent read - pacing was gripping because I am familiar with the PFAS chemical compounds as they relate to firefighter exposures. Detailed, factual read. Buying more books for others and holiday gifts. Just enough legal and court action to keep it fascinating without getting bogged down. Highly recommended!
Read more

K
5.0 out of 5 stars Even Better than the Movie! (Dark Waters)
Reviewed in the United States on December 23, 2019
Verified Purchase
The audience at the Tower Theater applauded Bilott at the conclusion of Dark Waters, and I rushed home to buy this copy of his book Exposure. It's even better than the movie, and I'm filled with admiration for this man who chose the battle dragons, and the button-downed law firm that stood behind him as he did it.

Anyone who has ever been involved with a court case knows that it's the evidence admitted that determines outcomes. How Bilott managed to mire through hea hundred-thousand pages of more of documents thrown at him by DuPont to find the skeleton key to winning this case is a miracle in itself.

Here's to those who battle dragons and the senior partners at Taft that supported him when the outcome was as clear as a muddied lake.

Bilott is a corporate defence lawyer, but in this case, he became the small man’s plaintiff lawyer. He begins this book with the intriguing brief from a poor farmer, Earl Tennant, that came to him through his grandmother, Alma White. Farmer Earl’s cattle and even his family were all falling ill. He suspected – no, he strongly believed – that it was something that the big company DuPont pumped into the waters of Dry Run Creek nearby.

This book is the exciting account of how Bilott took on Earl Tennant’s case and fought a court action that resulted in a satisfactory settlement for Tennant. But that was only half the story because part of the settlement required a Science Panel to study the effect of the deadly agent, known by various names such as AFPO, PFOA, FC 143, and C8. It is the chemical used to make Teflon. The agreement saw further pay-outs should the Science Panel determine that C8 was the likely cause of any illness.

In the meantime, more cases sprung up from elsewhere, all with the same problems that Earl Tennant and the people of Parkersburg had with C8. A new action was commenced by Bilott on behalf of his new client, Joe Kiger. This time, Bilott, after studying Kiger’s story, commenced a class action. The fight with DuPont was far from over. It had gotten bigger. The book is also a legal thriller and should be read by law students and lawyers. Bilott found how difficult it was to fight a giant corporation like DuPont. His methods and perseverance form the fascinating aspects of the book.

Was Bilott a good lawyer, an altruistic man. Or a glory seeker? The reader can decide. In the meantime, like Erin Brockovich, Bilott’s book has been made into a movie – Dark Waters, starring Mark Ruffalo as Bob Bilott.

C. Harvey
5.0 out of 5 stars Wonderful Detail after Watching Dark Waters
Reviewed in the United States on December 18, 2019
Verified Purchase
I watched the movie on Saturday and on Sunday I sat down to read Exposure. I devoured the book in only two sittings, once again captivated by the story I had seen only the day before on the big screen. The book is split into three sections, the first two which were detailed in the film. Although the movie did a fine job of capturing the tale, the book provided additional insight into the very captivating and complex legal battle with DuPont .

Being somewhat aware of PFAS prior to reading the book, I was impressed to see a complicated scientific topic broken down (without dumbing it down). Bilott did a great job of capturing his learning curve as well, making it clear how much time he put into learning the material to represent the cases as eloquently and accurately as possible. But fear not, if science is not your interest the book covers the legal proceedings in wonderful detail.

I highly recommend this book and have purchased several copies for Christmas gifts!
Read more
4 people found this helpful
Helpful
Comment Report abuse
See all reviews from the United States