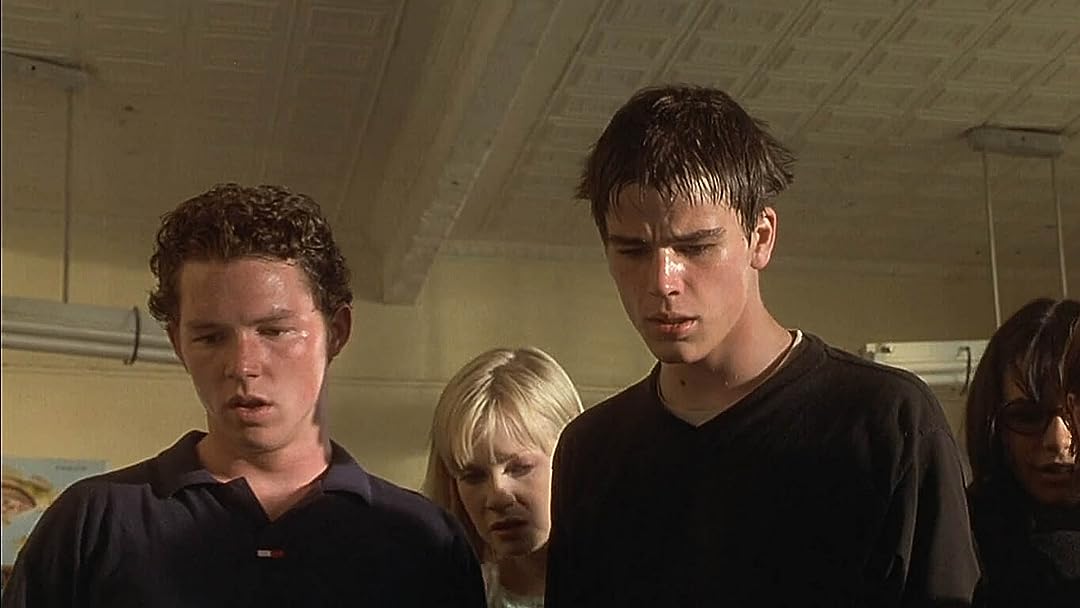 (3,487)
6.51 h 44 min2021X-RayR
A group of high school student begin to suspect that their teachers are actually alien invaders enslaving the student body.

Miss_NocturnaReviewed in the United States on March 21, 2018
5.0 out of 5 stars
And I love films that focus on High Schools
Verified purchase
When video rental stores and VHS tapes were still “in” (feeling nostalgic now) the lady that I used to rent VHS tapes from bought me a copy of The Faculty because I used to rent this movie every single weekend after school was out.

I was a big Elijah Wood fan back in the day which led me to discovering this movie in the first place. And I love films that focus on High Schools. This film has an enjoyable cast but the vulgarity level, at times, is unnecessary. Still, it does not impune on how good this movie is.

If you love aliens this is a great film!

johnfReviewed in the United States on September 28, 2016
5.0 out of 5 stars
Great cast makes this worth watching.
Verified purchase
Many people call The faculty a cross between The Invasion of the Body Snatchers and The Breakfast Club and they're right. Five of the six main characters exactly parallel the characters of the Hughes film and it is pretty close to a remake of Body Snatchers. Herrington High School in Ohio is a typical small town school of the late 90's with the usual mix of "in" and "out" students, a fairly loose drug culture and a hometown football team. Casey (Elijah Wood) is one of the "out" students, so out he's vulnerable to being bullied. His only salvation is being the photographer for the school paper. Things are already happening beneath the normal surface when he finds what looks to be a strange, worm-like creature on the football field where he eats lunch alone.

He shows it to his science class where the teacher, Mr.Furlong (played by Jon Stewart, a real surprise) puts it in water where it reactivates itself.This begins a series of events that lead to the six disparate students coming together to try to stop the alien enemy using the school as a staging ground for an invasion. It takes off from there and never loses its pace, quickly moving from one scenario to another. The balance between the horror and comedy elements is carefully sustained. Though generally called a horror or sci-fi comedy, the comedy is mostly in its satire and often light mood and not in actual attempts to be funny. The scary and serious elements predominate.

The best thing about the film is its cast. It is probably because director Robert Rodriguez had been making a name for himself with films like El Mariachi, Desperado and From Dusk Until Dawn. Of course many of the younger actors were just starting out. But practically every actor is perfect in their role. Imagine a school with Bebe Neuwirth as the Principal, Salma Hayek as the school nurse and Robert Patrick as the Coach. Piper Laurie makes a rare appearance as the school's drama teacher. The students include Elijah Wood as the geek, Josh Hartnett as the troublemaker, Shawn Hatosy as the earnest jock, Jordana Brewster as the pretty girl clea Duvall as the Goth girl and Laura Harris as a sweet and naive new student from the South.

Just sit back and enjoy this film. I was surprised by how good it was and watched it a second tie. It's almost perfect of its type but has (for me) a trick in the resolution that ties things up a little too neatly. It hurt the film a bit for me but didn't ruin it.

joel wingReviewed in the United States on December 14, 2020
2.0 out of 5 stars
Very mixed writing with horrible start then redeems itself but still flawed
Verified purchase
The Faculty was Robert Rodriguez’s fifth film. It starts off like a stereotypical high school story where you have the popular kids and the outcasts and really exaggerates those divisions. Then it turns into a horror story about the teachers.

The first thing that strikes you about the film is that it had a large ensemble cast with many of the actors going on to bigger and better things. For instance there’s Josh Hartnett, Clea DeVall, Elijah Wood, Famke Janssen, Jon Stewart and Salma Hayek plus Usher of all people.

The start of the movie does not give you confidence this will be any good because it gives such a formulaic portrayal of high school. Wood for example gets scissored on a pole by a bunch of jocks. Then it redeems itself with the teacher part of the story although there are still some big holes in the writing.

Overall that makes for a very mixed bag.
C
One person found this helpful

Allen Garfield's #1 fan.Reviewed in the United States on June 7, 2019
2.0 out of 5 stars
Better than Scream, I Know What You Did...
Verified purchase
...and certainly better than the sequels and knock-offs - not a ringing endorsement, but still. This was written by the guy responsible for the films in the headline. Thank god that three year period in the late 90s - the nudge nudge wink wink PG/PG-13 "horror" of that era went down in flames. People paying good money to see the cast of Friends - in the theater! The mind reels.

The Faculty - thanks to Robert Rodriguez - plays it straight. Some off-beat humor, good FX and a foxy, naked alien (think: Lifeforce) can sure salvage even the most pedestrian of disposable - and cynically conceived -cash-ins....

D. GoodwinReviewed in the United States on November 23, 2021
5.0 out of 5 stars
American Teenagers vs Body Snatchers
Verified purchase
I graduated high school the same year this movie was in theaters. My friends and I went out and saw it. I watched it again tonight and still found it just as fun by the end of the movie. Of course since I am older some of the beginning things were cringe worthy especially the shallow characters. Then again this is a teen action scifi not Shakespeare.

I still love Elijah Wood's acting as well as Josh Harnett and Jordana Brewster. I plan to get a DVD of this film soon so that I can watch it anytime I like.

Mike IReviewed in the United States on July 25, 2018
5.0 out of 5 stars
Great Quality Blu-Ray!
Verified purchase
I remember seeing this in the theater with friends on my 25th birthday, just a few days after it opened in 1998. It was a fun movie, and I haven't seen it in years. I used to have the DVD, but lost along the way at some point. Happy to add the Blu-Ray to my collection! The Blu-Ray transfer is very good! There was only one scene I recall seeing just a slight amount of grain. It looks so much better than the DVD ever did. The audio is great too! If you grew up in the era of teen/horror flicks before social media and phones took over the world as we knew it, then you will want to add this one to your collection! Well worth it for the great quality! The only downside is there are no bonus features.
3 people found this helpful

AdamReviewed in the United States on November 7, 2021
4.0 out of 5 stars
For a 90's teen horror film, this one is definitely on my top 10!
Verified purchase
This is a great twist on invasion of the body snachers. It's definitlly a teenage drama, full of high school angst with a little alien trouble tossed in, but can be enjoyed by other viewers. I thought it was a pretty well thought out story, with fleshed out characters and an ending that's nicelly tied in.
One person found this helpful

RyanReviewed in the United States on September 28, 2013
4.0 out of 5 stars
Good 90s horror; Very good Blu-ray treatment
Verified purchase
This movie came out along with a very similar movie by the title Disturbing Behavior. This was the far better movie, both commercially and critically. The Faculty is highly derivative of the 50's "Red Scare" movies, particularly Invasion of the Body Snatchers. It also borrows very heavily--particularly in creature effects--from John Carpenter's The Thing. Nevertheless, it does so more so as an homage, and it in no way feels cheap or a rip off. From this standpoint it does rip off Wes Craven's Scream, with characters directly referencing horror movies as a way to understand the problems they are facing in their own movie. Nonetheless, the movie is great fun and a pretty good horror movie.

The Blu-ray treatment is quite good. My main complaint is that there is definitely some digital enhancement going on here, particularly with edge enhancement. It never completely oversteps its bounds, but it is definitely there. Otherwise the picture looks very strong on all fronts. The audio has the original theatrical Dolby and DTS tracks, as well as a stereo downmix for headphone wearers. The extras are mostly fluff. All in all, fans of the movie will really enjoy this Blu-ray. It is a very solid disc.
5 people found this helpful
See all reviews
Back to top
Get to Know Us
Make Money with Us
Amazon Payment Products
Let Us Help You
EnglishChoose a language for shopping. United StatesChoose a country/region for shopping.
© 1996-2021, Amazon.com, Inc. or its affiliates