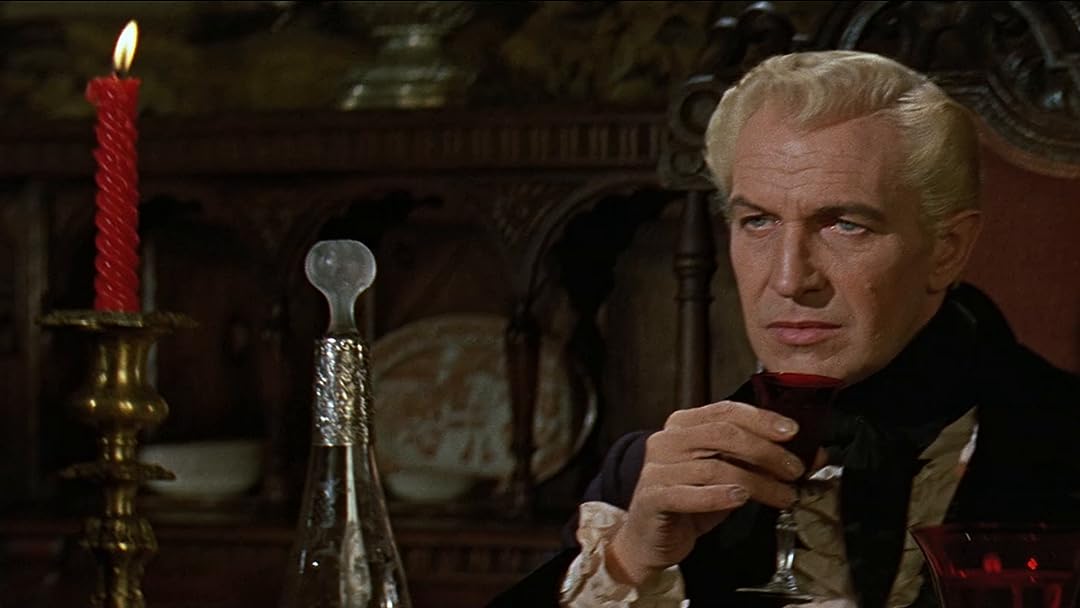 Fall Of The House Of Usher, The

A. RoseReviewed in the United States on January 31, 2019
4.0 out of 5 stars
What will a man do to prove that his obession is the truth?
Verified purchase
Another Corman attempt to bring the works of Poe to the screen, this one is based on a short story about an old family in an even older house, and the friend who comes to visit them. This movie, however, becomes more of a study in obsession. When a man comes to believe in an idea completely, how far will he go to prove it a reality?
Vincent Price stars as Roderick Usher, a man who suffers from what we now know as hyperesthesia, which means that his senses (taste, touch, scent, hearing) are all so sensitive that any loud noise, too much light, rough clothing, or certain seasonings in food can cause him extreme discomfort. However, it is Roderick's belief that his family is cursed that is the crux of the story. The Usher family has been beset by many members who were involved in less than savory professions (slave traders, assassins, embezzelers, smugglers), and this unique family heritage has convinced Roderick that any offspring that he or his sister, Madeline, may have will only continue an evil blight on the world at large. Because of this, he has made himself a prisoner in his family's old house, and intends that his sister do the same. The conflict comes when the young man that Madeline fell in love with on a recent trip to Boston shows up to marry her.
The acting in this is superb, with Mark Damon as the young fiance, Philip, Myrna Fahey as Madeline, and Harry Ellerbe as the loyal butler Bristol. The sets are appropriately dark and moody, just the right atmosphere for the drama that plays out between the characters. What will a man do to prove that his obsession is the truth? Sometimes the answer is absolutely horrible.

Todd M.Reviewed in the United States on January 22, 2022
3.0 out of 5 stars
It didn’t stand the test of time well.
Verified purchase
I say this back in the day when it was first released and on a huge screen, and me at a much younger age, it was a somewhat scary movie. Now, it’s a good drama about the fear of being buried alive but it’s not what I’d call horror. For all the schlock Roger Corman put out I think he did a pretty good job on the Poe material with Vincent Price. Decent story that doesn’t even deliver a jump scare and, other than Price, the casting is not all that great. We didn’t want a long movie just before bed so the shortness of this was a plus. There’s a lot of dialog and long shots but nothing much to hold the attention of anyone expecting a horror movie.

warrenReviewed in the United States on June 23, 2019
5.0 out of 5 stars
Love this movie.
Verified purchase
I you want to watch this on a U.S. region blu ray you try and play but push the title menu right after you push play do it fast thought or else it won't play.
One person found this helpful

Veronica WalkerReviewed in the United States on April 23, 2021
1.0 out of 5 stars
something wrong with it.
Verified purchase
The movie did work on blu ray player.send back for refund.

PaulReviewed in the United States on March 19, 2017
5.0 out of 5 stars
Five Stars
Verified purchase
It's a classic Vincent Price. Need I say more!
One person found this helpful

The-Truth-ReviewReviewed in the United States on December 15, 2012
3.0 out of 5 stars
Not 16x9
Verified purchase
Five-star movie but the download version is not 16X9 widescreen enhanced. This version's aspect ratio is 2.35, so it appears very small on your TV unless you use your TV's enlargement capability. The video quality is sharp and clear (unlike the "House of Usher" download version of the same movie).
One person found this helpful

benReviewed in the United States on November 15, 2015
5.0 out of 5 stars
I love it. Vincent price in a classic role
Verified purchase
This movie is an oldie but a goodie.I love it.Vincent price in a classic role,doing what he does best.It takes a while for the story to unravel but it all makes for a slow creep into madness,which is what make this film fun as well(for a poe tale),I had to own this for the sheer fact that it is a film oddity but great,what a classic story.
See all reviews
Back to top
Get to Know Us
Make Money with Us
Amazon Payment Products
Let Us Help You
EnglishChoose a language for shopping. United StatesChoose a country/region for shopping.
© 1996-2022, Amazon.com, Inc. or its affiliates