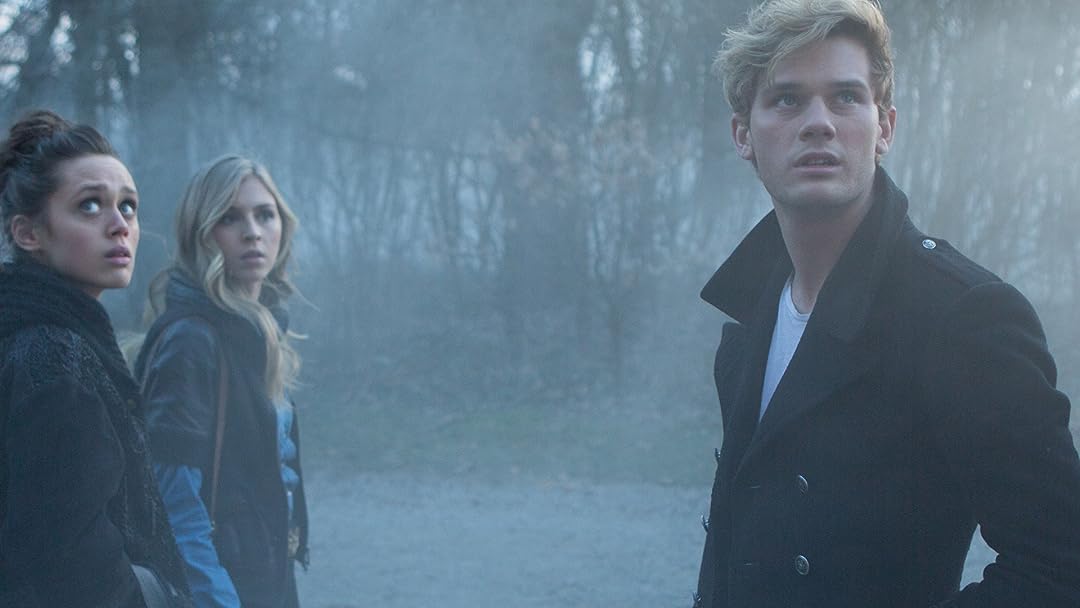 (4,618)5.41 h 31 min2017PG-13
Upon entering a mysterious reform school, Luce finds herself drawn into a love triangle and discovers her own love story that has been ongoing for centuries.

KCReviewed in the United States on September 28, 2017
4.0 out of 5 stars
Quick read, quick movie
Verified purchase
As with any movie, the book is always better. What was an hour and a half movie seemed more like half an hour. I did love the movie, just not as much as the book. The actors portraying the characters were pretty close to the descriptions in the book, and the movie followed the book more or less. There were many book parts left out of the movie, but the important details were there.

I've seen this story compared to Twilight. Fallen is the same genre as Twilight, the young adult/romance genre. I've also seen reviews that criticize the religious connotations of Fallen. It's a story, and that's all. Angels and Lucifer provide a backdrop for this story, but it's just a YA romance, like Twilight and vampires and werewolves.

Overall, there was a good story line. The movie felt rushed. The characters, while portrayed well,were under developed. Some of the scenes/visual effects were a little hokey, and that's to be expected when presenting the supernatural. But the movie flowed smooth and quick, it certainly did not drag (as some parts of Twilight did drag). If you read the books, you could pick apart all of the missing lines and scenes. I did read the books, and watched the movie for pure entertainment value. If you read the books and liked them, then give it a try. If you didn't read the books, and you don't like young adult romance with a supernatural flare, this will likely not be your type of movie.

Abigail EnglerReviewed in the United States on September 1, 2017
5.0 out of 5 stars
Best 'Young Adult' Film To Date
Verified purchase
While I have a few minor issues with the plot and the way they go about telling the story, overall 'Fallen' is THE best young adult film to date. The acting is ridiculously good, the cinematography and score where on point, and the graphics and CG stuff looks beyond believable! Adults can watch this movie and not cringe. I find in most 'young adult' movies the acting and graphics are cheap and hard to watch. 'Fallen' is captivating. As an adult I actually enjoyed this film and have rewatched three times now. I just can't get over the phenomenal acting! They pull you into this world that you don't want to leave. I really really hope they continue to make this series, I'll be really disappointed if the studio abandons ship because it didn't make them enough money in theaters.
17 people found this helpful
Report abuse

Jennifer AnnReviewed in the United States on August 27, 2017
5.0 out of 5 stars
So well done! There better be a sequel!
Verified purchase
I can't believe it took this long for Fallen to be made a new movie, but I'm glad they took their time because the acting and cinematography were top notch! I honestly don't remember all the details of the book because I haven't read it in so long, but even if this didn't follow Ms. Kate's brilliance to the letter it was still a great movie on its own. But I really hope there's another movie because there's so much more of Luc and Daniel's story to be told!
18 people found this helpful
Report abuse

FerdyReviewed in the United States on February 20, 2021
4.0 out of 5 stars
It was an ok movie
Verified purchase
I get why this wasn't a big hit having read the books and seen the movie. Unlike "Twilight" which it gets compared to a lot and followed the book religiously, this one does not. Perhaps that's its failing to capture and keep their audience. The books are sensational and would have made fantastic movies. They basically went off the rails from the storyline so much with the first book Fallen, it made it muddy and confusing at times. They pretty much shot themselves in the foot for more movies in the series. What a shame. So much potential gone to waste. As for the actual movie, if you haven't read the books and just watch the movie, it's not bad. You get the basic premise of the story, but it gets wacked by the end. Also, one very irritating thing, was all the out of focus use during the entire movie. I like to be able to see details even in the dark which most of this movie is. Not dark, the emotion, but dark as to lack of brightness in the contrast. Good grief. This could have been so great as their cast was perfect for these characters with fantastic chemistry which was pulpable. If you're into Angels and love stories, then this movie will entertain, but don't expect any sequels in the future.
2 people found this helpful
Report abuse

CandyfaireyReviewed in the United States on January 17, 2018
4.0 out of 5 stars
Good
Verified purchase
I started reading the books in high school and was excited for the movie. Finally it was available for purchase, but I approached with caution as it didn't get its theater release which is never a good sign. If you're a fan of the books I think you'll like this as it brings the characters and story to life and has some hints from the rest of the books. If you want fantastic cinema quality it might not be for you. The special effects and some of the acting can be a bit cringy at times, but I really like the actors for Luce, Daniel, and especially Cam. Overall I enjoyed it.
13 people found this helpful
Report abuse

K. WaringReviewed in the United States on September 9, 2017
4.0 out of 5 stars
3 1/2 Stars. Take it for what it is and enjoy!
Verified purchase
This is not great cinema, but that doesn't mean it isn't fun to watch! This plays as your typical YA paranormal romance, but that isn't necessarily a bad thing. It's not original, but if you're looking for an angsty, mysterious modern teen fantasy, this should be your cup of tea. In my opinion, it's a fun popcorn film for a girls' night in.

I am a fan of the books, so I was interested to see how well the story could make the leap to a motion picture. I thought the film was perfectly cast, with the actresses for Luce and Penn as particular standouts. I would love to see these ladies in more things in the future! For a film that had trouble finding a distributor, I wasn't expecting much in terms of quality. However, the production values were impeccable. The cinematography is muted and lovely to look at, and the soundtrack fit the mood of each scene. From what I understand, many parts of the movie were filmed in Hungary--and although the story doesn't leave the grounds of the school much, the beautiful setting was perfect for the story.

The one major flaw of the film, as others mention, is the rushed and abrupt climax. I don't know if another film will be made in the series (I hope so, but won't hold my breath), but you can always go read the books to find out how the story ends if you want closure.

I say give the movie a chance. I enjoyed it and will happily watch it again.

Russell SReviewed in the United States on April 27, 2020
4.0 out of 5 stars
Beautiful folks in a lovely movie
Verified purchase
What a gorgeious young cast. First i have to say that i have never read this book or the series. Second, why haven't any more of these movies been made???? This is what bugs me. It is very obvious that, by the end of this one you can see that it needs to be continued. This bothers me. This is a typoe of Twilight film with fallen Angels. It is interesting and i was loving it once we got past the angsty teenage types. I just wish these were made, it took away fro any type of real enjoyment that i would have gotten here. Good for young folk but you will hate the end, i did. I thought that Jeremy Irvine did a wonderful job.
3 people found this helpful
Report abuse

TXBRITGALReviewed in the United States on November 26, 2017
5.0 out of 5 stars
Stunning story and visuals!! 😇
Verified purchase
I for one had not read the best selling Lauren Kate book this film was based upon (though after seeing this film I'm SERIOUSLY thinking of getting the series). However I am a fan of the series it's been compared to (MORTAL INSTRUMENTS, TWILIGHT).... I was initially unsure if it was a remake of the film/miniseries of another book series about a young teen boy who discovers on his birthday he suddenly has powers and is indeed a nephilem. In that film the main role was played by Paul Wesley of Vampire Diaries fame. I watched the trailer of this current movie and was utterly blown away! Although it is indeed a completely different series not associated with the other film... I immediately knew I wanted to watch. In every film or tv series I've seen with angels, I've never seen such a stunning and creative take on the wings. So unlike the typical supernatural or angelic films out there... The film was Moody which totally fit the story line... After all the main young lady that the story surrounds (Luce) is at this posh boarding school Sword and Cross as she's thought to have mental instability. From childhood she's had visions or memories that never make sense... Not to mention something she refers to as her "shadows" which seem to appear before some tragic events around her. After a horrible event in her life occurred the court ruled she needed to go to a medically supervised school... Enter Sword and Cross. Upon first entering this Gothic mansion she instantly felt different. There was an air around many of these people.. As if they were other.... And then there was HIM. The mysterious guy from all these visions. What does it all mean? Is she going crazy? Is there a reason behind all this after all? Take the plunge and find out... Warning; no sparkling vampires here... Plenty of brooding, longing, and self sacrifice though. In for one have my fingers crossed for a sequel. After all, there are a number of books in this Lauren Kate series... So there *is* hope!!
7 people found this helpful
Report abuse
See all reviews
Back to top
Get to Know Us
Make Money with Us
Amazon Payment Products
Let Us Help You
EnglishChoose a language for shopping. United StatesChoose a country/region for shopping.
© 1996-2021, Amazon.com, Inc. or its affiliates