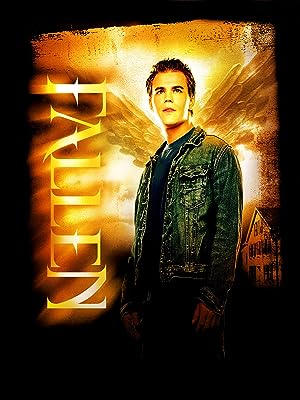 (184)
6.51 h 24 min2006PG-13
In a classic battle of good vs. evil, Fallen chronicles the journey of an 18-year-old, who struggles to come to terms with his newly discovered identity as he is drawn into a world where angels -- good and evil -- walk among us.

Mark J. HouseReviewed in the United States on January 9, 2015
5.0 out of 5 stars
Fallen
Verified purchase
Torn between good and evil, like all beings with free will are, Aaron Corbett is in high school and is doing very well in academics and athletics. When he becomes 18 years of age, he notices that he has abilities beyond other human beings. Paul Wesley plays the role of Aaron Corbett and you should recognize Paul from The Vampire Diaries on CW Network. It is revealed to Aaron that he is a Nephilim, a genetic combination of human and angel which makes him a target by both the afterlife and other humans. He soon discovers that not only is he Nephilim, he is the most important one in history! He is then called The Redeemer, a Nephilim with the astral power to reform demons back into angelic form(s). He fights both angels and demons to survive and then must confront Lucifer/Satan played by Bryan Cranston of Breaking Bad fame(Walter White). I will just say the bad cliche used, spolier or not, in this movie when Lucifer/Satan tells Aaron that he is Satan's son which sounds entirely too much like Star Wars. Lucifer even says to "search your feelings and know it is true". Stolen line/scene from Star Wars anyone? However, just about every comedy show I have ever watched that talks about Star Wars uses that line anyway. Fallen is NOT a comedy though. Fallen is fantasy/religion/action. This film is based heavily on the Holy Bible and although the storyline probably never happened entirely the way told, true believers know that similar events have happened in the past several millenia(4-5,000 years)ago. "And the Sons of God came to Earth and mated with the daughters of humans":Genesis. Look it up. If you liked The Prophecy starring Christopher Walken in a film about angels fighting each other, you will like this film although Fallen is not quite as dark or gritty. Fallen is a little more made for family entertainment but do not let that fool you; there is plenty of martial arts style action with swords of fire and karate/muay thai style action! Look for stars of other films in this movie and be pleasantly surprised. Remember the opponent of Electra in the Jennifer Garner film? He plays a Kung Fu/Wushu angel that enjoys his job TOO much. I would rate this film in the PG to PG-13 area due to swordfighting, martial arts strikes and kicks, and fireball throwing although no blood is shown. Enjoy!
3 people found this helpful

pleineluneReviewed in the United States on June 20, 2020
4.0 out of 5 stars
I ENJOYED IT DECENT ACTORS, LIKED THE PLOT
Verified purchase
NOT FIVE STARS, but I thought better than three. READ the synopsis, see if this is the kind of show you would like.
Production isn't the best, but not bad. Worth the watch for me.
One person found this helpful

Rodney C WalmerReviewed in the United States on April 15, 2014
4.0 out of 5 stars
The wife and I enjoyed this
Verified purchase
Here is a boy turned half angel, sought out by god's killer angel's, trying to live a normal life saga. The story is good, not great, hence the 4 stars and not five. You may feel different however. The special effects are top notch. The characters portrayed well, though Paul Wesley seems a little out of place here after seeing him in Vampire Diary's. Would I recommend this yes and no. Yes, to anyone who enjoys this sort of stuff and no to anyone looking for A movie quality. This is defiantly far better than B movie quality but less than A Movie quality, it's somewhere in between.

BlackDragonReviewed in the United States on June 17, 2010
5.0 out of 5 stars
The Fallen (DVD)
Verified purchase
Based on the FALLEN books (eg. Fallen, Leviathan, Aerie & Reckoning) written by Thomas Sniegoski . . . unfortunately (as with most movies) it doesn't follow the true path in the books. Personally I found the books to be far better. The movie was good in its own way, but I like the way the book ended better than the movie.
Originally an ABC family mini-series, which was first aired in 2006 (The Time of the Redemer) and followed with additional episodes in the summer of 2007 (Mysterious Ways and All That, Someone Always Has to Die and Il Gran Rifiuto aka the Grand Refusal).
The movie introduces us to Aaron Corbett . . . a Nephilim . . . the offspring of an angel and mortal woman. Hunted by the Powers leader Verchiel (a woman in the movie), Aaron is informed by a Fallen Angel of his TRUE nature. Of course he is in denial, but events slowly unfold as his angelic powers start rising to the surface. When Verchiel goes to his home she's hell bent on anniliating him, but after blasting him into fire he walks out, his angelic nature surfaces and he battles with her. He is then forced to flee home with the angel Camael and his dog Gabriel, he leaves all his loved ones behind.
A prophecy foretold " . . . in the footsteps of his father, in the sign of Virgo, a Redeemer will be born. His hands will deliver fair judgement. Ye will know him by his markings, names on his flesh reveal his mercy. The Redeemer shall judge what the Fallen have done and bring the Fallen to ascension and glory one more. Many shall seek him. Those meaning to destroy him will guide him to his fate. Again all of the damned or Fallen shall know Paradise, once again the Fallen will have time to make right where they went wrong."
During an encounter with the Powers Camael is wounded. They search for the angel Ariel, who is a gifted healer. Aaron visits a college campus and learns more about the stories of angels and the Fallen from a professor. The professor takes Aaron to his home to show him proof . . . Aaron sees Vilma, a girl he knew in high school . . . she is a Nephilim too.
After rescuing Vilma, the Powers are hot on his trail, now lead by Mazarin they continue to hunt him down. Camael tells Aaron and Vilma to flee, and he is captured by the Powers. Another fierce Fallan warrior angel by the name of Azazel joins Aaron, Vilma and Gabriel. Azazel lies, and tells Aaron that Camael is dead. He promises to take Aaron to the Light Bringer, the oracle who wrote the prophecy and who would be able to tell Aaron WHO his angelic father is.

Unfortunately this mini series stirred up alot of controversy (not too surprising), as some folks fail to realize this is a work of FICTION and a MOVIE (not a documentary). Some religious folks are probably offended because this story does not follow the Bible . . . hello, this is "fantasy" all things go, it does NOT have to follow the Bible. Seriously, I think the movie portrayed LUCIFER as the BAD guy (as do most religious writings), if the movie had followed the BOOKS, then religious folks would REALLY be offended . . . the books are far more graphic and violent and portray the first of the Fallen, Lucifer, as a person you feel sorry for . . . anyhow, just enjoy the movie for what it IS . . . a wonderful story with nice special effects. I thought it was AWESOME! So glad it FINALLY came out on DVD, been waiting a LONG time for that!!!!!!!!!!

PscychobabbleReviewed in the United States on February 25, 2014
2.0 out of 5 stars
Which hadn't wasted my time
Verified purchase
My opinion is probably biased because I really liked the books. I especially liked how the author of the books made Lucifer someone you could really like and stepped away from the traditional view of Lucifer that the movie chose to go with. The book was about redemption and forgiveness and the movie was about keeping the story simple. I suppose if there had been more action and some connection between any of the characters I could have viewed this as a passable show, but that was not the case. So, if you really liked the character development and stepping outside the box that the book did you will not like the TV shows and should spend your money elsewhere.
3 people found this helpful

LibbyRoseReviewed in the United States on March 15, 2013
1.0 out of 5 stars
Uneventful and nothing like the book
Verified purchase
To be fair I must admit I only watched the first part of the series but it is enough to make me realize how terrible the movie are mini series actually is. It has nothing or rather hardly anything in common with the books the lead angel instead of being a male is a female, the lead character doesn't work add a veterinarian's office like he does in the book and the big clincher his foster parents don't die in the end and his foster brother doesn't get kidnapped that's what made me stop watching a movie cause how can the brother not get kidnapped and the movie be anything remotely close to the book. Needless to say the movie was exceptionally painful to watch. DO NOT Waste your money!!!!!!!!!

Katelyn AntonReviewed in the United States on April 6, 2014
5.0 out of 5 stars
Fallen
Verified purchase
Paul Wesley is amazing in this film. If you like movies about angels and demons, war and chaos this is a film for you. Its a small mini series. All star cast, great special effects, this film will keep you interested. Unlike other films it goes in to detail about all characters as well as their backrounds, so you will be sure to learn things about angels and demons you might not have known before. I highly recommend it.

Rock ChickReviewed in the United States on May 28, 2010
5.0 out of 5 stars
Well Worth The Wait
Verified purchase
I've been waiting since this mini series/show originally aired on abc family (aka fox family) for it to be released on DVD. All I gotta say is it's about darn time. I know the only reasons it was released finally though is to capitalized on the attention Paul Wesley (aka Aaron Corbett) is getting lately. Since CW casted him as Stefan on Vampire Diaries. But anyways ya I'm glad Fallen is on DVD and recommend everyone whose a fan of Hal Ozan I think his name is (who played in an episode of Supernatural) in last season, Actor who played Fun Boy in the Crow TV Series and Paul Wesley from Vampire Diaries this mini series is for you.
2 people found this helpful
See all reviews
Back to top
Get to Know Us
Make Money with Us
Amazon Payment Products
Let Us Help You
EnglishChoose a language for shopping. United StatesChoose a country/region for shopping.
© 1996-2022, Amazon.com, Inc. or its affiliates