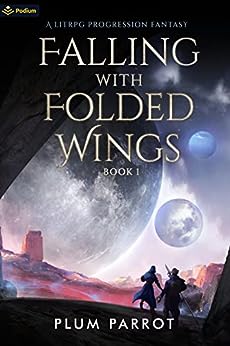 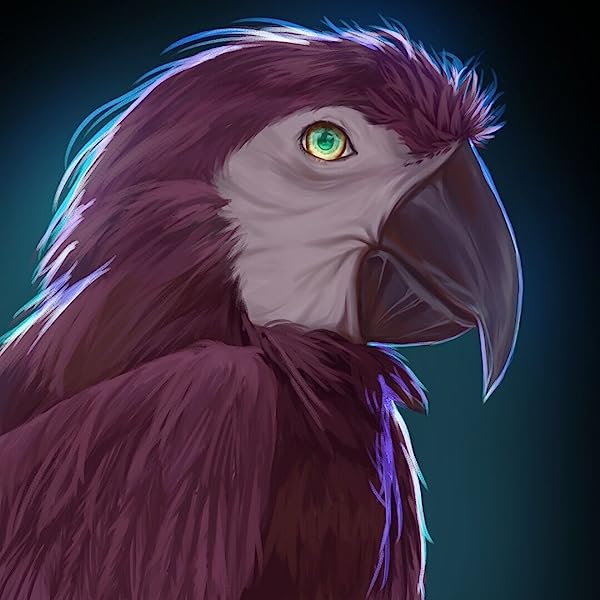 by Plum Parrot (Author) Format: Kindle Edition
See all formats and editions
Sorry, there was a problem loading this page. Try again.

Stranded on a hostile planet, one man finds himself thrust into a fight for survival that could decide the fate of an entire world . . .

As an engineer on the arkship Pilgrim-9, bound for the Tau Ceti solar system, Morgan Hall thought his life would revolve around maintaining and repairing the ship and supporting the needs of the five thousand colonists aboard. But when he’s roused early from a 240-year stasis, he’s confronted with chaos.

Along with his shipmates, Morgan is brought down to a planet teeming with peril. Forced to fight for their survival without any of their tech to hand, they must adapt quickly to overcome countless threats in a world where magic is as real as science. Eventually, they begin to create a new existence for themselves.

But just as they’re beginning to feel at home, Morgan and his fellow humans discover the planet is already inhabited by intelligent life-forms—and this native species is cunning, powerful, and all too lethal . . .

From the author of Victor of Tucson: The first volume of the hit LitRPG adventure series—with more than 400,000 views on Royal Road—now available on Kindle, Kindle Unlimited, and Audible!

Read more
Previous page
Next page
Due to its large file size, this book may take longer to download
All 1 available for you in this series See full series

Plum Parrot is the penname of author Miles Gallup, who grew up in Southern Arizona and spent much of his youth wandering around the Sonoran Desert, hunting imaginary monsters and building forts. He studied creative writing at the University of Arizona and, for a number of years, attempted to teach middle schoolers to love literature and write their own stories. If he's not out enjoying the beach, you can find Gallup writing, reading his favorite authors, or playing D&D with friends and family. --This text refers to the paperback edition.

Plum Parrot is the pen name of author Miles Gallup, who grew up in Southern Arizona and spent much of his youth wandering around the Sonoran Desert, hunting imaginary monsters and building forts. He studied creative writing at the University of Arizona and, for a number of years, attempted to teach middle schoolers to love literature and write their own stories. If he’s not out walking his big Airedale terrier, you can find Miles writing, reading his favorite authors, or playing D&D with friends and family.

How to find Plum Parrot:

Early access to upcoming chapters and stories on Patreon:

Chat with him on Discord:

Tortuga V.
5.0 out of 5 stars Great fusion of litrpg and cultivation
Reviewed in the United States 🇺🇸 on November 16, 2022
Verified Purchase
I really enjoyed the book. It has a nice blend of cultivation and leveling, hitting the right notes of challenge and progression. There are strong cultivation elements with an interesting level and class system (and without excessive exposition on the act of cultivating). Though I found that it takes some inspiration form DoTF, the system (and System) felt most similar to The Legend of Randidly Ghosthound. It also has multiple POVs, though the MC is far more social and not so overpowered. It is also a system apocalypse, though with a neat twist on it.

Overall, I think Plum Parrot pulled off the multiple POV well even if some felt added just for world building. Each POV had a distinct personality, and I liked most of them.

My only concern was with the last quarter of the book. It felt rushed with major things just resolving way quicker than in the first half, which was definitely page-turning. It wasn’t enough to lose a star, but I hope it doesn’t continue that way in the next book.

Otherwise, the writing quality is good. It has some romance (no harems, some LGBT). The romance elements aren’t over the top, and they deepen the characters.

I definitely recommend. One of the better litrpgs released on the last few months.
Read more
Helpful
Report abuse

Big Dee
4.0 out of 5 stars pretty good
Reviewed in the United States 🇺🇸 on January 9, 2023
Verified Purchase
Nice sci fi aspect to introducing humanity into a litrpg system. The main character was OP but not so bad. It had a very sprinkling of town/colony building which is always fun.

Ian England
5.0 out of 5 stars came outta nowhere
Reviewed in the United States 🇺🇸 on December 16, 2022
Verified Purchase
This book was a true surprise. It seemed like an odd synopsis when I saw it but thought, eh, why not give it a try.

Holy Cow. I’m stunned. This book has a feel for the characters and a living touch to the world building that just smacks as a touch more real than 99% of the other authors trying to do the same.

Read this book if you love LITRPG. It’s worth it!

bestcoaster
4.0 out of 5 stars Not bad, but...
Reviewed in the United States 🇺🇸 on December 8, 2022
Verified Purchase
Why was an entire plotline entirely abandoned 20% of the way through the book? Whitestar doesnt even get mentioned again after page 100, doesn't meet Bronwyn, nothing. Otherwise fairly straightforward and enjoyable portal fantasy, although the aspects of forming a new society are abbreviated in favor of character-focused adventure.
Read more
One person found this helpful
Helpful
Report abuse

Andrew K
3.0 out of 5 stars Written like it came from Royal Road
Reviewed in the United States 🇺🇸 on November 24, 2022
Verified Purchase
The biggest, and only flaw in this novel is the ridiculous quantity of perspective changes among characters. It's obvious this was either a distinct choice on the authors part, or this originally came from Royal Road and he needed filler chapters.

The POV changes means that there's almost no immersion in the book as it's constantly broken by the shifting, it also means that while the book itself is a good length, you're really only getting 1/3 of the actual story as every character is a main character and the author feels the need to tell what they've been up to. Character development is extremely weak, and emotional/mental growth is non existent as well. Simply put, there's too many main characters and they all lose value and substance because of it. What the readers are left with are a bunch of low tier, C grade characters that belong on the value menu.

Due to sheer amount of POV changes, this five star book drops to 3 stars. Barely. It honestly is in 2 star territory. I'm truly sad I had to write this review, the story was excellent, the premise was unique, and I enjoyed the themes. It also didn't feel too tropey. Everything about this book deserves to be 5 stars, it really does. However, the POV shifts are such a major detriment to the story and quality that I honestly cannot recommend this book.

Conclusion: The failure of this book lies soley in the authors lap due to his decisions. I'm genuinely angry that the author has destroyed his own story, which had such a strong potential to be one of the best series in the genre.
Read more
13 people found this helpful
Helpful
Report abuse

Meh
5.0 out of 5 stars Good stuff
Reviewed in the United States 🇺🇸 on December 17, 2022
Verified Purchase
This is quality work. I'm surprised it's been panned so far. It's definitely worth the read. Mixed cultivation/litrpg with classes. Not too crunchy
Read more
2 people found this helpful
Helpful
Report abuse

Good Friend Reader
4.0 out of 5 stars Meh...
Reviewed in the United States 🇺🇸 on November 14, 2022
Verified Purchase
Great writing but has a checklist feel. Ridiculous love interests. Teeters on creative and unique then quickly goes to cookie cutter mass appeal. Targets a mature audience then a childish one. Pedantic and unnatural build, but that's typical of the genre.
Read more
4 people found this helpful
Helpful
Report abuse

Arthur Cuelho
5.0 out of 5 stars Good read.
Reviewed in the United States 🇺🇸 on December 14, 2022
Verified Purchase
Cultivation Litrpg, some base building. Overall a solid story and I am looking forward to the next book in the series.
Read more
2 people found this helpful
Helpful
Report abuse
See all reviews

Bob
5.0 out of 5 stars Epic LitRPG
Reviewed in the United Kingdom 🇬🇧 on November 13, 2022
Verified Purchase
An absolutely superior new first book. Head and shoulders above 90% of normal kindle books.

The quality of writing is high standard and I did not notice any obvious grammar mistakes.

I read it in 24 hours and was enthralled. Going straight for number 2 now.
Read more
Report abuse

Michael Jackson
5.0 out of 5 stars Awesome
Reviewed in the United Kingdom 🇬🇧 on December 1, 2022
Verified Purchase
A fantastic read from cover to cover, if you want a zero to hero cultivation with litrpg base building fighting and multiple main cast then start reading this book.
Very few times i get engrossed into a book that i have to just read the next page to find out whats going to happen, please write the next book as soon as possible.
Read more
Report abuse

Athena
5.0 out of 5 stars Too many POVs
Reviewed in Australia 🇦🇺 on November 19, 2022
Verified Purchase
Good first book, strong mix of standard litrpg and cultivation. Good range of characters including women, decent plot with engaging storylines, good level of system info that informs without overwhelming.
Story started strong and unique with a sci-fic colony ship approaching a newly System-integrated world, but unfortunately lost that uniqueness after the first chapter, becoming a very standard fantasy-esque System world, with no high tech or sci-fi themes. For a colony ship the populace seems oddly unready to establish a functioning government.
Biggest flaw for me in the book would be the switching POVs, which is a flaw common to newer writers. Too many protagonists, and honestly we don't need to hear ALL the stories. Unfortunately I expect this will be an issue that worsens rather than resolves, as the author gets attached to all their favourite characters and wants to tell all their stories in more and more detail. There's a reason 99.9% of published authors don't try for multiple POVs; it weakens narratives, it doesn't enhance them.
Read more
Report abuse
See all reviews
Report an issue
Does this item contain inappropriate content?
Report
Do you believe that this item violates a copyright?
Report
Does this item contain quality or formatting issues?
Report