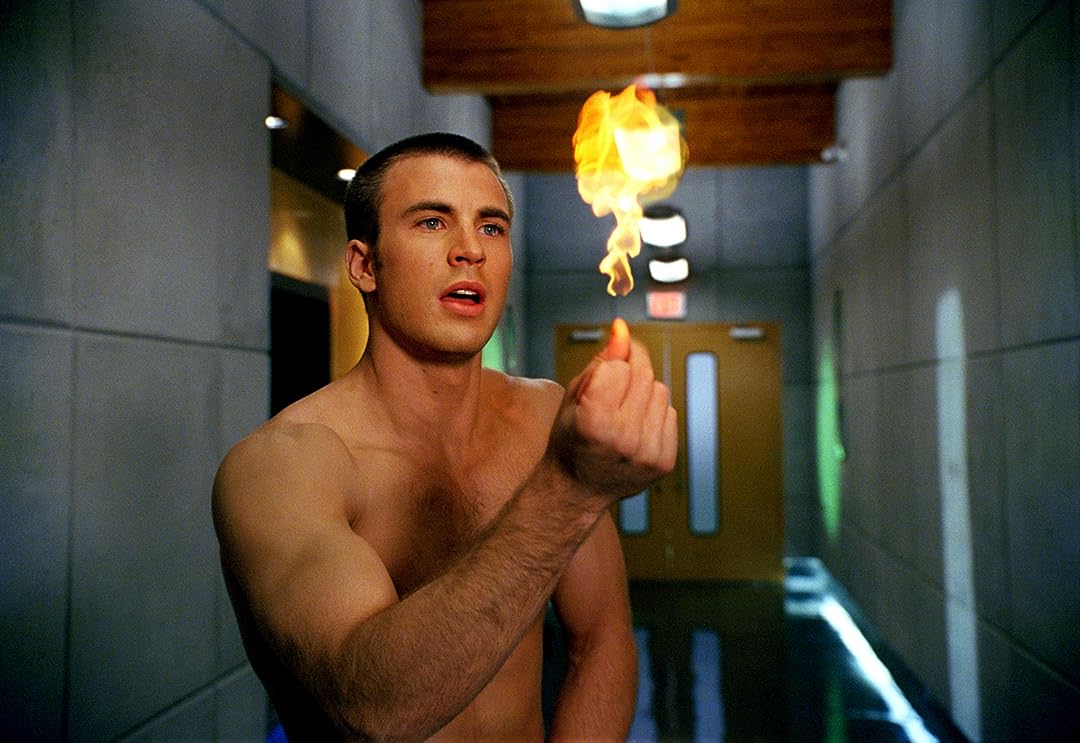 David E. BaldwinReviewed in the United States on October 25, 2018
4.0 out of 5 stars
Don't Wait Past the End Credits
Verified purchase
This one was released when Marvel was still finding its voice as a brand. The X-Men movies came before as well as Spider-Man but they still weren't established as the name in quality that they've come to be known today. If memory serves the mainstream critics dismissed it out of hand for some unbeknownst reasoning. Who knows. Maybe Jessica Alba's presence in the cast drew their ire. Too bad because she is quite good here. Chris Evans flashes the same charisma as the fans of Captain America came to know him for. Michael Chiklis delivers poignancy as the Thing. Lone quibble is the villain is pretty generic. Plotwise pretty serviceable as an origins flick. Ditto for the FX. Not as transcendent as later Marvel efforts but I enjoyed it a lot.
6 people found this helpful

joel wingReviewed in the United States on July 3, 2020
3.0 out of 5 stars
Despite some issues the overall story saves the day
Verified purchase
The Fantastic Four along with Spider-Man, Ghost Rider and Blade were Marvel’s earliest attempts at getting into the movies before the Marvel Cinematic Universe took off. The story focused upon the origins of the group and their arch nemesis Dr. Doom. While the movie got panned by some it wasn’t bad.

First what the movie got right was capturing many of the core elements of the comic books. For instance, Johnny Storm (Chris Evans) was portrayed as immature and impetuous. It had Reed Richards promise Ben Grimm (Michael Chiklis) he’d reverse his condition when he turned into The Thing. It also played with the characters’ powers like Grimm not being able to pick up utensils because his rock hands were too big or Johnny making popcorn by holding a popcorn bag in his hand and heating it up with his superpower.

There were still some problems. Casting Jessica Alba as Sue Storm and making her dye her hair blond was not a good look. The make up they did on Chiklis to transform him into The Thing also needed a lot of work. He didn’t look big or menacing like the character was supposed to. They also had some bad writing like Grimm’s fiancé dumping him on a bridge after he just saved some people or Johnny getting bored so he decides to take part in a BMX event on ESPN.

Still, the story overall was good with them facing off against Victor von Doom (Julian McMahon) at the end. People could hold their nose through the questionable parts and enjoy the movie overall.
C

Paul S. PersonReviewed in the United States on March 5, 2020
4.0 out of 5 stars
More Watchable Than The Remake
Verified purchase
I saw the remake first, some years ago, and was not impressed. I'm not actually impressed with this version either, but it does make a bit more sense and left a better impression on me.
I am not a comics reader, and so I have no idea which film better follows the "official" situation. If there even is one; apparently, everything changes every so often, so what does it matter what a film does?
If you skipped this one and didn't like the remake, you might want to try the original. You might like it better.
2 people found this helpful

Tara B. MorowitzReviewed in the United States on March 25, 2014
5.0 out of 5 stars
Good clean fun with heart
Verified purchase
I like this movie. I'm 37 years old and not a superhero fanatic or anything, but this movie has a charm that takes it beyond the ordinary bang-zoom superhero thing. And it's appropriate for my kids, there is no torture, rape, blood, shooting, and very little violence. As a result, when the villain kills even one person, it's appropriately shocking and sufficient evidence of his evil. He doesn't have to have a huge body count or level a city. I am so tired of super-villains smashing New York City. We had real planes smashing us, people. It's too soon. Anyway, the four main characters are refreshingly real, they have feelings and flaws and hopes and dreams, all derailed by their exposure to a weird space storm of some sort. They slowly begin to realize that they have been altered, and their reactions differ based on what their mutations are and what their personalities are. Usually in these movies there is one person dealing with their super-mutation alone, but in this case there are four, and they have to learn to work as a team when the fifth mutant decides he wants to get rid of them and, presumably, take over the world. By the end they have come to terms with their new states, and even the guy who got turned into a rock monster has chosen to continue that way rather than be mutated back. So, the plot is primarily about the process of discovering and coming to terms with new superpowers, and it's a good metaphor for anyone's coming of age story. And the progression to superheroes is sufficiently believable, even explaining the practical reasons for their matching suits. I give it 5 stars because in its human-centric story and lack of violence, it accomplishes what movies like Man of Steel could not, even with all the eye-popping smashing.
One person found this helpful

Luke SkywalkerReviewed in the United States on February 22, 2014
5.0 out of 5 stars
A Great Take on a Great Comic Book Franchise
Verified purchase
I love Marvel comics in all of its various forms. I have watched every single Marvel comic blockbuster film that has ever been done. Some are fantastic, and some are not so good. Thankfully the Fantastic 4 falls into the fantastic category (and yes, this time the pun was intended.) This is a fun, feel-good, superhero movie that hooks you right from the get go. At the core is the story of 4 individuals who have to put aside egos and/or personal histories in order to come together and become a team. Each actor played his and/or her role perfectly and the result is a rousingly fun movie that keeps you cheering for the heroes all to way to the end. Julian McMahon was a maniacal, power-hungry Dr. Doom, Ioan Gruffudd plays the part of the "dumbest smart person" extremely well, Michael Chiklis makes you feel for his character and the burden he must bare, Jessica Alba's Invisible Woman is easily the heart and soul of the team, and Chris Evans plays the human torch to perfection. I was so upset to find out that Chris would be playing Captain America, because that meant that there would be no more Fantastic 4 movies (although, I do have to admit, he is also brilliant as Steve Rogers). The Fantastic 4 is a great film that will just make you feel good. Keep em coming Marvel!
3 people found this helpful

Autumn WitchReviewed in the United States on February 20, 2012
5.0 out of 5 stars
Very underrated film....
Verified purchase
I don't care what anyone says, this is a very entertaining film, with great actors and a film that was very faithful to the spirit of the comic book it was inspired from.

This film gets a lot of rap because it was made for a younger audience BUT I don't know what the heck anyone expected. This film does not lend itself to being dark which is what seems to be en-vogue these days. But I am glad they didn't. My kids and I loved it.

The only issue I have with it is the casting of Jessica Alba as the Invisible Woman but now that they have done two films with her I have just dealt with it.

This is the origin of the Fantastic Four and their arch-villain Dr. Doom. The film mostly deals with the four main characters coming to terms with their changes after being exposed to cosmic rays while in space. There are a few side stories like the three way romance between Reed Richards, Sue Storm and Von Doom. There is also a story line dealing with the demise of Von Doom's financial enterprise.

In the end the four main characters must join forces to defeat a power hungry Von Doom who ends up being the bad guy.

Very entertaining film. Has bits of comedy, drama, romance and intrigue. Don't let the teenage crowd turn you off, its very entertaining!
5 people found this helpful

Stephen M.Reviewed in the United States on March 24, 2020
2.0 out of 5 stars
Only for true collectors
Verified purchase
Arguably the worst comic-related movie of the 2000's, this is really only for those who are truly trying to complete their collection on blu-ray. You can probably get this used for $1 at a second-hand store, but if you're looking to pick up a new copy, and this isn't more than $5, it's fine.

M. CookReviewed in the United States on September 1, 2007
5.0 out of 5 stars
FANTASTIC FILM!
Verified purchase
I'll admit that when I first watched this movie, I was rather sceptical and even somewhat cynical. I'd heard a lot of the rumblings that it wasn't "epic" enough and that they'd made too many changes, etc. However, when I sat down to watch this, it really won me over. Sure it's not the big action/effects blockbuster that it could have been, but that is really where it succeeds. If it had been made in that way, it would've been a lesser film. Allow me to explain. This film really captures the characters (their personalities, quirks and tensions) remarkably well. The emphasis IS on the characters. Not the effects or the action or the spectacle. THE CHARACTERS. The casting here is near-perfect. Jessica Alba probably isn't the right choice for the role, however, that said, she really does radiate a definite charm that won me over. Plus, Reed may not have noticed it (or at least he wasn't admitting it), she does look HOT in that outfit! Julian McMahon makes Doom his own, which more than makes up for the changes they made to his character. Michael Chiklis is perfect as Ben. But the real casting coup here, in my opinion, is Ioan Gruffudd. He is nothing short of perfect as Reed. Intelligent without being boring, confident enough to really convince as team leader. Tim Story really deserves way more credit than he received for making such a fine film. Pure entertainment from start to finish. And you can't ask for more than that.
And to all those who dismiss this DVD version of FF, both the JACK KIRBY: STORYTELLER and THE WORLD'S GREATEST COMIC MAGAZINE documentaries are worth it alone to buy this version. They are hands down some of the best documentaries I have seen regarding comics.
If you have any doubts whatsoever about whether it is worth the cost, please let me persuade you to buy it and buy it now! You won't be sorry!
3 people found this helpful
See all reviews
Back to top
Get to Know Us
Make Money with Us
Amazon Payment Products
Let Us Help You
EnglishChoose a language for shopping. United StatesChoose a country/region for shopping.
© 1996-2021, Amazon.com, Inc. or its affiliates