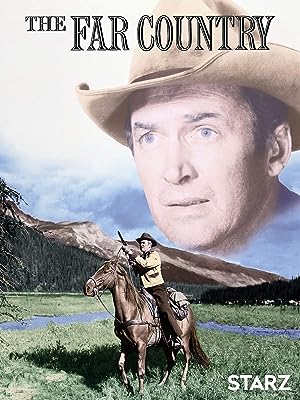 1954 was a transition year for American cinema.
For 35 years, the official aspect ratio for Hollywood films had been 1.33:1
Pronounced “one-point-three-three to one” - also known as 4/3 - also known as the “Academy Ratio” (same ratio as analog television).
In 1954 the “Wide Screen” aspect ratio of 1.85:1 was introduced.
But 90% of American movie theaters were not equipped with wide screens.
Universal Studios faced a quandary - they were in danger of at least temporarily losing 90% of their audience.
The solution was to introduce the concept of “open matte” for 1.33:1 film stock.
Anthony Mann’s ‘The Far Country’ starring James Stewart is an example.
Cinematographer William Daniels shot it on standard 35mm technicolor film stock, but was careful to leave plenty of room at the top and the bottom.
If it had been filmed five years earlier the blocking would have looked considerably different.
Universal used the same negative to prepare two different prints of ‘The Far Country’.

PHOTO 2: Wide screen 1.85:1 prints were prepared by applying a matte to the top and bottom of the negative (the director and cinematographer supervised the process).
Technically both 1.33:1 and 1.85:1 qualify as the “original aspect ratio”.
The 2019 Arrow Academy Blu-ray is the first American release of the 1.85:1 Widescreen picture (photo two).

PHOTO 3: A second Blu-ray is included. When I first heard this, I thought it might be the 1.33:1 open matte version, but it turns out to be an even wider 2.00:1 aspect ratio.
Universal’s rival Twentieth Century Fox had introduced “Cinemascope”, with an aspect ratio of 2.35:1 in an attempt to scoop the other studios and their puny “Widescreen” pictures. Hah!
In a desperate counter-move, Universal adopted the “Superscope” 2.00:1 aspect ratio for a limited number of prints.
A bridge too far?
The picture looks cramped to me (photo three).

“The original 35mm camera negative was scanned in 4K resolution at NBC Universal’s Studio Post facility.
The film was graded and restored at Silver Salt Restoration, London.
The original mono mix was remastered from the optical negatives at Deluxe Audio Services, Hollywood.”

For more about the five James Stewart / Anthony Mann Westerns, see Comment one (sort by "Oldest").

swansongReviewed in the United States on January 27, 2020
4.0 out of 5 stars
New Blu Ray review
Verified purchase
Arrow Films have done a wonderful job restoring this film. The picture quality is excellent for the most part, although there are sections where the quality drops due to the actual source used. Overall I found it to be a rather large step up from the previous DVD.

You get two different screen formats and the quality is the same for both. Disc one seems to be the theatrical version and disc two trims a bit off the top and bottom of the picture.

If you’re a fan of the film you should be very happy with the upgrade in both picture and sound. The release also comes with a lovely booklet with some great information along with some excellent photos.

Now if we could just get new restored versions of Winchester 73, and The Sons of Katie Elder, I’ll be a happy guy. As Criterion is due to release Destry Rides Again in April, rumors are that they will also restore Winchester 73.

Quiet KnightReviewed in the United States on November 26, 2020
3.0 out of 5 stars
The Far Country Is Found On Blu-ray
Verified purchase
Arrow Academy released this Universal Studios 1954 James Stewart western directed by Anthony Mann on Blu-ray in a 2-disc edition which includes the theatrical trailer from the DVD, but now also an audio commentary from film scholar Adrian Martin, still galleries, two featurettes about the film, director, and studio, multi-page booklet and slipcover!. Despite these extras, the HD transfer looks little better than the DVD, and the second disc is mostly redundant, since the difference in aspect ratios(1:85:1 & 2:00:1) is negligible, and not worth the bother. Film itself is mostly mediocre, though the on-location filming is beautiful.
2 people found this helpful

oldmoviefanReviewed in the United States on December 21, 2019
2.0 out of 5 stars
This is not an improvement
Verified purchase
This Blu-Ray is a total waste of money if you are wanting a clear picture. Might as well keep the old dvd.
Nice box, bunch of extras, but the picture is NO better than a used VHS. Maybe the original negative was lost
or damaged. Lots of scenes look to be out of register, soft, or shot through a screen door. Buy or KEEP the original
dvd.
4 people found this helpful

goodoldmacReviewed in the United States on October 29, 2015
4.0 out of 5 stars
First class Stewart/Mann Western
Verified purchase
This was the 4th collaboration between Stewart and director Anthony Mann, and man, (pardon the lousy pun) it does not get much better than this! This Stewart character is far different one than you usually see, not at all what you normally think of when you hear the name "James Stewart". Here, he is a far harder, much more cynical, 'bitterer' (I think that is a word) man than you generally see him protray. He and his partner, (Walter Brennan) move a small herd of cattle from Seattle to Skagway, Ak, then into the interior to Dawson in the Yukon and the gold strike going on there. It isn't quite that simple of course, and that is the movie... not one but two female 'love interests' compete for Stewart and John Ireland makes an excellent villian...
2 people found this helpful