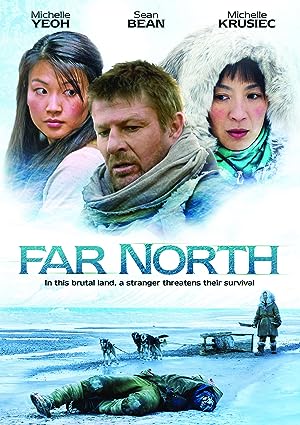 (121)
6.11 h 29 min2008R
Michelle Yeoh, Sean Bean and Michelle Krusiec star in this chilling epic thriller about the battle for survival, unexpected passion and the temptation of revenge. Haunted by a violent past, Saiva (Yeoh) and Anja (Krusiec) share an isolated, brutal existence in the desolate Arctic tundra.

MaryAnnReadsReviewed in the United States on November 30, 2018
4.0 out of 5 stars
Mesmerizing film
Verified purchase
I found this film fascinating. All three main actors handled difficult material very well. The photography was stunning, and so was the eerie, atmospheric musical background.

"Far North" is not for the faint of heart, and some scenes are quite difficult to watch. The film on the whole is well-worth taking the time to watch, though.

I do want to add that if you're looking for an action thriller, this film isn't going to fit that bill. It's mostly quiet, character-driven, and slowly building to the wrenching conclusion.

Ricardo OlivaReviewed in the United States on January 18, 2015
5.0 out of 5 stars
Powerful and haunting film
Verified purchase
Stunning and beautiful in the same sense the wild polar regions are so. Indeed, the wild is the main character in this film. Michelle Yeoh's work is superb and she manages to express an immense inner intensity without saying a single word. This is a staple of her great talent as an actress. I was expecting more of a chance for Sean Bean to display his own talent but the story does not lend itself to much dialog. Still, he does a a very fine job. I also enjoyed Michelle Krusiec's work very much. Quite a talented trio of actors.

I would like to say that photography is one of the best things of this film, but then i feel that the whole film is one greatly underrated jewel of a movie. The story is so different and unexpected and i feel very well adapted for film. I love everything about this film and greatly recommend it to anybody that likes though-provoking films.
5 people found this helpful

Jeffrey J.Reviewed in the United States on April 18, 2019
1.0 out of 5 stars
Bleak, disturbing, and disgusting
Verified purchase
Well, I guess the movie was well acted, but the story line was aweful (not poorly written, just a story that is disturbing and leaves no positive feelings at it's conclusion).
4 people found this helpful

TCReviewed in the United States on January 3, 2019
5.0 out of 5 stars
Jesus H. Christ...
Verified purchase
Well, that sure was not what I was expecting. Raw, brutal, honest, moving, horrifying.

As an aside, Yeoh is mesmerizing as always, but this film really just drives home how under-rated an actor Bean is. Guy is a stellar craftsman.
2 people found this helpful

whatithinkisReviewed in the United States on March 19, 2019
1.0 out of 5 stars
I decided to stop watching
Verified purchase
Because the film was slow and . . . bleak, I guess I'd call it. Then I read these other one star reviews and was SO glad I had.

If you're having misgivings, READ THESE REVIEWS. Trust your instincts.
2 people found this helpful

ardis S.Reviewed in the United States on October 16, 2014
4.0 out of 5 stars
Far Away
Verified purchase
Scenery fit the movie: hauntingly beautiful, bleak, and wild. I felt that once Loki(Sean) came on the scene, there would be trouble. I hate to say it, but from then on, it got predictable, and as in most of his movies, one of my favorite actors would die. Surprise! But I will not go into details, even about the two women who were excellent in their roles. The movie was not even humorous, in my opinion, but I give it four stars. I liked it, but didn't love it.
4 people found this helpful

lily t.Reviewed in the United States on October 26, 2013
3.0 out of 5 stars
Oni Baba of the North
Verified purchase
Ostensibly based on a very short story titled The True North ( you can google and read it on line) by Sara Maitland, this film is actually most reminiscent of the great Japanese film Oni Baba. Instead of the swaying grasslands in Japan during the civil wars of the 14th century, the setting is now somewhere on the Arctic tundra during an unnamed war, though Russian is spoken on the radio and by the villains that appear in the film. But like Oni Baba, here we have two women, an older and a younger, eking out a precarious and sometimes violent existence in an unforgiving time and place. One day when a man appears on the scene , here called Loki, [in Oni Baba a comrade of the younger woman's slain husband], only mayhem and tragedy can ensue. His preference for the younger over the older, more complex woman, coupled by the betrayal of the womens' partnership by the younger provokes a powerful response. The parallels remain right down to the disfiguring Noh Mask in Oni Baba and the last scene of Far North.

Perhaps I would have liked this movie better if I had never seen Oni Baba -but I have--and there is no comparison between the artistry and beauty of the haunting Japanese film and this rather nebulous one, which is only uplifted by the wonderful performance of Michelle Yeoh. Sadly the usually great Sean Bean and the very pretty younger woman have zero chemistry and it is difficult to believe he would have preferred her to Yeoh.

If you liked this movie, or even if you didn't , please see Oni Baba --Amazon carries it and it is mesmerizing- you can google for trailers. If you loved the Arctic setting, look for Atanarjuat,The Fast Runner, a masterpiece with an all Inuit cast based on Inuit legends. Both are far superior to Far North.
5 people found this helpful

L. MatthewsReviewed in the United States on June 24, 2017
4.0 out of 5 stars
Heavy ending that I almost couldn't handle.
Verified purchase
This is a pretty good movie, but NOT for the faint of heart. I won't spoil but if you are sensitive you may want to be cautious about this film. Yikes, I had nightmares!
4 people found this helpful
See all reviews
Back to top
Get to Know Us
Make Money with Us
Amazon Payment Products
Let Us Help You
EnglishChoose a language for shopping. United StatesChoose a country/region for shopping.
© 1996-2021, Amazon.com, Inc. or its affiliates