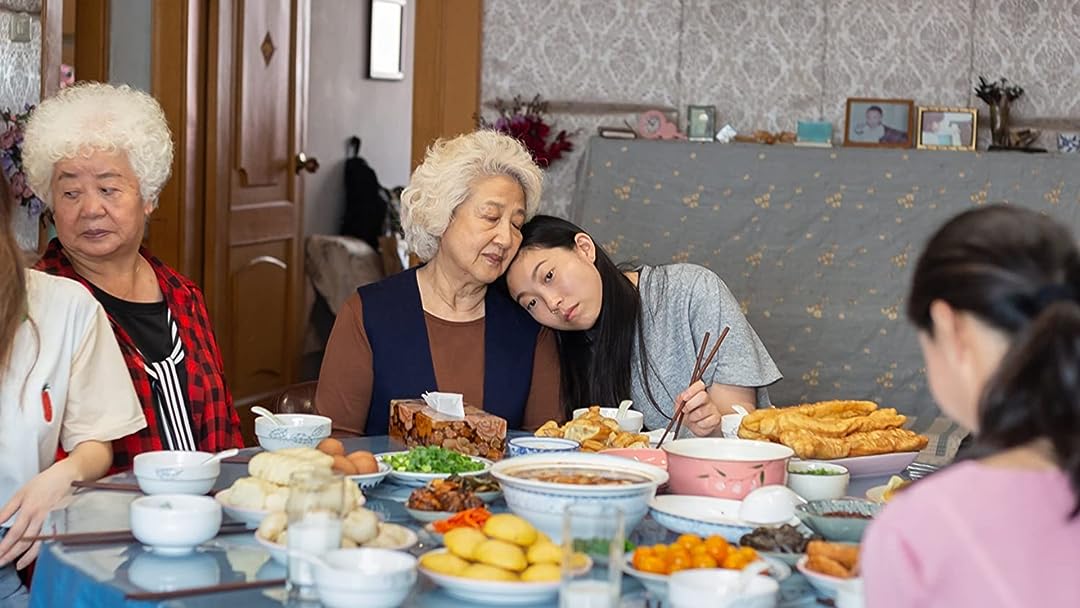 (4,286)
7.61 h 39 min2019X-Ray13+
In this funny, heartfelt story, Billi’s (Awkwafina) family returns to China under the guise of a fake wedding to stealthily say goodbye to their beloved matriarch—the only person that doesn’t know she only has a few weeks to live.

silent gReviewed in the United States on November 8, 2019
5.0 out of 5 stars
Lovely
Verified purchase
This film is about being an immigrant and dealing with loss. The protagonist is stuck between two different cultural ways of handling a terminal disease. Torn between the two and her love for her grandmother--who appears to also symbolize the warmth of a childhood that is now forever gone, Billi also realizes there is no way of going back, really. I am not Chinese, but this film resonates so much more than being a Chinese American and explores that in-betweenness, where one is forever stuck once one leaves a place to live in another. No trip back will be a real return because what is left behind is never the same.

The Farewell is a beautifully made film with a seemingly simple story. When it finishes, you may not think it hit you with a bang, but it does stay with you for a longtime and haunt you with its humaneness, little moments, and the phenomenal soundtrack that captures the affect of the film so well. The Farewell is an excellent example of how a story is told makes all the difference.

I saw some people marked the film as boring. If you are into fast-paced Hollywood films and need to be entertained at all times, yes this may not be the film for you. However, taste is socially constructed, and that judgment might say more about you than about the film.

The Farewell is a film made with much warmth, gentleness, and an excellent sense of humor. I highly recommend it.

AmyReviewed in the United States on November 4, 2019
5.0 out of 5 stars
The real ABC experience!
Verified purchase
The first movie I've seen that captures the experience of being an ABC, at least in many of the ways I have experienced growing us as a Chinese looking girl in America. The characters reminded me so much of my family and my visits to China in my Chinese as a second language.
83 people found this helpful

Aunt BethReviewed in the United States on November 17, 2019
4.0 out of 5 stars
Great story, terrible sub-titles!
Verified purchase
Read the other reviews for in-depth takes on the movie. I'm giving it 4 stars because I enjoyed the film, but got eye strain from trying to read the sub-titles. There is a lot of white type on white or light background that made some of the conversations impossible to follow.
56 people found this helpful

BearReviewed in the United States on December 14, 2019
5.0 out of 5 stars
Very moving beautiful film
Verified purchase
So few movies represent the Asian community. I am Jewish and Japanese through marriage. The two cultures have many similarities. One big exception is Jewish families talk about everything!! The Japanese side is very hush hush about everything. I adored this movie! Aqua Fina was phenomenal! A serious acting role not anything like her character in Rich Crazy Asians.
45 people found this helpful

GryphonisleReviewed in the United States on November 10, 2019
4.0 out of 5 stars
Warmly Humorous Film That Still Lacks Depth. Nothing Going On In The Background.
Verified purchase
Do they use out takes for trailers? I remember the hospital scene in the trailer playing as if they’re discussing Nai Nai’s cancer with the doctor, in English, the doc presuming she doesn’t speak the language, until Aqufina’s character points out Nai Nai studied in the US and does, yet in the movie it plays as if Nai Nai doesn’t speak English and so isn’t understanding the discussion, which of course does not deliver the joke as the scene in the trailer did.

The Farewell is a quietly funny film once again dealing with the differences arising from being domestic Chinese vs Chinese from abroad, in this case from the US. Here the differences arise mostly from Awkwafina’s character, who on learning that her grandmother has been diagnosed with cancer is also told that no one in the family wants her to go back as they all feel she’ll blow the secret. No one has told Nai Nai as is apparently Chinese custom; they feel the news of her mortality would unnecessarily burden her. Awkwafina shows up anyway, to everyone’s surprise and Nai Nai’s delight. A some have noted, she does seem to be a one tone character, with a stooped shoulder droopy face stance in most scenes. While she’s still the liveliest of the bunch, she’s not the wise cracking smart ass Awkwafina has made a name for. There’s also not a lot going on elsewhere in the family. Was it “Monsoon Wedding” where a similar international family gathering, in the Old Country, for a wedding (as is the stated premise here) that the audience not only moves towards the climatic moment but also learns some dramatic news about members of the family, from pedophilia to spousal abuse in the process? None of that here. It seems that the “happy couple” getting married aren’t all that happy to be getting hitched and even Nai Nai suspects something is off, yet we never go there. Even the end of the film is a bit of a wheeze. It seems as if the director was afraid to look behind closed doors and bring out the backstories that might have made this film meatier.

All in all entertaining, in a somber yet still humorous manner. But it the depth mortality should bring to such a film.
22 people found this helpful

M. LiebswagerReviewed in the United States on October 9, 2019
5.0 out of 5 stars
An interesting look at dealing with impending loss
Verified purchase
don't be a cinefile and just enjoy this unique, culturally lush story
28 people found this helpful

CChaunceyReviewed in the United States on December 1, 2019
3.0 out of 5 stars
Was expecting a lot more
Verified purchase
As an Asian person, I think the Asian cast and slightly exotic setting and circumstances helped this movie out a lot review wise, because it's really more of a Lifetime movie. Very one note. Except for a scene where she cries, it's just kind of a series of scenes where Awkwafina is trying to contain her emotions. "Should we tell her?" is discussed and explored on repeat. The performances are very cutesy and one note as well. Was expecting a lot more.
21 people found this helpful

DhamiltonReviewed in the United States on December 23, 2019
5.0 out of 5 stars
Great Movie!
Verified purchase
This movie asks us all to consider what is better-to always tell the truth and break a spirit, or tell a lie that keeps one strong. I loved this movie! I was able to consider a different way of being with family, information, and my role within my family. Aquafina was really great!
23 people found this helpful
See all reviews
Back to top
Get to Know Us
Make Money with Us
Amazon Payment Products
Let Us Help You
EnglishChoose a language for shopping. United StatesChoose a country/region for shopping.
© 1996-2022, Amazon.com, Inc. or its affiliates