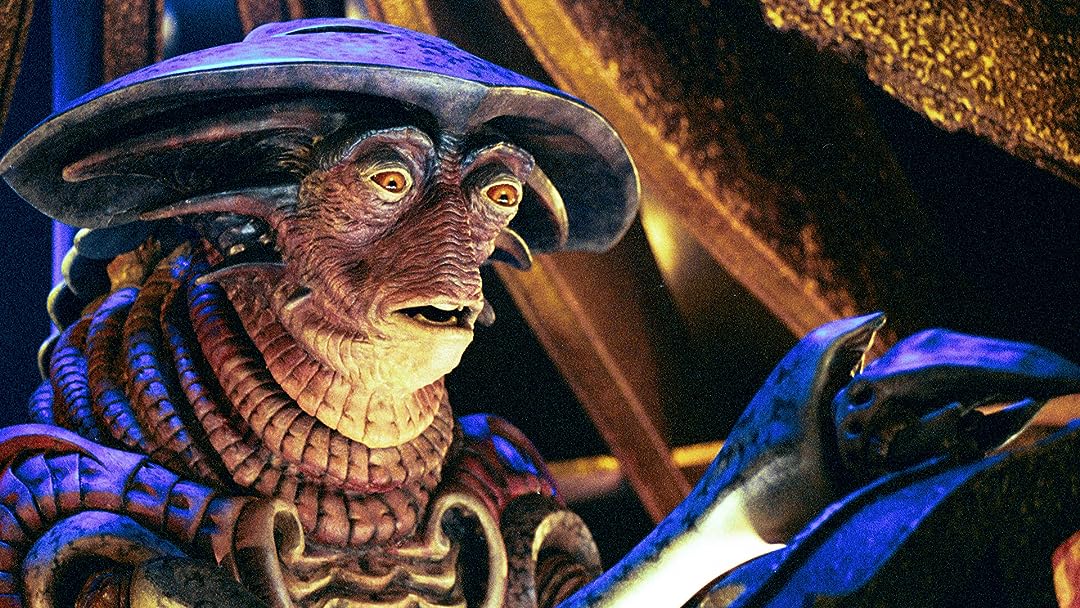 (368)
2000X-RayTV-14
Astronaut and astrophysicist John Crichton becomes stranded on the other side of the universe when his Farscape module goes through a wormhole. He is taken in by the misfit alien passengers of the sentient ship Moya, a spacecraft that happens to be on the run from the militaristic "Peacekeepers."

LeadránachReviewed in the United States on April 11, 2019
5.0 out of 5 stars
Season 1 Correct Viewing Order
While it is a great show, the first season flows much better in the order intended (the DVD order), rather than the streaming order (original broadcast order). The preferable order is:
Premiere
I, E.T.
Exodus from Genesis
Throne for a Loss
Back and Back and Back to the Future
Thank God It's Friday, Again
PK Tech Girl
That Old Black Magic
DNA Mad Scientist
They've Got a Secret
Till the Blood Runs Clear
Rhapsody in Blue
The Flax
Jeremiah Crichton
Durka Returns
A Human Reaction
Through the Looking Glass
A Bug's Life
Nerve (Part 1)
The Hidden Memory (Part 2)
Bone to Be Wild
Family Ties (Part 1)

Michael ManzellaReviewed in the United States on October 20, 2019
5.0 out of 5 stars
Still the greatest Sci-Fi anything of all time
As a lifelong Sci-Fi fan, Farscape is still my all time favorite series. Hands down. I started watching it in 2004 after it had already ended while in the midst of fan efforts to bring it back. Picking up in the middle of season 3, I was immediately drawn to the show (albeit a bit confused on the plot and why there seemed to be two Johns). As I finished through season 4 I simultaneously went back and watched from the beginning and... wow. It was the first time I experienced a connection with a show like that and, other than Fringe (my all-time number 2 series), has been the only time Thankfully I didn’t have to wait long between finishing the show and hearing that a mini-series would conclude the epic episode 88 cliffhanger.

After introducing the show to some friends in 2005 and loaning out my DVDs to others (never to see them again), I hadn’t thought much about Farscape until I discovered it was on Amazon this summer. I added it to my watchlist “just in case”. With the 20th anniversary of the premiere on the horizon, I decided to watch a few episodes last month. Before I knew it I was back into Farscape all over again. It’s the only thing I’m currently watching; everything else is on hold. I’m almost done with season 3 and very much looking forward to my favorite season: number 4. Although I know the main plot, it has been refreshing to watch it again almost 15 years later. I’m seeing things through a completely different lense.

Farscape is still the best Sci-Fi anything, and that’s coming from a lifelong Star Wars and Star Trek fan. The first two seasons are really good, but damn does the show hit its stride in season 3. The further you get, the better it gets. Claudia Black and Ben Browder are legit, they really make the show. The chemistry of their characters is, to me, the driving force. Browder’s performance as lead character is just awesome: he’s the heart of the show. But, Black’s Aeryn Sun is the soul. The show wouldn’t work without both of them. Character development overall is greater on Farscape than anything I’ve ever seen.

Farscape is the perfect balance of serious, funny, crazy, action, emotion, and tragedy. It is what it needs to be when it needs to be. Best of all, it ends with complete fan service to finish out the mini-series. Find me an epic Sci-Fi show that doesn’t end in a disappointing fashion! Farscape is an exception. Although you will be taken to the brink of feeling, in the end it all works out because the show runners get it. If you’ve never seen Farscape, or even if you have, treat yourself to Amazon’s offering.
45 people found this helpful

AstroNerdBoyReviewed in the United States on July 16, 2001
5.0 out of 5 stars
Go Ahead and Take the Risk
Verified purchase
As I write this, Farscape is well into its 3rd season. I have known about the existance of Farscape from its beginnings. However I never bothered to watch the show because it looked so weird. Knowing that "muppets" (I tease as the show is produced by Jim Henson Entertainment) played two of the characters didn't help. But with everything else in reruns and SciFi showing new episodes, I thought, "What the heck." So I watched an episode and was surprised at how quickly I was absorbed into the show despite knowing almost nothing about it. Five episodes later I can say I am hooked and have purchased "Farscape - Collection 1".
Three tapes come in this box-set and each tape contains 2 epidsodes. These are shown in order.
Tape 1: "Premiere" & "I, E.T." Tape 2: "Exodus From Genesis" & "Throne For A Loss" Tape 3: "Back and Back and Back to the Future" & "Thank God It's Friday, Again"
Overall, not to shabby for the first-six episodes!
74 people found this helpful

AtariMethodReviewed in the United States on March 21, 2019
5.0 out of 5 stars
I always loved this show.
I cannot think of an episode of Farscape that I didn't like. Amazon - seriously - sci-fi fans around the world would lose their minds if you picked this show back up and brought it back to life. If it can be done with Star Trek it can be done with Farscape.
39 people found this helpful

David L. BurkheadReviewed in the United States on December 11, 2020
5.0 out of 5 stars
A show that will break your heart, in a good way.
Science fiction allows us to explore ideas, to see different worlds, civilizations that never existed, and contemplate how the world might be different with a different set of operating instructions. And to some extent Farscape does that. But what Farscape does with that is focus down with laser-like intensity on the individuals characters and their reactions and their <I>feelings</i>. That's going to be a part, a big part, of any <i>good</i> science fiction. In Farscape, however, it's the center piece. For that reason, Farscape can break your heart in a way that few SF TV shows or movies ever manage. The closest I've seen is a few episodes of Babylon 5, chiefly Marcus' sacrifice and the series finale. In Farscape, those gut-punches are practically routine. And that makes it <i>personal</i> like no other series I've seen, and why I consider Farscape in the top three SF shows of all time, and possibly the top 10 TV shows of any genre period.
15 people found this helpful

MossyfrogReviewed in the United States on December 1, 2020
3.0 out of 5 stars
Really wanted to like
I really, really wanted to like this show. And I do love most. But the Critchton character really annoys me to no end. The actor is really a bad actor who over acts every scene he has. Ya I get it, he play's someone who is tossed way beyond what he knows and he's some sort of person who takes things irreverently. But after season 2 I'm rather sick of him. Once in awhile, fine. But every scene, sometimes too much is just that, to much. The other reason I'm getting tired of this show is some of the characters....the "warrior" guy. Just does not think. Being a warrior is more then just charging head on into danger. And he seems to do that constantly. Never thinking it though. Shooting up anything that moves when perhaps talking or figuring out just what that glow y thing is might solve the whole dang issue right off. So the over hyped aggressiveness of all the characters, plus their instant willingness to betray one another is tiring and spoiling this show for me. But then I'm in middle of season 2 so maybe some of this will work it's self out (hopefully they get rid of Critchen though).
7 people found this helpful

M. JohnsonReviewed in the United States on March 25, 2019
5.0 out of 5 stars
Amazing Characters
I originally saw a trailer for Farscape on The WB (now know as The CW) channel. It piqued my interest so much that I subscribed to the Sci Fi (now Sy Fy) Channel. (This was back in the day when I had a satellite dish and subscribed to individual channels). I loved the show from the first episode. Of course some episodes were better than others, but the show as a whole is amazing. Other shows I find amazing...Supernatural...The X-Files...Buffy the Vampire Slayer...The Walking Dead. All of these are character driven shows.

John Crichton is someone that everyone can relate to. He isn't a war hero. He isn't a romantic hero. He isn't a tragic hero. He isn't a hero at all. He is simply a good guy caught in some extreme circumstances. His humor and ability to take things as they come make him someone you could see yourself having a drink with on a Friday night. His emotions are your emotions. Ben Browder portrays Crichton so very well that you can feel what Crichton feels. A protagonist who you can relate to is what makes this show work.

Claudia Black does an incredible job as Aeryn Sun. The relationship between John and Aeryn gives me as many "feels" as the relationship between Mulder and Scully. She begins the show as the no nonsense "Peacekeeper Barbie." Her initial inability to process change and embrace her feelings is something we have all struggled with. He transformation from a Peacekeeper into a woman is at times painful, but it is an incredible journey.
16 people found this helpful

ShaneReviewed in the United States on April 8, 2019
1.0 out of 5 stars
Did you love The Muppet Show? Now you can watch The Muppets Show in space.
I tried watching this. I gave it a 1/2 hour and shut it off. I don't mind puppetry in film. I mean we all know a Facehugger is really a puppet after we're done with the movie. BUT THIS! It just looks like Jim Henson doing science fiction. Those stupid looking puppets take me out of the visual story telling and all I can think of is that I am watching a puppet and I am not supposed to think I am watching a puppet. So I shut it off,
17 people found this helpful
See all reviews
Back to top
Get to Know Us
Make Money with Us
Amazon Payment Products
Let Us Help You
EnglishChoose a language for shopping. United StatesChoose a country/region for shopping.
© 1996-2022, Amazon.com, Inc. or its affiliates