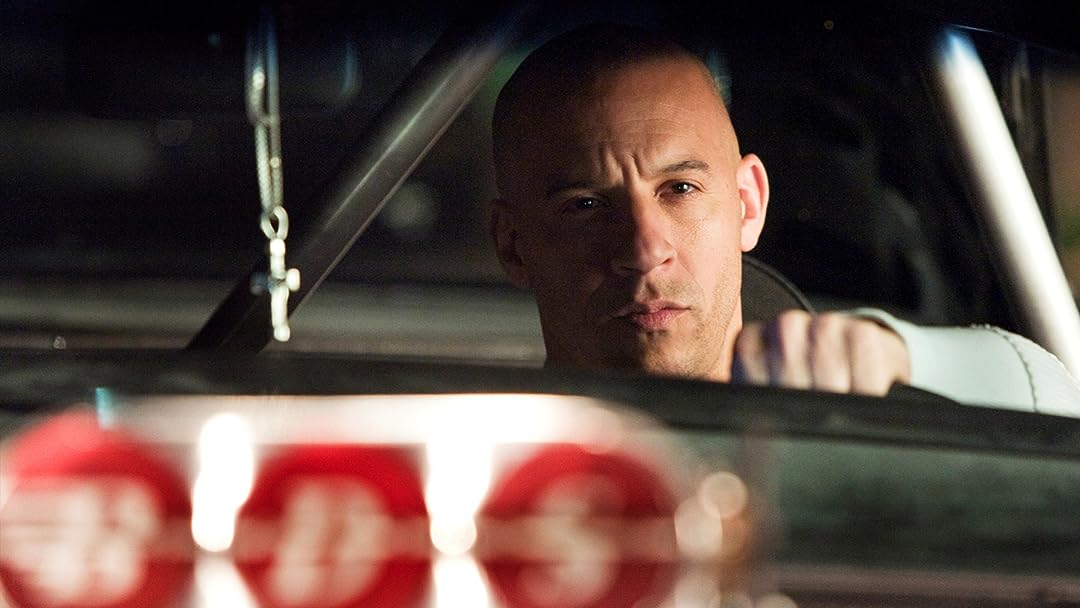 Save with with the Fast and Furious movie collection on Prime Video shop now.

joel wingReviewed in the United States on April 2, 2021
3.0 out of 5 stars
Fast & Furious had become a formula by now but it still worked
Verified purchase
The Fast and Furious series had become a formula by this time. Paul Walker was still a cop and Vin Diesel the outlaw and yet they worked together. That meant they drove supped up cars, hit nitrous buttons, and were involved in a lot of chases to bring down the bad guy, this time a drug lord played by John Ortiz. What was different was this was the first in the franchise that featured all the main cast members Diesel, Walker, Michelle Rodriguez, Jordana Brewster, Gal Gadot, and Sung Kang. If you enjoy the franchise you’ll enjoy this fourth movie. It’s nothing new but it’s still fun.
3 people found this helpful

Sheshe30Reviewed in the United States on October 30, 2015
5.0 out of 5 stars
great for its time back in 2009
Verified purchase
At the time of its release back in 2009 Fast and Furious was the best movie of the series. The crew was back together. The movie was very exciting. It dazzled, it sparkled, it wowed. There are scenes that made you jump out of your seat or kept you on edge. The whole franchise was revamped to create more movies to follow. I truly enjoyed this movie when it was first released. I can also say that with each release the series got better, became more dangerous, pushed the envelope. I really love the action in this film even if there was too much fantasy car chasing. I feel at some point they should hold a little something back to save the franchise. At some point there is no more wow factor and the audience would get a little tired of the impossible car chases it would have been a lot better with something more realistic. I still enjoyed it as a comeback movie.
7 people found this helpful

afish73Reviewed in the United States on February 9, 2020
5.0 out of 5 stars
Easily influenced
Verified purchase
Okay, so I track my gas mileage in my car. I’ve got a Dodge Charger, not a high end one by any means but it’s fun to drive. The app I use to track fill ups at the gas station generates a graph of fuel efficiency over time, and I was perplexed when I noticed that a few months ago my average mpg dropped significantly for about a 3 week duration. After thinking about for a while, I remembered what happened at the beginning of that time period: I binged the fast and furious movies for the first time.
If you too are embarking on the adventure of watching this movie series... be careful.
2 people found this helpful

Tick HaterReviewed in the United States on May 8, 2020
5.0 out of 5 stars
It’s Fast&Furious...of course it’s action packed
Verified purchase
This was like the previous films in the series, action packed and I enjoyed it along side my wife...the ladies like the main characters and have a ❤️ of compassion for the loss of Paul Walker...Rest In Peace. Fast & Furious always delivers entertainment. We are missing the roll out of the next film do to inability for people to earn $ and visit movie 🍿 theaters! Wait another year!? for rollout of film 🎞 on screen 🎥.....We all have to work together so we all can get back to work and watch the next Fast&Furious Film!!! Get back to work America, we miss you 😘

Innes B. StroudReviewed in the United States on January 21, 2011
4.0 out of 5 stars
"Just Like Old Times" is the correct word.
Verified purchase
It was really wonderful to see the original actors back in their rolls I disagree with some who will argue that "the cars are the real stars" not if you don't have good actors or lack for a better word the orginal actors reprising their rolls to go with the "Star cars."

To start off we see that Dom and Letty made it to Mexico, only to run from the law again and end up in the Dominigan Republic pulling the same heist except this time it's gasoline, the law is closing in on them again and Letty is murdered by a ruthless drug lord named "Braga".

The little problem I had with some of the plots is what ever happened to Dom's original crew ??? Leon, Vince, and Jesse [which everyone knows that Jesse died in the first film in a drive by shoot out by Dom's rival Johnny Tran.] it was never explained in the film of what became of the other two or why Justin Lin didn't decide to bring back Johnny Strong and Matt Schulze.

Then we see Brian O'Connor [the Buster gearhead undercover cop turned rogue now an FBI agent] on the trail for the same man.

The film get's even more interesting when Dom and Brian cross each others paths once again, but this time the reunion isn't so subtle like in the first film.

Mia is back and the moment she is taken into custody guess who comes to save her ? you guessed it her ex-lover Brian. I could go on and on about the plots and twist but the bottom line is this.., it is great to see the original cast again reprising their rolls all matured and seasoned drivers had Justin Lin bothered to do his homework instead of rushing off to do "Tokyo Drift" with an entirely new cast he probably would've come out as a winner, but all and all
this lastest intallment was not perfect but it was alright in my book that is why I gave it four stars.

Jon R. PatrickReviewed in the United States on October 15, 2019
4.0 out of 5 stars
The start of the second series
Verified purchase
I live the Fast and Furious movies.
Seriously... I wish I was a cool as they were.
The first was great, the second great, and Tokyo Drift (while widely panned) was excellent.
But this 4th movie was amazing and the start of the next chapter in the F&F franchise.
After this, they become more 'heist' movies, and built from strength to strength.
Highly recommended for fans!
One person found this helpful

Marc. R.Reviewed in the United States on September 13, 2009
5.0 out of 5 stars
4 The fast and Furious Fans
Verified purchase
The fast and the Furious 1, opened an all new gender in Sport Cars movies, hitting right where it's supposed to..

The fourth "official" sequel (It's really the 2.5 Fast And Furious Film, with in the time frame) is really exhilarating and regardless of the "SUPER FANTASTIC ACTION" performed as Dom and Letty escape from a rolling, flaming gas tank heading towards them and the video game sequence inside the maze of tunnels between the border of US and Mexico.

The movie really got back to the roots and stuck to the formula that gave them the success on the first movie.

Being Latin I deeply respect the different scenes from Latin America that are showed in this movie and they truly give the Latin tunning the place of respect they deserve for spooling the super tunning to another level with the different types of modifications made to the cars.

The trama of the 4th version of the saga is really intense and gives you the tunning world perspective and the real logical and well thought concept that makes the movie very interesting to car fans and movie fans and non fans as well.

My personal rating for the 4thlogy is:

Hope the review helped you make up your mind. (I always read reviews before buying at Amazon)
One person found this helpful

GriegerReviewed in the United States on August 27, 2009
3.0 out of 5 stars
Not as good as the first, but better than the others
Verified purchase
While I liked the original crew from the first movie and a lot of the action, something about this fourth entry in the series makes me want to watch the first one instead.

After all, you can't say it's because the actors were different...or the director...or the locale...or the cars...pretty much the same thing going on here. Maybe it's a sign that cookie-cutter movie making isn't entertainment or at least it's not something that'll excite you as much as the racing usually does.

The second movie was ridiculously asinine. The third (Tokyo Drift) was definitely fun though that was largely because the drifting was crazy. But, in the end, the first movie had all sorts of things going for it.

Now, that doesn't mean you won't get something out of this movie. I'm saying you need to decide where your loyalties are. If you loved the first movie more than the last two, then you're safe...buy it and enjoy. If you liked the other two as well, then coming back to this one might not be the homecoming you're expecting. Still, something relatively new and in the F&F universe is better than nothing at all.
6 people found this helpful
See all reviews
Back to top
Get to Know Us
Make Money with Us
Amazon Payment Products
Let Us Help You
EnglishChoose a language for shopping. United StatesChoose a country/region for shopping.
© 1996-2021, Amazon.com, Inc. or its affiliates