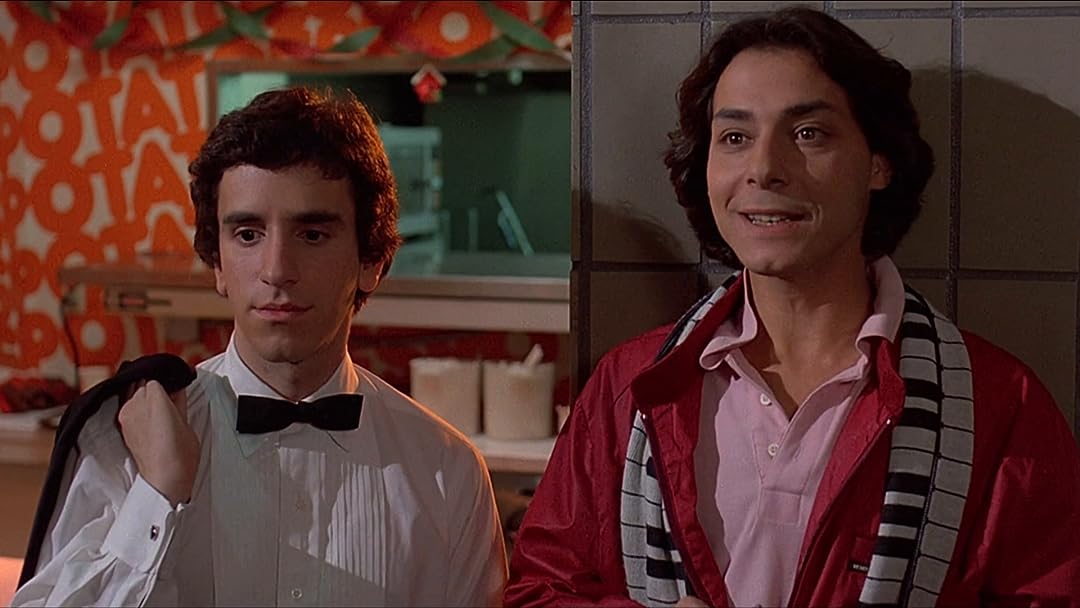 joel wingReviewed in the United States on May 6, 2020
4.0 out of 5 stars
Shaped a whole generations view of life in high school during 80s
Verified purchase
What Animal House did for college life Fast Times at Ridgemont High did for high school meaning people watched both and wanted to emulate what they saw. I can remember when Fast Times came out people were talking like Jeff Spicoli (Sean Penn) the entire summer. The film follows several high school students. Spicoli is the pot head. Stacy Hamilton (Jennifer Jason Leigh) is the young virgin. Linda Barrett (Phoebe Cates) is the senior who thinks she knows everything including about sex. Mark Ratner (Brian Backer) is the average kid who gets ignored in the crowd. Brad Hamilton (Judge Reinhold) is the senior who thinks he has everything figured out. Finally, Mike Damone (Robert Romanus) scalps concert tickets. Each one is trying to find their place in the high school setting.

Like most high school students the main topic of discussion amongst the characters is sex. Stacy for instance thinks that sex is all relationships are about. Her friend Linda gives her nothing but bad advice on the matter leading to a number of bad decisions. Like many teens Linda exaggerates how much she knows and her own experiences.

The other part of the movie focuses upon the day to day lives of teenagers. Going to class obviously is one thing and there are a series of hilarious scenes with Spicoli and his History teacher Mr. Hand (Ray Walston). Working crummy service jobs like fast food restaurants.

Like Animal House, Fast Times captured the imaginations of thousands of young people when it came out and it's still a fun watch today.
C

David, KansasReviewed in the United States on October 25, 2017
5.0 out of 5 stars
Fast Times: Learn It. Know It. Live It!
Verified purchase
I didn't watch this movie until I happened across it one morning on HBO. I have been kicking myself ever since for not checking it out much, much sooner! It is a laugh riot, especially Spicoli's interactions with Mr. Hand and his dream sequence with Stu Nahan (who also played himself in the Rocky movies) where he becomes a world champion surfer.

The scene where Stacy Hamilton has to consider the abortion due to the carelessness of Mike Damone to use protection is tender and handled very delicately by Cameron Crowe and Amy Heckerling. I also cheered when Stacy chose Mark (Rat) over Damone. She was too good fro Damone.

If you don't have a deep appreciation for the talent of Jennifer Jason Leigh, Sean Penn and Judge Reinhold after watching Fast Times, then watch it again! I was not old enough to enjoy it in 1982. I should have been enjoying it a lot sooner than 2017, though.
30 people found this helpful

Brian HartigReviewed in the United States on April 22, 2019
4.0 out of 5 stars
Not the Same Version
Verified purchase
I got the "add-on" & this isn't the same version I saw when it came out or the one that's been on TV many times since. At first I thought maybe it was just my memory playing tricks but everyone I've had watch it says the same thing. Scenes that we clearly remember are cut short or changed. It was still a funny movie but the changes are no where as fun as the original takes.
15 people found this helpful

Erica MichelleReviewed in the United States on September 15, 2021
3.0 out of 5 stars
Highly Edited Version
Verified purchase
This version is missing so many scenes from what I remember seeing back in the day. The guitar pick scene with Spicolli and his friends; the empty mall scene with Linda and Stacy and the “mini pill” girl; first day of school when Brad and his friends tease Stacy; lunchtime scene with Brad and his friends; another lunchtime scene where Linda introduces Stacy to the annoying cheerleader and her boyfriend; scene where Linda and Stacy see the stereo salesman’s car in the mall garage; scene when Linda warns Stacy about her date with Rat; Stacy crying to Linda about her pregnancy; some parts are missing from the scene at the clinic; scene where Brad meets with a guidance counselor…You get the point and I’m sure I’m missing some.
This version will get you by in a nostalgic pinch, but if you’re a super fan (like I am) you’ll be left questioning…”Hey, wasn’t there a scene where…”
5 people found this helpful

AdamReviewed in the United States on September 14, 2021
5.0 out of 5 stars
A timeless classic of high school challenges.
Verified purchase
Totally Man! Like far Out. This movie nailed it. the hijinks, the sex, the stupidity of fast food restaurant managers, the crudeness and hardness of the the presumed alpha stud as so aptly portraited in the Damon character. Fast Times at Ridgemont High. Just thinking about the film now makes me relive my High School days all over again. This movie was to High School students of the 80's what Dazed and Confused was to High School students of the 70's. This hilarious comedy about the lives of students from every walk of life during a typical 80's High School year is a MUST have part of any film lovers collection. I saw this film when it was first released in 1982, and it is still as funny now as it was then. In fact, I refuse to watch this movie on TV, all hacked to bits. I will only watch it in it's true rated R form, which is why it is really unsuitable for children below the High School age to watch. I believe this movie captured some of the true essence of what it was like to grow up during that era. If anyone wanted to know what it was really like to grow up and go to school in the 80's, then Fast Times at Ridgemont High is the perfect film to suggest, despite the fact that some parents would, of course, deny some of the activities that are portrayed in the movie... no doubt to relieve themselves of some deeply hidden guilty pleasures. Watch this movie!!!
One person found this helpful

TDAWG107Reviewed in the United States on January 13, 2022
3.0 out of 5 stars
Good...but it's no American Graffiti.
Verified purchase
The movie "Fast Times at Ridgemont High" is a good movie don't get me wrong. But as far as high school coming of age dramas/comedies go it is no "American Graffiti'. Although George Lucas did set the bar pretty high with that film. It's not even as good as another film it often gets compared to "Dazed and Confused". It is funny at times and the actors are good, but it feels very dated (much like Saturday Night Fever) and self indulgent as many movies written by Cameron Crowe seem to be. Probably the worst part of the movie is having to listen to Jackson Browne's song 'Somebody's Baby' over and over again. And the constant solo songs by members of the Eagles is enough to make anyone puke. You would think a film about teenage life would include a more diverse soundtrack, especially when music is such a big part of growing up. Overall I would give the movie a 6 out of 10 just for the good performances by the actors. But it's a movie that unless you grew up loving it you probably won't watch it more than once.

Greg MReviewed in the United States on February 28, 2021
2.0 out of 5 stars
Fast times at ridgemont high dvd - region 4
Verified purchase
I cannot give five stars ONLY because the purchase I made was for a region 4 dvd of which I’m in the United States and own a DVD player that plays only region 1 dvds . Upon loading and playing the dvd , it started and played just fine . The problem is that a region 4 video is produced in a foreign language and will not format to a region player . I had to return it and will make the purchase at a later time of a region 1 edition of this movie . Absolutely no harsh words for the seller as I did not ask was this video useable in region 1 and maybe I should have either read the description better but did not see any indication as to region description and possible did not understand how the wording applies to whom the video is for and what region . Will not fault the seller for something I should have researched better or at least asked . I’m sure that someone who purchases this video or any from this seller meant for region 4 , in a region 4 country will be happy . I will say the picture looked just fine . In closing , I just want to say that when purchasing a dvd , don’t make the mistake I did , make certain it is correct for your region and your player . Always ask a question if your not sure .
One person found this helpful

hippiechicReviewed in the United States on September 3, 2021
5.0 out of 5 stars
Quintessential 80's movie
Verified purchase
This is basically everything the 80's were about and I Loved that era . This movie does have some hard situations the teenagers deal with but to see them process what they went through and learned about themselves... made this movie exactly what the 80's stood for . I have lost count of how many times I have seen this movie but I will still "probably" watch it once a year . The music during this movie is another reason I still keep watching.... the 80's music was a time when most of the Best music was around .
One person found this helpful
See all reviews
Back to top
Get to Know Us
Make Money with Us
Amazon Payment Products
Let Us Help You
EnglishChoose a language for shopping. United StatesChoose a country/region for shopping.
© 1996-2022, Amazon.com, Inc. or its affiliates