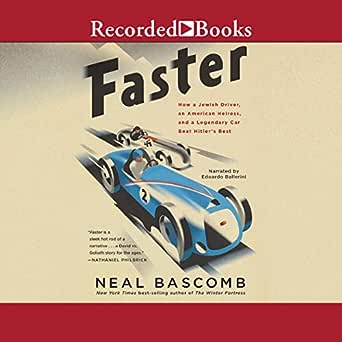 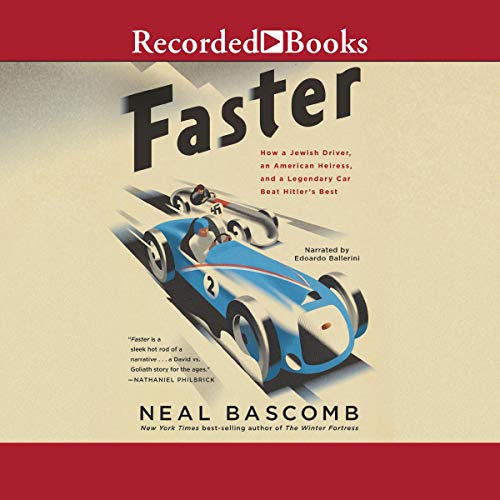 Faster: How a Jewish Driver, an American Heiress, and a Legendary Car Beat Hitler's Best

4.7 out of 5 stars
4.7 out of 5
74 customer ratings
How does Amazon calculate star ratings?
Amazon calculates a product’s star ratings based on a machine learned model instead of a raw data average. The model takes into account factors including the age of a rating, whether the ratings are from verified purchasers, and factors that establish reviewer trustworthiness.

Gary Kastal
5.0 out of 5 stars Fantastic Story
Reviewed in the United States on March 30, 2020
Verified Purchase
Neal Bascomb has written some great books such as “Higher” and “The Winter Fortress” but “Faster” in my opinion captures the best of the previous titles referenced with additional narrative nuances such as anecdotal details, the use of setting to capture the drama and spirit of Grand Prix auto racing, and historical context of the times juxtaposed with the historical context of European auto racing in the 1930’s, making this Bascomb’s best to date. Well researched with great bios of the drivers makes this a fantastic read!!

This book is more than a book about auto racing... It is a book that focuses of the spirit, determination, endeavor and hubris of humanity.

Candy J. Rodriguez
5.0 out of 5 stars A Gem
Reviewed in the United States on May 31, 2020
Verified Purchase
After reading initial reviews, I was expecting a good book when I ordered this one. What I got was a gem that shines out among books about racing history and social history as well. I have been involved in auto racing my entire life and am a perpetual student of the history of all things racing. This book combines fascinating biographies of racers, designers, engineers, manufacturers and sponsors from The United States to the European continent and beyond. It all takes place during the 1930's as Hitler's Third Reich arose and engulfed so much of the culture in its geographic sphere. The framework of Bascomb's articulate and fascinating book is the Grand Prix racing circuit that was largely dominated by Hitler's pet automakers, Mercedes and Auto Union, with their exquisitely engineered performance demons, the Silver Arrows, piloted by the most talented and successful drivers of the day. Challenging this automotive powerhouse was American heiress Lucy Schell (a successful rally racer in her own right), her French race cars made by underdog Dellahaye and obscure driver Rene Dreyfus, a Jewish ace rejected by the Reich machine. Events culminate in a showdown at a wartime Grand Prix wherein Dreyfuss and the Schell team beat the Germans in a highly contentious setting. I especially liked Bascomb's portrayals of other drivers involved in the Grand Prix arena, including the Reich drivers who were not competing for the greater glory of the Reich as was expected by Hitler, but rather competing for the love of the sport. Anyone would enjoy this book, do not make the mistake of passing it thinking it is only about racing !
Read more
4 people found this helpful
Helpful
Comment Report abuse

Amazon Customer
5.0 out of 5 stars A great read for the history of early Grand Prix racing and Europe between the wars.
Reviewed in the United States on April 19, 2020
Verified Purchase
Thought the lens of Grand Prix racing, we see the seeds of WWII. This was a very unique perspective. Bascomb captures the comradie of the diverse racers giving way to the nationalism and racism building in 1930s Europe. The period and history telling will satisfy the history buffs, but hold on to you seats, Bascomb can tell a race story that gets you heart rate up! With enthusiasm, I recommend this book.
Read more
5 people found this helpful
Helpful
Comment Report abuse

Gerald W. Arcuri
3.0 out of 5 stars Workmanlike Writing
Reviewed in the United States on May 2, 2020
Verified Purchase
This is a good story, told in a workmanlike manner. No more, no less. I found the climax to the book a little "anti-climactic, however. The racing scenes are nicely described, though I did spot what I believed were a couple of minor technical errors. Unlike a lot of automobile racing tales, this one does a very good job of fleshing-out the personalities of the main characters without making caricatures of them.
Read more
4 people found this helpful
Helpful
Comment Report abuse

Stephan Wilkinson
5.0 out of 5 stars Rene Dreyfus: a remarkable man
Reviewed in the United States on June 12, 2020
Verified Purchase
I knew Rene Dreyfus. But don't be impressed. So did every other amateur and professional racer and serious automotive enthusiast who lived within a hundred miles of his Manhattan restaurant, Le Chanteclair. He remembered us all and greeted us not lavishly but kindly--always a welcome that made one feel just a bit special.

Neal Bascomb's book fills in all the details Dreyfus's life of which I was unaware, and it does it in an immensely readable and well-researched way. Not only is the writing wonderfully accessible to readers who might not be motorheads, this is a book that should go on the most accessible shelf of any automotive enthusiast's library.

Helena Montana
5.0 out of 5 stars Story from the golden age of motor racing
Reviewed in the United States on April 21, 2020
Verified Purchase
This is a very well written story about a series of races that occurred between the Mercedes Benz racing team and the French Delahaye racing team; before the start of World War 2 stopped racing in Europe. Despite being one of the smallest teams in Europe at the time; the French car defeated the Mercedes car several times and outraged Hitler in the process. This the story of how this happened.
Read more
2 people found this helpful
Helpful
Comment Report abuse

Matthew Crawford
5.0 out of 5 stars Interesting read
Reviewed in the United States on April 19, 2020
Verified Purchase
WWII is a time rich in fantastic stories and Bascomb is no stranger to it. Delivering yet again Bascomb writes this great story about racing in the time right at Germany and Hitler's rise to power. A story about racing during the WWII era, what else do you need to know. Read and enjoy.
Read more
2 people found this helpful
Helpful
Comment Report abuse

Greg Flanagan
5.0 out of 5 stars What a Ride!!?? The most interesting, exceptional 2 people you’ve never never heard of!
Reviewed in the United States on June 2, 2020
Verified Purchase
The best automotive racing story you’ve never heard. Bascomb’s research and attention to detail are second to none. Fascinating to learn about German auto manufacturing dominance supported by Hitler and the lineage of most other European auto brands and their governments trying keep pace in the ‘20’s and 30’s. And Bascomb cleverly folds the story into the landscape of what was happening in Europe leading up to WWII; something the author is extremely well-versed in (reference his other works). Bascomb really has a gift for helping you understand the main character subjects-what drives them. Even the epilogue is riveting and could easily be the start of 2 subsequent books. Great read!!!
Read more
One person found this helpful
Helpful
Comment Report abuse
See all reviews from the United States