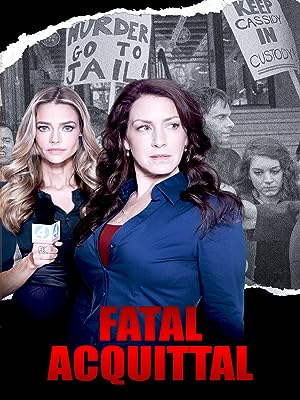 (10)
4.61 h 25 min2013NR
A woman accused of murdering her husband is found innocent, only to be terrorized by the real killer once she is set free.

TomikaReviewed in the United States on June 26, 2015
4.0 out of 5 stars
Four Stars
Verified purchase
Great movie!

Camille GuruleReviewed in the United States on January 16, 2017
4.0 out of 5 stars
Four Stars
Verified purchase
This was a good movie!

James N SimpsonReviewed in the United States on August 18, 2017
4.0 out of 5 stars
Predictable But Plenty of Recognisable Faces For a Made Originally For TV Movie
Fatal Acquittal is a made originally for TV movie (first aired 2014), so does suffer from the usual very predictable factor. It does have a wider range of recognisable faces though than your usual TV movie. You've got Denise Richards as a reporter without morals, who just wants to air anything that will get her into the bigger network markets. Patrick Muldoon you'll recognise as the guy who kind of looks like Rob Lowe plays the brother of a woman who is on trial for the murder of her husband, who is also looking after their daughter (Tabitha Morella who you might recognise from one off episodes of TV shows like The Middle, Victorious, How to Get Away With Murder). The trial of the mother/wife (Joely Fisher - Desperate Housewives, Wild Card) is a parallel of the OJ Simpson trial. She's a rich woman, everyone believes she did it (even her daughter, the film starts off with a dream by the daughter of a vision of her mother murdering her father), the public expect a guilty verdict, they believe she murdered her husband when she caught him cheating on her. But the jury aren't 100% convinced so she walks free. No one except her brother wants her to return to her former life in their neighbourhood and even the detective in charge of her husband's case make it difficult for her. Her daughter refuses to move out of her uncle's house. But the mother is determined to get her daughter back, but is encountering vandalism to her home and intruders inside. Is she really guilty or is someone else responsible for her husband's murder?

There's some ridiculous stuff like as if police actually turn up to someone's house if a neighbour complains their lights are too bright. A 911 operator just stops talking when the caller hasn't hung up. A detective responds to a 911 call for an intruder, surely a patrol car would be quicker. You can apparently just enter a number plate into a search engine and learn everything about a person. As I said it's very predictable, but if that doesn't bother you, the journey to the predictable outcome isn't a bad one.

BluehowlerReviewed in the United States on August 18, 2014
1.0 out of 5 stars
No Surprises
Pretty much what you would expect, no surprises, and you know who the killer is in the first 10 minutes.
Lame.
2 people found this helpful

AmazonfanaticReviewed in the United States on September 23, 2014
5.0 out of 5 stars
Pretty Good
I watched this on tv once and it was pretty good, this woman was framed for murder, she was found not guilty but merely everyone still thinks she did it, even her own daughter. Next she starts getting threats from the real killer and at the end it turns out her brother did it. I so recommend this to any lifetime fan.
5 people found this helpful

Amazon CustomerReviewed in the United States on December 24, 2015
5.0 out of 5 stars
Five Stars
Great movie to me! Definitely was not expecting the brother!
-Alesha M.
2 people found this helpful
See all reviews
Back to top
Get to Know Us
Make Money with Us
Amazon Payment Products
Let Us Help You
EnglishChoose a language for shopping. United StatesChoose a country/region for shopping.
© 1996-2022, Amazon.com, Inc. or its affiliates