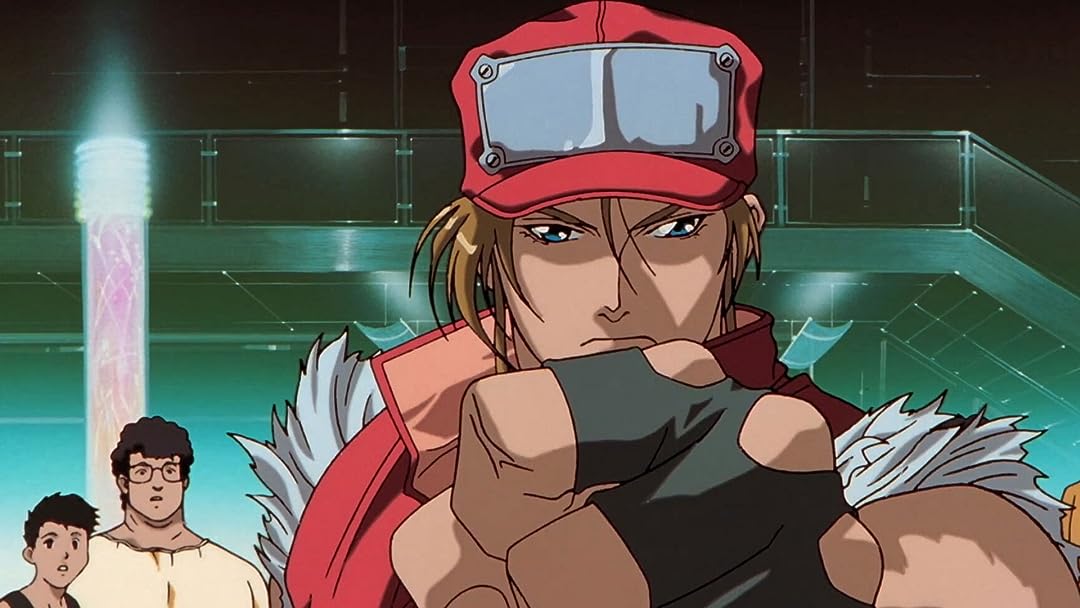 (26)
6.21 h 39 min199213+
Jeff Bogard was a master of the Hakkyokuseiken martial arts school and the guardian of its secret techniques. Coveting this knowledge, Geese Howard, the most powerful man in South Town, challenged and murdered him in front of his adoptive sons Terry and Andy Bogard.

Kevin WinslowReviewed in the United States on October 24, 2021
2.0 out of 5 stars
Nostalgia can't make up for poor quality.
Verified purchase
I loved this movie as a kid; that said, it hasn't aged well. Despite the label, description for the film, this is actually Fatal Fury: The Motion Picture. On the plus side, it's the third and final part of a story that began with the OVA's of Fatal Fury and Fatal Fury 2; this helps explain why Joe Higashi is just coming back after a 10 month layoff from the ring and speaks to why Terry Bogard is famous for defeating Geese Howard and Wolfgang Krauser, (the two villains from the previous video films.) But it's a pretty poor cap for the series. The writing is pretty terrible, the plot moves in fits and starts, with long periods of nothing really happening or lots of exposition, and then bizarre finales for certain characters and threads that come swiftly and without a satisfying resolution.

As for not aging well, it suffers from very uneven animation; some of the battles look absolutely terrible, while a few of the scenes are animated spectacularly; sadly, it's more on the side of poorly animated than well done. The finale is very cliche and poorly written: you'll know the ending way before it arrives, and likely will complain about the plot-demanded heel-face-turns of particular characters who seem to make decisions based on what is convenient to the writers in the moment rather than what actually would be consistent with what has come thus far.

Overall, I give it two stars: there are a couple of really well done action scenes that stuck with me even a few decades after watching this as a kid. It's not a great adaption of Fatal Fury, (the best was probably Fatal Fury 2, which actually felt very cinematic), but Fatal Fury: The Motion Picture at least attempts to elevate itself out of its roots and into cinema... it just doesn't do it very well. If you like Fatal Fury, anime, or late 80's/Early 90's action films, you might enjoy this a bit for what it is.

TravisReviewed in the United States on September 9, 2021
1.0 out of 5 stars
Nothing But a Power Fantasy
Verified purchase
The plot is cliched and predictable, the animation is jerky and lazy, the characters are flat and the story is shallow and lacking any significant meaning. The creators seem to think that they can coast by on nothing but almost naked girls and repetitive fighting.
One person found this helpful

NomDePlumReviewed in the United States on October 25, 2021
5.0 out of 5 stars
It's an anime about an arcade fighter
Verified purchase
I didn't watch this movie expecting a ground-breaking plot, or world-class writing. I expected a cheesey beatemup featuring characters from a beloved game franchise. The animation is pretty decent quality (not high, not low - decent), and the dubbing isn't horrible. If you want to kill an hour and change? Watch this.

woodyReviewed in the United States on October 24, 2021
5.0 out of 5 stars
Cool like the video game
Verified purchase
I enjoyed this movie a lot because I used to play the video games when I was in high school. I didn't know much about the characters until seeing this movie. This is very typical of anime from a long time ago, I did not get bored watching it.

kmichaelReviewed in the United States on October 22, 2021
4.0 out of 5 stars
old school anime, cliche'd before it came out
Verified purchase
why was the best part nude anime females? no matter, there was enough aspiration to mythology in the rest of the film to keep me curious until the end.

Joe CodichiniReviewed in the United States on October 4, 2021
5.0 out of 5 stars
Great old school Anime movie with crisp animation and visuals.
Verified purchase
Anime Movie that serves as a sequel to a Anime TV Series based on a SNK arcade video. Don't expect to have a well flesh out characters with intriguing dialogue. Really fun movie with great fight scenes and awesome large lansacape visuals.

Ephraim YasharahlaReviewed in the United States on August 26, 2021
5.0 out of 5 stars
Not the 92 OVA, but the 94 movie
Verified purchase
Incorrect info, but the movie itself was good. I hope to see more from this series. It's been languishing in obscurity for far too many years, when they have some lovable characters and a great universe to explore.

daeagReviewed in the United States on September 28, 2021
5.0 out of 5 stars
Finally
Verified purchase
I love this movie. It was awesome, full of action, and just as good as I remember when I first saw it in the 90s.
See all reviews
Back to top
Get to Know Us
Make Money with Us
Amazon Payment Products
Let Us Help You
EnglishChoose a language for shopping. United StatesChoose a country/region for shopping.
© 1996-2021, Amazon.com, Inc. or its affiliates