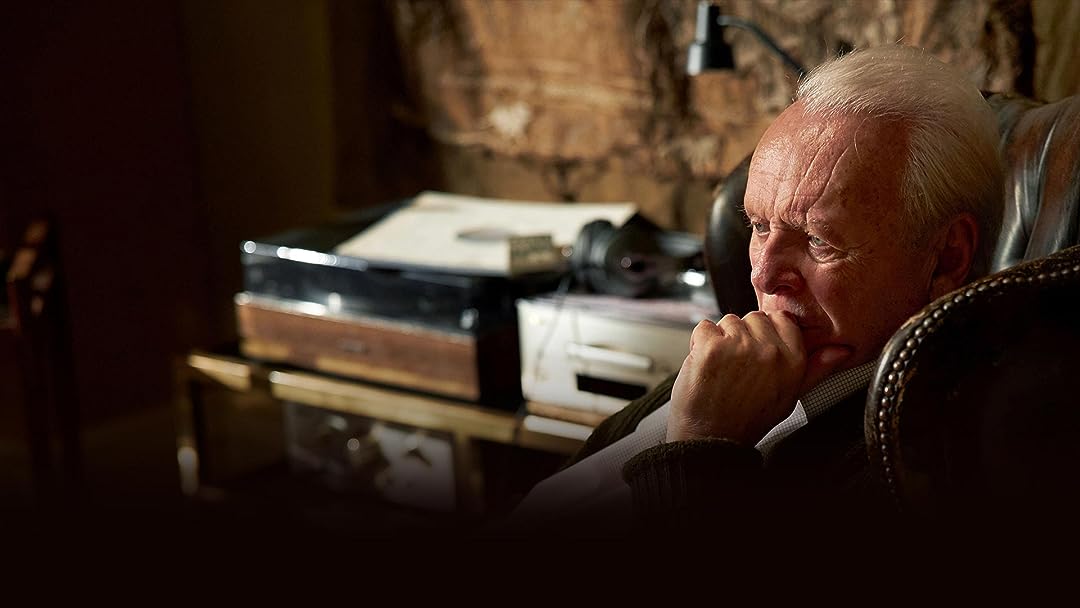 (6,911)
8.31 h 36 min2021X-RayPG-13
A man refuses assistance from his daughter as he ages. As he tries to make sense of his changing circumstances, he begins to doubt his loved ones, his own mind and the fabric of his reality.

Joe R.Reviewed in the United States on March 26, 2021
5.0 out of 5 stars
Brilliant. Disorienting. Devastating.
Verified purchase
Having had several close family members go through significant mental decline, I can honestly say that this movie more accurately depicts what it's like for the caretakers and for the victims of a harsh reality better than any other movie or show I've seen.

Anthony Hopkins is truly amazing as once-strong man whose memories are becoming hopelessly jumbled, trying to keep himself together at times, while others defiantly proclaiming that he's as fine as he ever was and everyone else is out to confuse him for some nefarious purpose. You feel angry with him, hopeless for him, and know that there's nothing that can be done to give the movie a happy ending. And it doesn't shy away from that bleak certainty at all.

Olivia Colman and Olivia Williams are both astounding. The use of both actresses to portray his daughter Anna (and in Williams' case, other characters as well) just adds to the visual language of the film in conveying how confusing and bewildering reality can be for someone losing their relationship with it.

Be prepared going into this. It is brutal. It is honest. It is heartbreaking. It is something that anyone should see to prepare for this kind of thing if it's at all a possibility in a loved one's future.

It's not an easy watch at all, but it's important, brilliant, and truly real.

DONNAReviewed in the United States on March 27, 2021
5.0 out of 5 stars
Disturbing and exquisite
Verified purchase
Worth watching this descent from the inside out and makes one wonder why people are forced to endure this graceless end to life.
35 people found this helpful

S. KeightleyReviewed in the United States on March 29, 2021
5.0 out of 5 stars
Wow! Great Acting!
Verified purchase
This movie is a powerful depiction of Alzheimer's (without every specifically mentioning it). It does a great job of bringing the audience inside the confusion experienced by one suffering from advanced cognitive decline. A truly powerful film, although probably super hard to watch if your aging relatives are CURRENTLY suffering from any form of dementia.
27 people found this helpful

Mrs. Katharine T. HaggiagReviewed in the United States on March 28, 2021
5.0 out of 5 stars
Brilliant film
Verified purchase
A deeply moving and nuanced film, with fantastic performances.
A very insightful look into a life that's unraveling. Hopkins is fierce
as he fights the furies of old age, magnificent and awful in equal measure.
29 people found this helpful

TinyMouseReviewed in the United States on April 29, 2021
5.0 out of 5 stars
Watched this movie 2 times back to back... then watched it 2 more times!
Verified purchase
I've never seen a movie like this. You don't just watch it, you experience it. It really puts you into the mind of someone with dementia.... situations, people, surroundings and the perception of time all begin to shift and merge and rearrange...it's very disorienting yet fascinating. Every time I watched it (4 times so far) I come up with more theories as to what is REAL and what isn't. It's like a thriller, a mystery and an emotional drama all wrapped up into one! If you like goofball comedies only, then this is not for you! But if you enjoy films.... movies that are different.... movies that expose you to other worlds and experiences, then you will love it! I am not going to make a habit of spending $20 JUST to rent a movie, but in this specific case, it was worth it. I was anxious to see it and didn't want to wait for the price to go down. Amazing movie! The movie stays with you. The last scene is unforgettable. Anthony Hopkins and Olivia Coleman were sooooooo good. I can understand why he won Best Actor.
13 people found this helpful

Wallace BachmanReviewed in the United States on April 22, 2021
4.0 out of 5 stars
Brilliant Acting Derailed by Too Clever Story
Verified purchase
This is a beautiful film about an ugly subject. Experiencing Anthony Hopkins, Olivia Colman, and Olivia Williams negotiate the challenges and indignities of dementia with humanity makes the film well-worth seeing. Where it fails is in its attempt to make the viewer experience the disorientation of dementia through placing them in Anthony's shoes. Early, it feels more like a Hitchcockian horror film or whodunit as one attempts to determine what the truth is, who's telling it (if anyone), and whether the possibility of some evil manipulation and gaslighting motivated by greed or something else is going on--or if it's paranoia. All that is interesting, but it calls too much attention to the mechanics of the thing and none of it is developed enough to be central to the story. So the progression of dementia and its toll on caregivers isn't given space, and we're left with only one thing at the center of the film: Anthony Hopkins can act.
13 people found this helpful

JkleanReviewed in the United States on April 12, 2021
5.0 out of 5 stars
Brilliantly written and acted
Verified purchase
If you've ever known anyone with Alzheimer's, this film and it's brilliant deconstruction of time and place do an incredible job of capturing the confusion and disorientation of dementia. It's so well written and masterfully laid out, you won't understand all the fragments yourself at first. Brilliantly takes the viewer into that frightening and upsetting experience. And what can I say about Anthony Hopkins performance? He's been turning in one great performance after another for decades, and this is one of his best ever. Not an easy film, but well worth the watch.
13 people found this helpful

sapientiaeReviewed in the United States on April 27, 2021
1.0 out of 5 stars
Superficial and disappointing
Verified purchase
This movie has so much potential to be great given the relevance of the topic and the superb acting of the cast. However, it comes out miserably flat and bland. The screenplay and directing lacks depth and underwhelms. This truthfully feels more like a play written by a high schooler. If you are a fan of Anthony Hopkins like I am, I would recommend the movie Proof which is superior to this in many ways. I don’t usually write movie reviews, but this film falls so far below mediocrity that I feel obliged to warn others. After all, life is short and time is precious even if it is just two hours.
10 people found this helpful
See all reviews
Back to top
Get to Know Us
Make Money with Us
Amazon Payment Products
Let Us Help You
EnglishChoose a language for shopping. United StatesChoose a country/region for shopping.
© 1996-2021, Amazon.com, Inc. or its affiliates