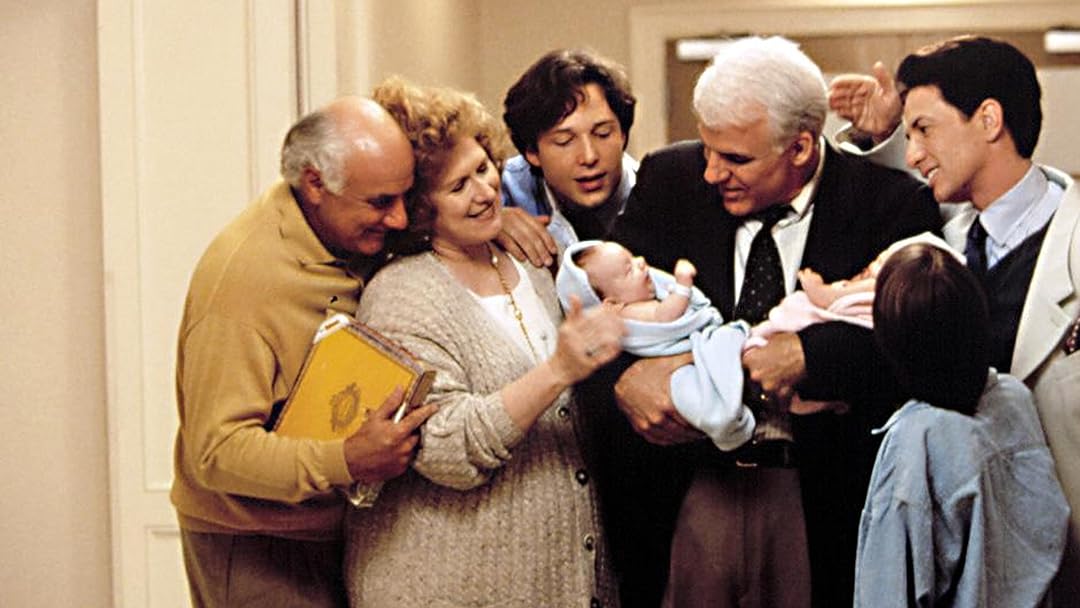 Father of the Bride Part II (Plus Bonus Features)

(5,647)
6.12 h 2 min1995PG
Steve Martin returns in this hilarious sequel to the comedy smash Father Of The Bride. Having married off his cherished daughter, George Banks is ready to get footloose and fancy-free – until his daughter and his wife both announce they're pregnant.

Dr. PaulReviewed in the United States on March 23, 2021
5.0 out of 5 stars
The family is back and they’re adding an addition... or two
Verified purchase
Who didn’t miss the Banks family after Annie got married? It’s been awhile, but having the Banks visit is always fun. * Even more fun was catching up with them again during the Covid lockdown - who knew...
We had the Father of the Bride streaming for awhile, so when Amazon had a great deal we added #2 - here come the Baby(s). As always, Steve Martin is fun to watch and Diane Keaton makes us smile.

As the family come back together, Annie and her new hubby learn they are expecting. And everyone is excited to hold the baby shower - cue Frank. And the over the top fun between he and Mr. Banks. But when they find out Nina is expecting too... Let the good times roll. This is a light, fun, charming, and always interesting time with the Banks family. Date night, Saturday or a rainy afternoon... sit back, relax, and have fun. The film stands the test of time... so enjoy.

lauren leonardReviewed in the United States on January 18, 2019
5.0 out of 5 stars
Best holiday movie Ever
Verified purchase
I love Steve Martin and Diane Keaton in this. My husband always picks this movies when my parents come to visit and it’s nice to have an all around positive and completely safe movie for all members down to the toddler to be able to watch!
4 people found this helpful

koneReviewed in the United States on July 27, 2008
5.0 out of 5 stars
Father of the Bride is Hilarious!
Verified purchase
I just finished watching this movie last night and I wholeheartedly recommend it as a great movie for the entire family! This is perhaps the best movie rental I have seen this year.

I have followed the career of Steve Martin since the 1970's. His comedy routine was really over the top in terms of his nightclub and television presentation. Lots of sight gags and exaggerated funny stories. I guess I expected the same sort of humor from this movie and fortunately, was I wrong. Instead, Martin has a genius for a very suble humor that is absolutely hilarious. I laughed out loud and actually fell on the floor laughing in one scene.

A well-done movie should make you laugh, cry, and think. This movie does it all. Watch it with someone you love, and just see the emotions this movie evokes. It has something for every age and is not offensive whatsoever. I congratulate the producers for giving the American public a film that the entire family can appreciate and be entertained by.

This movie immediately rocketed to the top of my "funniest movie ever" category. And it is because I could relate to the situations presented, the feelings of the characters, and the inherent humor in the lives of the characters.

Yet, this movie is not just a comedy. It is a coming of age movie for baby-boomers, and for twenty-somethings. It made me laugh out loud, evokes copious tears many times, and made me think about what is really important in life. The core message of the film is that family and relationships are what makes life worth living. Steve Martin (as George), has a telling moment at the hospital as both his wife and his daughter are about to deliver at the same time. Martin turns to the young female doctor and says, "Doctor, these two women are my entire life". (In other words, I love them so much; don't let anything happen to them!). That one line is the essence of the film, and life in general.

Diane Keaton's smile is so lovely, and she is the perfect foil for the serious George (Steve Martin). There is quality in every aspect of this film. The supporting cast is exceptional, with Martin Short's characterization of the obviously gay wedding/baby shower planner a sure laugh producer!

This is a 5-star movie in my book. I love the sets, the background music, the acting, - everything! Most highly recommended! Please Hollywood producers, give us more movies like this!

Melissa SchuchmanReviewed in the United States on October 4, 2020
5.0 out of 5 stars
Greatness
Verified purchase
A decent sequel to a great classic. It’s is funny and emotional all in the same film. Love this movie.
One person found this helpful

Mindy MillikanReviewed in the United States on January 6, 2018
5.0 out of 5 stars
Absolutely one of my favorites...
Verified purchase
Even better than the first. My daughter thought it was funny too. There was only one part when they were in the kitchen on the rainy day that I had to fast forward/have her walk out of the room for because she is fairly young and I don’t want to approach the topic of sex with her at her age (8). Call me a prude.
2 people found this helpful

Ethan SevynReviewed in the United States on October 13, 2019
5.0 out of 5 stars
Very cute/funny movie!
Verified purchase
Just like the first one, Martin Short steals the show! A funny 90s-esque movie. Actually pretty refreshing compared to today’s movies.
One person found this helpful

blessedbeyondwordsReviewed in the United States on September 17, 2019
4.0 out of 5 stars
Good; but the first was better
Verified purchase
They did a good job with this movie; but it's hard the beat the classic first movie (not the original original but the 1991 remake)
One person found this helpful

CMDReviewed in the United States on December 21, 2009
5.0 out of 5 stars
Filled with laughs, innocence, and fun!
Verified purchase
I love this movie, it's definitely one of Steve Martin's best and filled with lots of comedy. The trip to the hospital when mom and daughter are about to deliver is hysterical. Lots of heartwarming moments throughout the film too. Was so happy that Martin Short (Franc) and his assistant returned for Part II. When they are in the hallway of the hospital once Nina finds out that she is expecting it is very funny! I have watched parts I and II several times and am very happy that they are part of my dvd collection. They truly don't make too many films of this genre anymore, unfortunately. The cast is terrific and it's just a great movie to share with the whole family, even grandparents! No unexpected suprises or bad language. Would highly recommend!
3 people found this helpful
See all reviews
Back to top
Get to Know Us
Make Money with Us
Amazon Payment Products
Let Us Help You
EnglishChoose a language for shopping. United StatesChoose a country/region for shopping.
© 1996-2022, Amazon.com, Inc. or its affiliates