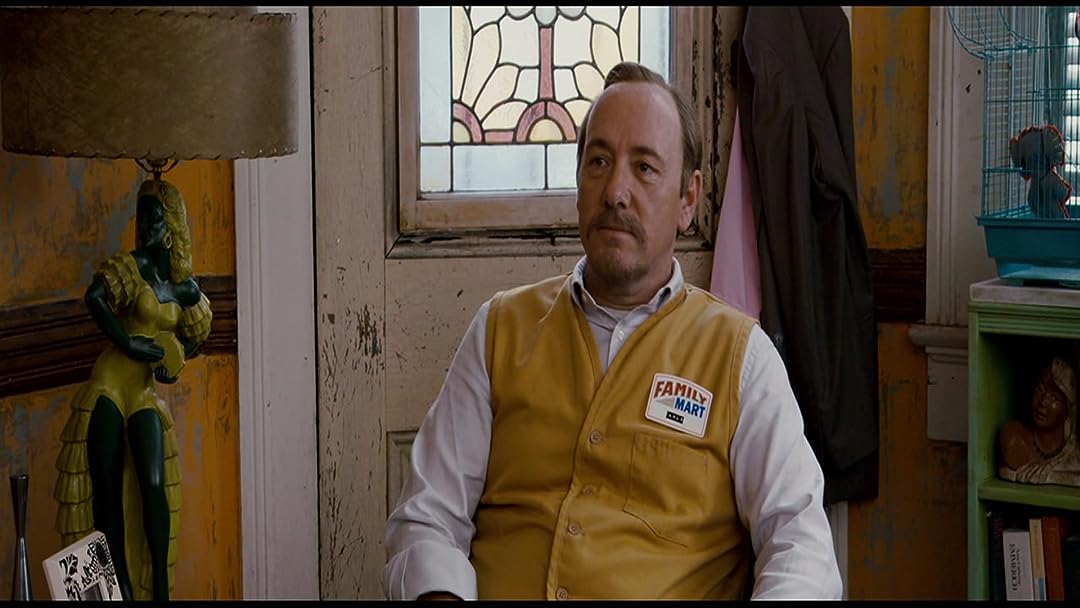 (170)
1 h 33 min2011PG-13
Robert Axle (Kevin Spacey), an eccentric inventor-turned-egomaniacal-infomercial-guru, loses it all when his invention maims thousands. Now out of prison, he's ready to redeem his empire.

WowZowNowCowReviewed in the United States on August 4, 2019
1.0 out of 5 stars
If this film is accurate, its director is in prison
Verified purchase
In fairness, I got five minutes in. Still...

I know the main point I'm bringing up seems marginally relevant, but is it? It shows how little care when into the film. This extends to almost criminally bad dialogue, comically awful direction, and...well, listen:

The entire film is based on Kevin Spacey's character going to prison because a product his large multimillion dollar company sold injured its users.

I'm not saying it wouldn't be great if it could happen, but if no one was punished with death (or even a day in jail) - as I think clearly they should have been - when Boeing's seemingly criminal negligence killed hundreds of people, it is clear that our society does not personally punish things companies do. God, it would be great, perhaps, if these people were punished, but they aren't. Corporations are punished with fines. That's it.

Thus, the entire film is based on something that could never happen. A multimilion dollar company that is shown to inhabit its own skyscraper has lawyers, and its founder doesn't go to prison in real life. Colondel Sanders doesn't go to prison if someone chokes on a chicken bone. No one in a multimillion dollar corporation is going to jail because of a faulty product. Period.

Of course that, in and of itself, merely is one reflection of an utter lack of care for ANYthing in the film. EVERYTHING is at least this bad. (Well, again, I can only speak to the first five minutes. But, my life is too valuable to waste another minute on this horribly directed, with horribly dialogue, poorly cast, badly acted, waste of...everything.

CocoReviewed in the United States on July 19, 2019
4.0 out of 5 stars
I like and understood the point of the movie. Besides, Kevin is surely a good actor!
Verified purchase
One becoming a financial success on its own accord and ability is subject to envy. Someone is always behind to destroy and bring an individual down and to the wall of shame, if not prison. While other serious felons may get away. Look at the Martha Stewart case she was punished severely but those behind the scene trying to destroy her empire failed. She came back stronger. One will be surprise how (the ghost that hides behind the media] contributes thru its social network to the demise of many successful people--all by envy. This movies may not have been the best but makes sense in many ways--guilty and destroyed by public opinion? It happens every day...who needs the Courts to prove one is innocent anyway when we have the evil and vicious guys including the corrupted and bias courts abusing the system?
4 people found this helpful

she_thinks_a_lotReviewed in the United States on September 3, 2017
4.0 out of 5 stars
Thoroughly enjoyable!
Verified purchase
I really liked this movie, not just because I'm a Kevin Spacey & and Heather Graham fan, but because it was really well done! It had great writing and excellent acting. The story line has lots of interesting twists and turns along the way so that you won't mind the hokey ending at all. (I won't give the plot away, but it does go to show that criminals will do the same thing after prison as they did before prison.) Anyway, I gave the movie 4 stars because it was a tad slow in places, but overall it's truly a good watch (pun intended, which will make sense after you see the movie). I'm surprised that this movie doesn't have overall higher ratings.

One final note, Heather Graham played a character who is about 25 years younger than her actual age, which is quite skillful on her part.
9 people found this helpful

MelyMReviewed in the United States on August 17, 2019
5.0 out of 5 stars
Funny, Interesting, and heartwarming
Verified purchase
I am honestly surprised by all the negative reviews. I really enjoyed this movie and I am really glad I watched it. It was funny, had a great story, and interesting characters. I am starting to not trust the Amazon reviews because I have watched movies with not so great reviews and really enjoyed the movies! See for yourself what you think about it.
4 people found this helpful

nona sarkReviewed in the United States on January 12, 2021
2.0 out of 5 stars
2 Stars because Spacy has a body of work.
Verified purchase
Annoyingly unrealistic. Going to jail for product injury and hell for being a multi million dollar provider for your family? Yeah right. Looooots of hate filled people in this film shootiong laserbeams from their eyes at the only well adjusted character in the film (the new husband is well adjusted as well). Most likely born of the ire from the Fanney Mae Freddie Mac lend money to anyone - no background check allowed cause its discriminatory to do so debacle. All I could think of is scapegoating is fine as long as its' done with malicious intent on a group of persons that cause harm to others (like earning the top 1% in the nation) and causing envy. The Mom wasn't there for the kid either was she? And she was very self centered and greedy with the money but she was made of teflon. Movie just didn't stick together - no pun intended.
One person found this helpful

RvnSReviewed in the United States on June 7, 2019
3.0 out of 5 stars
meh
Verified purchase
Overall the story-line is not believable and is just completely unrealistic. It lacks in everything, the characters feel empty and controlled by plot, not how it should be. Its such a childish plot that its annoying to watch. Its only three stars (not less) because their are many worse movies so I had to keep my standards low.
3 people found this helpful

sharon m.Reviewed in the United States on January 24, 2021
1.0 out of 5 stars
Meh, It was ok.
Verified purchase
There were some funny parts in the beginning, but not long after that, it kinda dragged. And to be honest, after the scandal concerning Kevin Spacey being accused by 15 plus men as a sexual predator and probably a pedophile it's kinda troubling to see him on screen- again.Must be why some of the things I've seen him in lately aren't that great.

Daniel V. MarquezReviewed in the United States on December 12, 2020
5.0 out of 5 stars
I Loved This Movie!
Verified purchase
I was a bit worried about seeing the movie given dome of the negative reviews. However, I found this movie to be an inspiring movie about the power of love, forgiveness, reform, acceptance, perseverance, risk, and hope. The acting was phenomenal, too! I highly recommend this movie for those who crave a rags-to-riches movie.
One person found this helpful
See all reviews
Back to top
Get to Know Us
Make Money with Us
Amazon Payment Products
Let Us Help You
EnglishChoose a language for shopping. United StatesChoose a country/region for shopping.
© 1996-2021, Amazon.com, Inc. or its affiliates