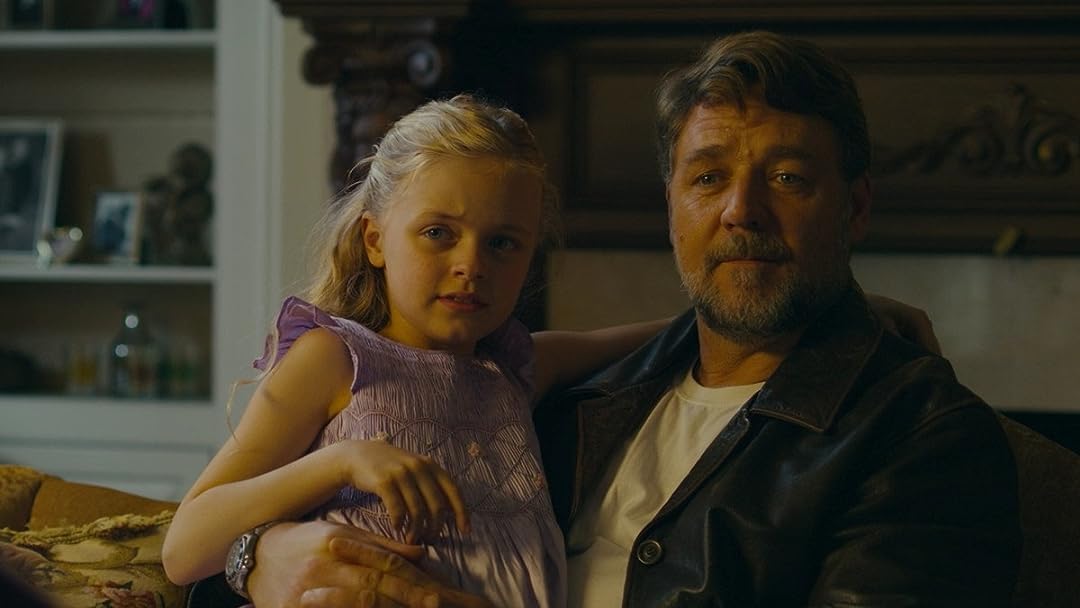 (1,122)
7.01 h 56 min2016X-RayR
From the director of Seven Pounds and The Pursuit of Happyness, and featuring an all-star cast led by Russell Crowe, Fathers and Daughters is a powerful story of love, loss and the tragedies that bring us together and tear us apart.

Big DougReviewed in the United States on June 8, 2020
5.0 out of 5 stars
great movie ,great actors, well done to all of you involved.
Verified purchase
I am a single Dad, Widowed, etc. My Daughter is the best thing I have in my life. She has been difficult to raise at times and I have not made great decisions either. We fight, we laugh, we are always here for each other.
P.S. I am going to be a Grand Father next month.

YankeeinSCReviewed in the United States on April 8, 2018
5.0 out of 5 stars
Based on Reviews, I Almost Did Not Watch This Movie
Verified purchase
A movie that makes you smile, a movie that may make you cry. Incredible warmth coming from Russell Crowe towards his daughter and of course she to him - the closeness we all wish to have with our family. The entire movie was real to life, not the more far-fetched scenarios people seem to enjoy - although some reviewed it as 'predictable' - I found none of that. Through the flip flops from little girl to adult, it was easy to follow, and nothing was ever lost in the story, but it made you see the transitions in her personality and why. Most of us reflect on our upbringing/past to understand our personality and behaviors. This can be a very personal, thought-provoking movie and it could be mothers and daughters or sons and fathers, it won't make a difference. My best advice is to watch the movie, think for yourself, and not concern yourself with the professional critics. So many of the reviews were so off-base, missed the delights and the heartbreaks, had a lack of human compassion, were intent on echoing negativity - make up your own mind; bet you watch it more than once!
107 people found this helpful

T.D.Reviewed in the United States on July 12, 2020
5.0 out of 5 stars
As a fatherless daughter I share the same pain and void...
Verified purchase
As a daughter who never experienced fatherly love, I avoided this movie for a period of time. The pain sometimes is so great, the consequences of growing up without father's protection and love are so big, the void is so deep...
Now I am a wife and a mother of two sons, I live with three men and struggle every day. I can't receive love simply and openly. I can't love as I should either. And knowing that is hard.

The movie is great (as any movie with Crowe).
It shows the battle, the emptiness, the greatnesses of father's soul...
Did father's love fill the void in Katie's heart? No. I think it created even deeper void. She knew, no one ever will be able to love her as much as him. She learned, that such a deep all consuming love does not exist for long and she was afraid to love and be loved that much.

The movie also shows the despair and lostness of any woman without man's greatness and dedication to be with her and care for her always. But still, it is better to love, than to be loved.
Our ability to love makes us "well lived" people.

AlexandraReviewed in the United States on June 21, 2020
1.0 out of 5 stars
Not for us!
Verified purchase
This is not what we were expecting from such high ratings (4.5 stars). Extremely disappointed! A lot of cringy moments about hooking up and cheating. We felt like turning off the film many times but hoped for a good ending--there was none. Pretty pointless film. I did not feel like the main character learned anything through her experiences. I mostly grew to dislike the main character, but thought maybe that's what the director wanted us to feel at first??? A proud and hardworking father would be very disappointed to see his daughter doing what she did. The film dragged a bit and rushed to somewhat "fix" things in the end. Not something i would recommend to anyone.
20 people found this helpful

Ron BlachmanReviewed in the United States on June 13, 2020
4.0 out of 5 stars
Thoughtful performance from Seyfried, Reminds me of Keaton in "Goodbar" but with a better outcome.
Verified purchase
All the performances are good. Amanda Seyfried has to be a woman so fearful of loss as to flirt with self destruction. She carries it off beautifully. Russell Crowe is very good in a role he clearly wanted a lot. Bruce Greenwood and Diane Kruger play the heavies in this very well. Every time I see Kruger in a film I wonder why no one has done a Marlene Dietrich bio-pic just so they could cast her in the lead.

If you like the TV series "This is Us" you'll like this movie.
18 people found this helpful

SalmanReviewed in the United States on June 20, 2020
3.0 out of 5 stars
Solid C+/B- Movie
Verified purchase
This could be a tough movie to watch, depending on how much you can relate to the plot and the individual characters. The father, daughter and boyfriend are the three main roles. If you can relate to one of the three, then you will remain engrossed in the plot. Of course your emotional response to the movie depends on which character resonates with you the most. All three characters are played by solid actors with a proven track records. The movie is well written and hits all the real-world examples to convey its story/message. The end could be seen by some as realistic while others as a fairy tale.
12 people found this helpful

Lawrence RobertsReviewed in the United States on August 1, 2020
3.0 out of 5 stars
This is a very, very emotionally heavy movie - well done, but very emotionally draining.
Verified purchase
I struggled between giving it 3 stars and 4 stars and settled on the 3 simply based on my enjoyment - rather lack of it - of the movie. Don't get me wrong - this is not a bad movie. It is not poorly scripted, directed, or acted. It is just heavier than a suitcase full of gold bullion on planet Jupiter. I think the acting was really great - these characters were so tormented, traumatized, hurting, - it took some good acting to make them appear as miserable as they were scripted. The father had a brief lapse of attention which caused a car accident and killed his wife - his beloved little girl's mother. He never really recovered physically or psychologically from that. The sister in law and her husband were bad people - but they were just ordinary bad. They were not grotesquely evil - just, rich, arrogant, controlling. Certainly, deserving of contempt for trying to exploit the poor man's emotional and physical issues by taking the only thing he had in his life - his darling little girl. The little girl, who as a grown up is the main character in the movie suffers the tragic loss of her parents as a young child - and it leaves a hole in her heart that she seems unable to fill. She is intellectually brilliant and artistic, loving, caring, erratic, irresponsible, promiscuous, and such a mess that very few of us could ever really identify with someone with all of the demons in her mind that create these problems. The boy friend is the hero of the story - but even he seems not to realize how badly damaged she is, and can't be the hero he needs to be, and must be to help her find the love she so desperately seeks. Again, I am not saying by any means that this is a bad movie - I just telling you that it is incredibly emotionally straining. It almost makes a Cohen Brothers movie as light as Mary Poppins. But, there is hope in the end. So if you decide to go into it - don't give up.
8 people found this helpful

SueReviewed in the United States on December 24, 2017
5.0 out of 5 stars
Amanda Seyfried is fantastic as his daughter
Verified purchase
Russell Crowe gives an outstanding performance of a complicated father trying to hold his life and family together, while struggling with the mental and physical aftermath of a car accident. He struggles under the demands of his writing career, while trying to be a single parent. Amanda Seyfried is fantastic as his daughter, dealing with the aftermath of the loss of her mother and the struggles of her father. She is believable, relatable and honest in her performance. The movie is a tear jerker, so keep the tissues handy.
37 people found this helpful
See all reviews
Back to top
Get to Know Us
Make Money with Us
Amazon Payment Products
Let Us Help You
EnglishChoose a language for shopping. United StatesChoose a country/region for shopping.
© 1996-2022, Amazon.com, Inc. or its affiliates