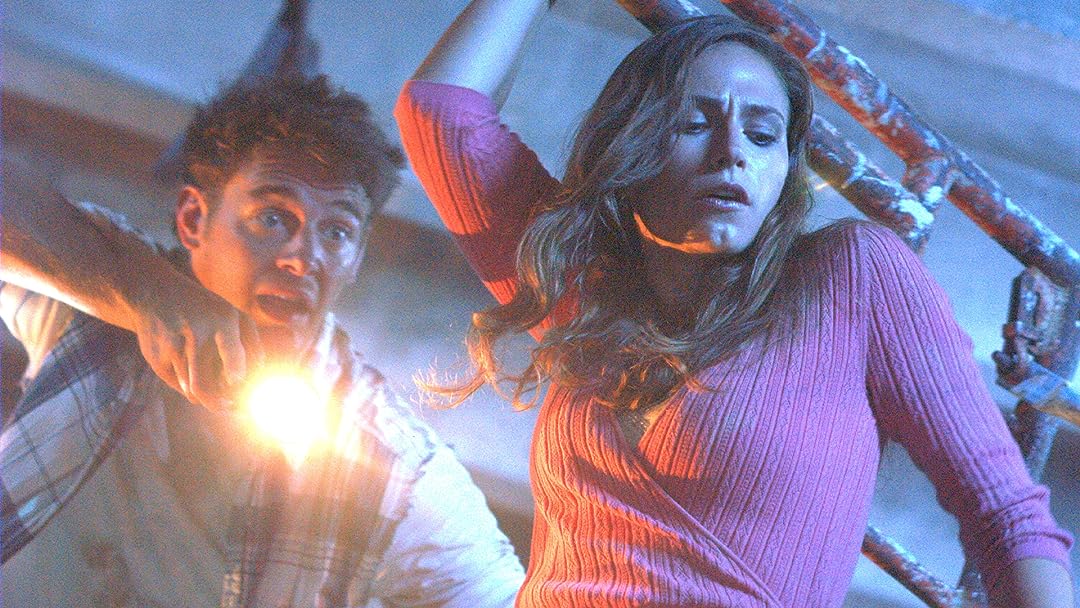 (52)
2.91 h 28 min200413+
In the beautiful underwater reefs off the coast of Florida's pastoral Pajaro Island, a fissure rips open in the ocean floor. When graduate student Greg Chambers encounters the seismic readings, he suspects that a massive earthquake is about to give the small island a rude awakening.

FarthionReviewed in the United States on October 29, 2018
2.0 out of 5 stars
If there was an award for over-acting...
Verified purchase
Okay, I did watch it to the end, only because I was rooting for the earthquake to kill everyone.

If there was ever made a movie that incorporated every cliche one could find in every cheaply made movie, this was it.

The drama consisted entirely of shouting at each other.

You knew who was going to die long before they died (this is different from wishing they all died).

The "special effects" incorporated what was OBVIOUSLY Styrofoam, as well as what appeared to be a firefighter's training building that resembled Dr. Who's Tardis (or any hut from Gilligan's Island) in that it was tiny on the outside and huge on the inside.

At one point, you know the script called for moaning in pain, but the guy's screaming was identical and sustained and annoying as hell. His death wasn't a tragedy. It was more like self defense, since he was trying to kill my patience and tolerance the whole time. I have to admit his end was probably the highlight of the film.

The script sounded like it was written by a Director's School dropout.

Calling it bad is a compliment.

So why not one star instead of two?

Well, I figure anything I can get through all the way deserves at least two. They they occasionally went into "Wow, they almost sound like real people properly reacting to the situation" land. (At least for long enough to really shatter the illusion when they abruptly deported themselves from that land with egregious fakery in their acting.) And the PLOT didn't entirely suck (even if the execution did).

If you're bored out of your mind and are thinking about self harm, try watching this instead. It accomplishes much of the same thing as self harm, but the wounds don't last as long and the medical bills are a lot smaller.

MacM.Reviewed in the United States on January 5, 2019
2.0 out of 5 stars
ENTERTAINING
Verified purchase
So what if it's no where near an Oscar Award Winner. Why does everyone feel like they have to be a Siskel or Ebert these days. Yes it was a B movie. Yes it was low budget. Yes the acting could have been better. And finally Yes the special effects weren't very good. But I was entertained... and if I needed something to watch and couldn't find anything else, I might even watch it again. Stop watching movies looking for their flaws (let the professional critics do that) and just kick back and enjoy the fantasy of it all. If I want Reality, I watch the news (and even then take it with a grain of salt :D)
8 people found this helpful

AnAmazonCustomerReviewed in the United States on December 20, 2018
1.0 out of 5 stars
Worst movie in a long time!
Verified purchase
The "actress" that plays the character Allison is one of the worst actresses I have ever seen. The whole movie is completely boring. It focuses on a group of four people that are supposedly stuck underground in some tunnels located under a building that one of the four created, yet they can't seem to find their way out of them!?! They walk around looking for Allison calling her name and unable to find her for about 10 minutes- the tunnels aren't even that big! I mean, they are located just under a building and the building isn't even that big, so how can the tunnels be so large that they can't hear someone yelling their name. Stupid Allison, who's not even hurt, is on the ground (for no reason) over-dramatically crying and acting like she's some helpless old lady. What, did her legs suddenly stop working, is THAT why she couldn't walk to find the other 3 people. Stupid, stupid, stupid. I'm shocked that Doug Savant would even be in such a stupid movie. Whoever wrote it should just go hide under a rock!
One person found this helpful

Lets CoexistReviewed in the United States on June 8, 2019
1.0 out of 5 stars
One of the worst
Verified purchase
This is one of the worst movies even in term of bad disaster movies. Allison just about drove me nuts. I wanted to bitch slap her. And her saving/relieving diabetic shot at the end was just such a joke. There was just so much that was totally unbelievable in this and totally corny it was hard to watch. Goes beyond bad.
One person found this helpful

Manesia KellyReviewed in the United States on December 9, 2018
2.0 out of 5 stars
BAD ACTING AND DIALOG!!!
Verified purchase
This would have been a good movie if it wasn't for the BAD ACTING and DIALOG!! if you don't mind NOT having both thing's in a movie then this one's for you other then those two points it was only worth 2 star's and that's ONLY for the story line
2 people found this helpful

Kathy HReviewed in the United States on July 19, 2019
1.0 out of 5 stars
Low budget trash
Verified purchase
The most expensive prop in this movie is a 15 year old jeep. I would say they made this movie for less than $10k. Horrible acting and the script might have been written by some 8th grader who probably wrote it during detention just to waste time. Take it from me, don't waste a bag of popcorn on this one....

TalkdtwoReviewed in the United States on September 9, 2019
2.0 out of 5 stars
Not worth it
Verified purchase
I like disaster movies. I even like B disaster movies. This one is an F. It's very little about the fault line and mostly about getting people out of a concrete basement. If you like watching people wander through tunnels, then this is the movie for you!

MikeReviewed in the United States on December 2, 2018
1.0 out of 5 stars
If you don't watch it, it's a good movie..no not really
Verified purchase
Like Florida needs another disaster scenario, with hurricanes and tourist we don't need to add earthquakes to our list. But after watching about 20 minutes of this, I welcome one!!
2 people found this helpful
See all reviews
Back to top
Get to Know Us
Make Money with Us
Amazon Payment Products
Let Us Help You
EnglishChoose a language for shopping. United StatesChoose a country/region for shopping.
© 1996-2022, Amazon.com, Inc. or its affiliates