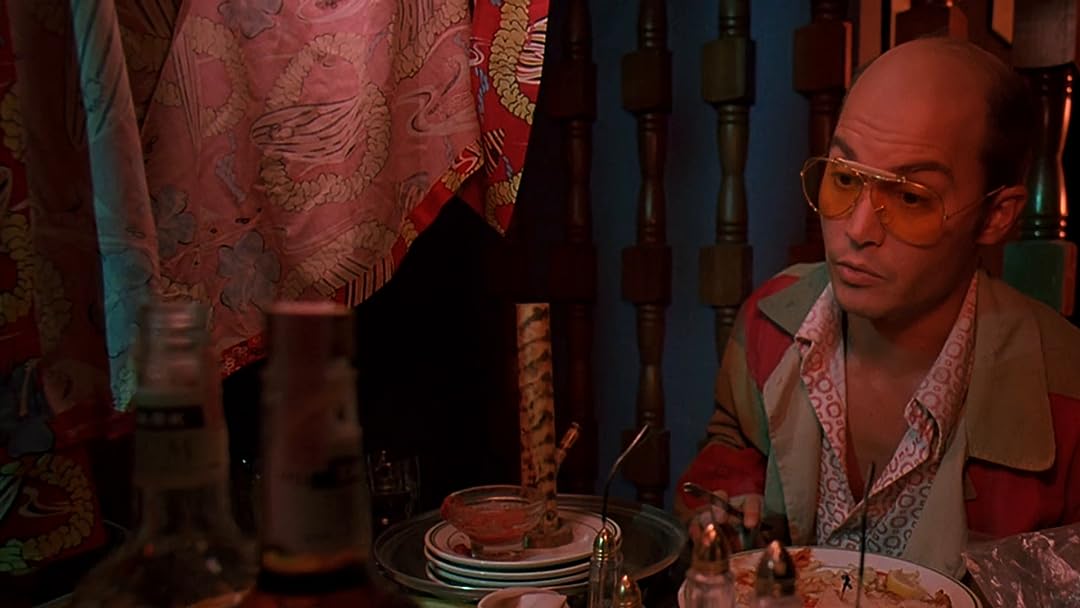 Fear and Loathing in Las Vegas

(10,497)
7.61 h 58 min1998X-Ray18+
Based on the book by gonzo journalist Hunter S. Thompson! An eccentric writer and his Samoan attorney embark on a frenzied, drug-laced journey to Las Vegas in search of the American Dream. Loads of star cameos!

JedinwaReviewed in the United States on March 6, 2020
3.0 out of 5 stars
Movie is okay, book was better.
Verified purchase
Not horrible, but not great either. While Depp was definitely the PERFECT actor for this role, the way this project adapted the story leaves much to be desired, due to too many changes (if you're a stickler for detail and accuracy). Sort of similar to the way Kerouac's, On the Road film-adaptation (2012) was also needlessly tinkered with by producers who love to fix things that aren't broken. Thompson himself was involved in making the picture, and I'm moderately surprised that he allowed it.
Aside from the changes, my main complaint is the pace. In my opinion, many of the scenes should have been tightened up... too much monotony. I do recommend it, but just barely.
7 people found this helpful

joel wingReviewed in the United States on January 27, 2021
4.0 out of 5 stars
Terry Gilliam interprets Hunter S Thompson's book about a trip to Vegas
Verified purchase
We were somewhere around Barstow when the drugs began kicking in. That’s the opening of Fear and Loathing In Las Vegas which is based upon a Hunter S. Thompson book of the same name. It was directed by Terry Gilliam of Monty Python Fame. It’s a drug fueled journey into Las Vegas in 1971 by Raoul Duke played by Johnny Depp who was obviously Thompson and his lawyer Dr. Gonzo played by Benicio del Toro. Originally they went there to cover a motorcycle race but most of it takes place in hotel rooms and casinos as the two trip off of a number of narcotics.

Most of the film is just hilarious as the two hallucinate, stumble and mumble their way through Las Vegas. During the opening for instance Duke believes there are bats flying all around them as they drive into Vegas.

There are a bunch of unexpected cameos as well. Tobey Maguire for instance place a hippy hitchhiker they pick up. Christina Ricci is a girl Gonzo found on an airplane who made paintings of Barbara Streisand while Gary Busey was a copy who pulled over Duke for speeding and then asked for a kiss at the end because he was lonely out in the middle of the desert.

Added to that were Duke’s/Thompson’s reflections upon the recently deceased 1960s. He wrote about how he experienced the Summer of Love in San Francisco and then saw it all end. There are pictures of protests against the Vietnam War and for Civil Rights thrown in as well capturing the period of youth culture, experimentation, sex, drugs and Rock N Roll that gave forth to Thompson’s book.

It’s a crazy mish mash that is a great and memorable trip.
C

AnonymousReviewed in the United States on September 14, 2020
5.0 out of 5 stars
Not enjoyable to watch, but an excellent movie
Verified purchase
The acting and production is polished to a sheen and the writing is beautiful. I was entertained throughout.
The journey itself is a chaotic, miserable mess, that long overstays it's welcome, but that is kind of the point, I suspect.

Throughout most of the film, all I could think was how and when are they going to wrap this up? The characters lost my sympathy very early and their antics become stale at the same rate. It sort of reminded me of Catcher in the Rye in that sense. There is no one to firmly root for and seemingly no goal to drive the plot forward.

By the end, I felt like I had experienced something important and insightful, but couldn't confidently put my finger on what exactly that insight is. The story really left me thinking, which I appreciate. If nothing else, it exemplifies the mindset of a culture and era.

One thing that surprises me is how many people interpret this movie as a comedy. I saw it as an absolute horror show, a realistic journey through some of the darkest, most terrifying parts of the human psych. What could be worse? To each their own, I guess.

Highly recommend, but brace yourself. You'll be in for one hell of a movie. For me it was hell to watch, but for others it's a hell of a good time, so if that doesn't peek your interest, then I don't know what will.
4 people found this helpful

Paul S. PersonReviewed in the United States on April 9, 2020
1.0 out of 5 stars
Bad Gilliam. Indeed, Apalling Gilliam. But It May Not Be His Fault.
Verified purchase
I put off watching this for a long time because it is a druggie flick and I really don't care for druggy flicks.
And, boy, is it ever a druggy flick. I don't think the protagonists have been in a natural state for decades when it opens, and they certainly aren't in one at any time during the film.
But is this Gilliam's fault? He appears to be filming an article written as a result of this "trip" (a word of many meanings in this case) and may well, for all I know, have done so with great accuracy.
So, if you like druggies acting like druggies, this is the film for you!
If you don't, I would suggest giving it a pass. Unless you are required to see it for Film School or something.
6 people found this helpful

Alejandro E PerezReviewed in the United States on August 13, 2021
3.0 out of 5 stars
Just another mindless freak in the freak kingdom
Verified purchase
Hunter S. Thompson is a con artist drug addict who happens to be Doctor in Journalism. Although humorous, Hunter S. Thompson and his crazy Samoan Lawyer take so many drugs and interact so frantically with their environments that it only brings misfortunate and disaster to whoever is on the way while quoting how great the acid culture is. Deep inside he is trying to be a good Christian as he says the Lord's name when he is in trouble, but he is generally an inconsiderate prick for no reason and Paganistic in nature by scamming everyone and cheating at every opportunity. He is not Heroic Comedic Psychopath, because there is nothing heroic about him. He is only a Comedic Psychopath hanging around with a angry psychopath doing wild drugs and scamming people. I still give it a solid 3 Stars because it just a senseless wild ride where you could be staved by accident or intentionally by those psychos. Hotel room with Hunter S. Thompson? No thank you.
2 people found this helpful

musicfan28ifReviewed in the United States on September 17, 2020
4.0 out of 5 stars
Cheech and Chong go Howard Hughes
Verified purchase
Fear & Loathing is a hardcore drug psychedelia experience that happens when a gonzo journalist and his flawyer go to Vegas ostensibly to cover an off-road race.

The two obvious movie reference points are Bill Murray’s “Where the Buffalo Roam” and Cheech &Chong movies. The Bill Murray movie was about 90% old school gonzo journalism with Nixon, Dolphins vs. Cowboys, a Bloody Mary and hotel room mischief revolving around football roughhousing.

Fear & Loathing is more like 10% gonzo journalism and 90% Cheech & Chong drug-related humor. It has it’s funny moments such as a bar full of lizards but the hardcore drug effects in their hotel room turns the movie into a Howard Hughes’ian dark psychedelia inviting the viewer to reflect on the disillusionment of the love generation. At times more of a horror flick than dark comedy. Sans the Ice Station Zebra.
2 people found this helpful