You've subscribed to The Horus Heresy! We will preorder your items within 24 hours of when they become available. When new books are released, we'll charge your default payment method for the lowest price available during the pre-order period.
Update your device or payment method, cancel individual pre-orders or your subscription at
Your Memberships & Subscriptions
There was an error. We were unable to process your subscription due to an error. Please refresh and try again. 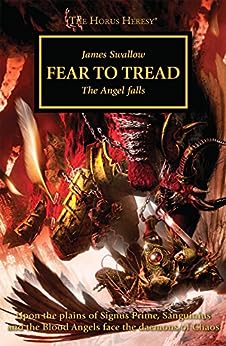 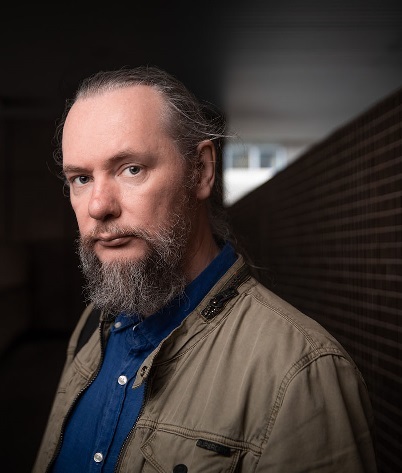 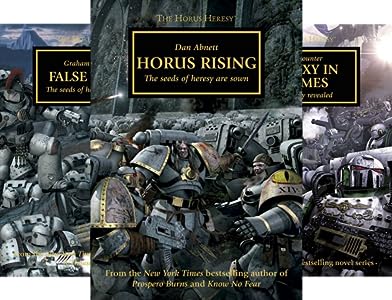 Tags that will help you discover similar books. 6 tags
horus heresymilitaryspace operaadventurewarhammer 40k40k
Results for:
Page 1 of 1Start overPage 1 of 1
Previous page
Next page
Where do clickable book tags come from?
Book tags are created from a variety of sources, some of which are customer-generated. Amazon is not legally responsible for the accuracy of the tags represented. If you are an author or publisher and would like to remove a tag associated with your title, please contact your vendor manager or publisher support team.
Amazon Business: Make the most of your Amazon Business account with exclusive tools and savings. Login now

James Swallow is a New York Times and Sunday Times (UK) bestselling author, BAFTA-nominated screenwriter, and the only British writer to have worked on a Star Trek television series. His Star Trek fiction includes The Latter Fire, Sight Unseen, The Poisoned Chalice, Cast No Shadow, Synthesis, Day of the Vipers, The Stuff of Dreams, Infinity’s Prism: Seeds of Dissent, and short stories in Seven Deadly Sins, Shards and Shadows, The Sky’s the Lim­it, and Distant Shores. His other works include the Marc Dane thriller series and tales from the worlds of 24, Doctor Who, Star Wars, Halo, Warhammer 40,000, and more. He lives and works in London. --This text refers to an out of print or unavailable edition of this title.

4.6 out of 5 stars
4.6 out of 5
179 global ratings
How are ratings calculated?
To calculate the overall star rating and percentage breakdown by star, we don’t use a simple average. Instead, our system considers things like how recent a review is and if the reviewer bought the item on Amazon. It also analyzes reviews to verify trustworthiness.
Top reviews

Thaddeus7
4.0 out of 5 stars Surprisingly Scary
Reviewed in the United States on May 29, 2019
Verified Purchase
Fear To Tread manages to do something which I don't recall any other Black Library work doing; presenting a Primarch in a state of true fear (or at least the closest thing Primarch's experience to fear, anyway). Sangiunius and his entire Legion are pushed to the brink in this tale of mystery, intrigue, revenge and annihilation.

When the Blood Angels enter the Imperial system overtaken by Chaos, but are themselves ignorant of Chaos, I had a few moments of true anxiety for the main characters as they are forced to learn the hard way. Losing ship after ship, legionary after legionary. Only towards the end, thanks in no small part to a certain Flesh Tearer, do the Blood Angels finally confront the truth of what they face and learn to overcome their foe.
Read more
One person found this helpful
Helpful
Report abuse

anniehill3333
5.0 out of 5 stars Rich and intoxicating, like a fine old Bordeaux
Reviewed in the United States on May 21, 2021
Verified Purchase
My first meeting with Sanguinius, and he is even cooler and more badass than I had come to expect from what I knew of him previously. The setting and plot - the Chaos-infected system of Signus Prime, and the machinations of the Warmaster and his human and warpspawn allies, are horrifying, mesmerizing, and unforgettable - the essence of grimdark. But the character that sticks with you most of all is Brother Meros.....
Read more
Helpful
Report abuse

Nick B
5.0 out of 5 stars Good novel, lots of new information
Reviewed in the United States on January 15, 2013
Verified Purchase
Fear to Tread covers what is likely the most important battle in Blood Angels history because it exposed to the IX Legion the flaw that was part of them. However, this book explores that the flaw was not caused by the death of Sanguinius, but rather was a part of their (and The Angel's) genome to begin with.

While many people seem to dislike James Swallow, I found that his writting style was engaging and that it was enjoyable. I can easily forgive any British military terms considering where 40k started, but he does have a tendancy to overuse the word "divot" as one other reviewer pointed out where he could have instead used other similar words a bit more. The book is slow to start, but it builds up in a steady manner and keeps suspense at key parts.

The only downside to the novel is that it is somewhat predictable (most Horus Heresy novels will be to an extent) due to the fact that the Black Library fleshed it out with previous works long ago. That said,a lot of new knowledge is added. I especially felt the personalities of each of the characters was developed, as well as the sense of loyalty that the Astartes have. This is a good read for any 40k fan, especially those of the Blood Angels.
Read more
One person found this helpful
Helpful
Report abuse

Netharos
4.0 out of 5 stars A Worthy Entry in The Series
Reviewed in the United States on December 3, 2012
Verified Purchase
It's no First Heretic, but nonetheless a good read. The narrative does a satisfying job of answering what the heck the Blood Angels were up to when the Heresy broke out. The plot itself is pretty interesting, and involves a massive voyage into an unknown trap, which brings the Blood Angels face to face with the manifestations of Chaos. That's right: C-h-a-o-s; as in it's finally addressed by it's rightful name this time around. After numerous HH books where they sort of skirt around the issue, this one delves right into the heart of the matter, much to the shock and disbelief of the Astartes marines. One of the most interesting elements in the book is seeing how the secular-tempered Space Marines desperately struggle to find a rational explanation for what is happening around them. Even better, the machinations of both Khorne and Slaanesh play an active role in the conflict, and we begin to see the shape of wars to come as the Heresy develops further.

The characters are, by and large, standard issue Space Marines. Two exceptions to that are Apothecary Meros, and the primarch Sanguinus himself. The primarchs tend to be the most colorful characters in any of these books, and Sanguinus is no exception. He stands out in particular as being more empathetic to the human plight than any of the other trans-human "gods" shown so far. Unlike many of the other legions, the Blood Angels seem not to have forgotten who it is they're fighting to protect. They are also marred by a secret tragedy, and this bitter irony lies at the heart of the story, and characterized very poignantly as the tale unfolds. In my opinion, a good HH novel demonstrates how a legion's identity is unique within the universe, and to that effect, this novel succeeds on many levels.

This is definitely not a character-driven novel though. There are no Garviel Lokens or Argel Tals to be found. What keeps this one entertaining is the sense of a journey and ever-growing descent into madness. There are also some nice cameos from other characters we haven't seen in awhile, but I won't spoil that. Basically, if you love the Horus Heresy series as much I do, you're going to read this one. If you haven't read them all, this is one of the better ones out there.
Read more
One person found this helpful
Helpful
Report abuse

Pumpkinpoy
5.0 out of 5 stars Perfect book.
Reviewed in the United States on February 20, 2018
Verified Purchase
One of the best books in the Horus Heresy series. Features an equal amount of character building, action, and overall plot advancement.

Sanguinius really shines as a character and truly cements the entire story. This is a MUST buy.
Read more
Helpful
Report abuse
See all reviews

Donna Goodson
5.0 out of 5 stars a great addition to the bookshelf
Reviewed in the United Kingdom on June 18, 2016
Verified Purchase
another in the series. my son has most of these and loves them all, a great read, superb characters and great storylines. you need to have a good selection of these on yr bookshelf
Read more
Report abuse

Neil
5.0 out of 5 stars Blood Angels face their biggest challenge yet
Reviewed in the United Kingdom on August 21, 2019
Verified Purchase
Brilliant writing, great story, I'd love these to be made into TV. Game of Thrones eat your heart out...before something from the immaterium does!
Read more
Report abuse

P. m
5.0 out of 5 stars This could be a movie
Reviewed in the United Kingdom on September 12, 2017
Verified Purchase
Simply awesome you could write this into a movie and smash the box office with it. Hats off to the author
Read more
Report abuse