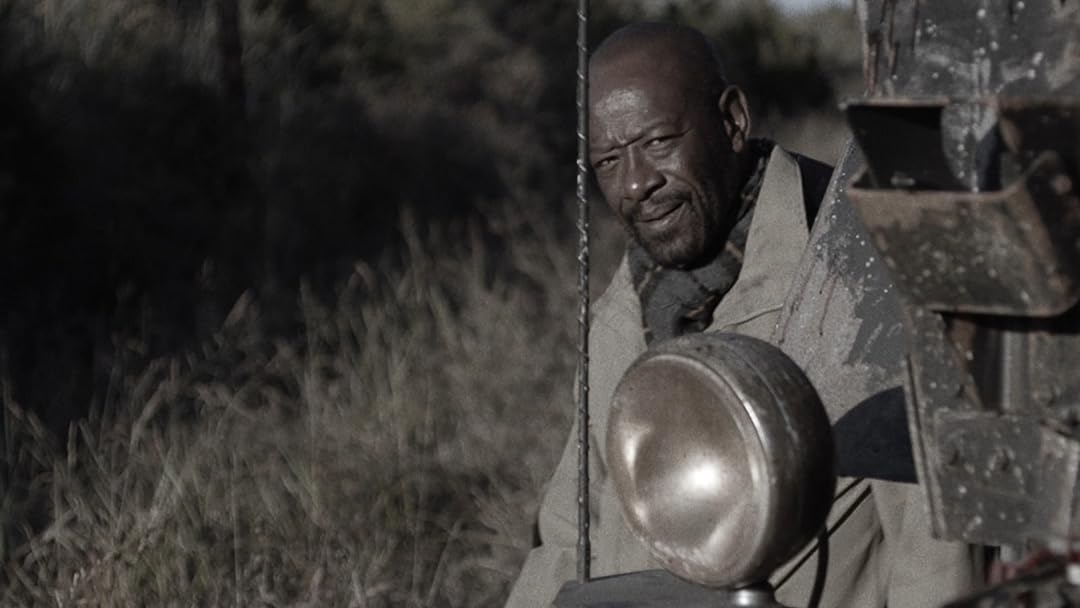 (10,854)6.92018X-RayTV-MA
The Walking Dead and Fear the Walking Dead worlds collide as Morgan Jones crosses into the new world of fear for an all-new adventure with Madison Clark and her family featuring new characters, foes, threats and everything in between.

MovieskinnyReviewed in the United States on October 16, 2021
5.0 out of 5 stars
10 outta 10 dead ones
Verified purchase
The Walking Dead was still alive and well in season 4. Not until season 7 did the show really turn into the walking dead. You'd figure people would be better at surviving in a world of survival horror, but they got worse at it as time went on. Characters ended up like the walking dead, potential victims wandering aimlessly.

Enough about future lameness, Season 4 is still classic tv and great Walking Dead. I have DVDs, Blurays, and Amz video of many of the various seasons for various devices. TWD was not the number one show TV for no reason. Season 4 also features one of the creepiest survival episodes of the entire series, TERMINUS THE SANCTUARY FOR ALL. Try it.

Amazon CustomerReviewed in the United States on July 9, 2020
5.0 out of 5 stars
I love this show
Verified purchase
Another strong season with lots of opportunities for character focus and growth, especially when the group is forced apart mid-season. Some new characters introduced while we of course lose others. The plot revolving around the Governor makes you sympathetic to him and almost like him until your reminded he's a psychopath. Once the group separates and allows the focus to rest on certain characters in each episode, it really explores who they are and what they have become. I'm not sure I would think it a good idea to go to a place called "Terminus" but they are desperate, and the season ends on a cliff hanger.

Kiki911Reviewed in the United States on August 14, 2015
5.0 out of 5 stars
Best Season yet
Verified purchase
This show absolutely floors me. At the end of every season, I tell anyone who will listen that this was the best season EVER in the history of television. But I honestly have to say that of all of them, Season 4 by far outshines them all. It's gripping and emotional, tearing at the heart strings and leaving you breathless. My favorite episode, "The Grove" left me literally sobbing. These actors, the writing... it's just so much more than a zombie story! It breaks my heart that they aren't recognized for the great work that they're doing because of the genre they're in. Three of my friends and my 74 yr. old mother all said, "Nah, I don't want to watch a ZOMBIE show." I got them to watch a single episode and suddenly they were binge-watching all 5 seasons! Bravo and Thank you, TWD cast & crew!
11 people found this helpful

Mark ZReviewed in the United States on October 13, 2021
5.0 out of 5 stars
It’s Rick frickin’ Grimes!!
Verified purchase
Amazon sent me the Canadian version I guess, since my Blu-ray copy has French below the English lettering for the front and back.

I took a chance and it still works for my Sony Blu-ray player from 2011, which isn’t too surprising since Canada uses NTSC too….

The digital codes, although only work for VUDU, still worked! That’s awesome!

Catch up with the Grimes’s as Season 4 takes you deeper into the wacky underworld that is The Walking Dead.

If only I could get ol’ Grimey to sign this copy for me…Come back Grimey!!! I mean Andy!!!!

G VandermarkReviewed in the United States on March 11, 2014
4.0 out of 5 stars
Very entertaining but frustrating story elements
Verified purchase
I find this season's episodes very entertaining for the most part, beacause of the development of strong interpersonal relationships between characters who are generally likeable, even if flawed, like ourselves. However, the zombie/character interactions continue to be absurd at times. The ability of the bumbling zombies to surprise characters and kill or nearly kill characters is implausible, especially after a few seasons. Still characters haven't learned to be overly cautious or take common sense precautions. Examples: opening doors when apparently assuming everything is fine on the other side; never closing doors behind themselves, especially when being pursued by zombies; not vigilantly looking around or standing back to back when traversing the country side; not using load noises to test whether zombies are nearby like in a closed room, to provoke the zombies to grunting and growling and noisily ambulating; not having determined which weapons are the best for fighting zombies and under what circumstances to use particular weapons; not always creating barriers, like at the doors they use to enter and exit a home/ haven (but they are being used more now); etc. By now fortified villages could have been built with concrete walls, gates within gates to limit all-or-none zombie invasions into residential areas.
But in spite of these shortcomings I find the show very entertaining, I just look past the shortcomings.
4 people found this helpful

IreneReviewed in the United States on May 27, 2014
5.0 out of 5 stars
Such a well written show!
Verified purchase
My daughter and I are late bloomer fans of The Walking Dead. We saw the last 4 episodes of Season 4 first, on AMC, then went to Netflix for Seasons 1, 2 and 3. So now we are on Amazon for Season 4. This show is so well written. They manage to make the end of civilization as we know it believable, as believable as zombies taking over can be. Humans die and become zombies because of a virus we all carry, the zombie can only be destroyed by destroying the brain. Bands of humans are traveling together, becoming like respective families in their quest for shelter and safety. But not ALL humans left are good, honest or kind. Intriguing, engrossing, graphic, with the best horror make-up I've seen in awhile. It is shot in Georgia, and the beauty of that state is something I did not know until this show. The actors have grown into their characters very nicely and we, the audience, care about each of them very much. The writers are not afraid to have some of our favorite characters "change" and have to be destroyed either. AWESOME SHOW! And thanks Amazon, would have been so sad to miss Season 4!
One person found this helpful

for your informationReviewed in the United States on March 1, 2016
5.0 out of 5 stars
The best season so far
Verified purchase
With over 6,000 reviews already, there is no need for me to write a review. However after finishing Season 4, I wanted to let people know that this was the best season. Don't get me wrong. Season 1, 2, and 3 are awesome and not to be missed. But two scenes from season 4 made this the best (so far). 1) Carol and the girls. Amazing what she had to do. 2) the very last scene of the season when Rick takes over as the leader again and foreshadowing what will happen to Terminus people. Along with these two exceptional scenes, Daryl takes a huge step into the spot light next to Rick. Carl, Beth and Michonne are also excellent support and great multipliers to the story. The new additions were perfectly added (and removed from some). Now, Glenn and Maggie are loosing steam and not as interesting as before. Overall, looking forward to season 5.
2 people found this helpful

50-ish coupleReviewed in the United States on April 30, 2014
4.0 out of 5 stars
Entertaining escape at the end of a workday
Verified purchase
My tastes and those of my husband usually differ quite a bit, and we both like it, so the show obviously has something appealing for a broad range of people. While I wish the dialog was better and I have an issue with some of the characters, which I'll mention in a minute, I think that is overtaken by other positives. The show has an interesting dramatic setting, no kidding! I'm sure the team behind it wouldn't have been able to get the money for it if it weren't a zombie apocalypse show, but it is more a situational drama. There is an interesting variety of characters for the most part, well-fulfilled by actors who are not unattractive shall we say, though not a Barbie/Ken way. Zombie movie elements aren't completely left out. You still get that juicy scary-gory suspense that will be fun for some people but off-putting to others. Every episode there is a new character you don't care about who gets eaten, and every once in a while you lose a main character -- oh, no!! so sad =(. You have good guys and a really bad guy, who we can't wait to finally get eaten. An episode most often ends with a cliffhanger. Those from the south GA/north FL area will get a kick out of location details. My favorite is an implicit joke about Kudzu -- the crew goes out looking for supplies and finds a structure covered by a jungle of Kudzu that has already grown over so thick since the apocalypse that zombies can't even get out, until the crew hacks through, with great difficulty.

There is only one true negative that I am compelled to mention, and I don't look for this sort of thing. There has been a noticeable lack in numbers and of depth provided to ethnically minority characters, and where there have been, they have generally been stereotypical. There has been an Asian man who is one of the two main characters from the beginning, so kudos there. But there were no significant Hispanic or African-American characters until season 3. Even then, those have been two tough-chick women and a bad guy with a gun. So far in Season 4, we now have two good-guy African-American male characters, but they are not positive characters. I can't believe the stupidity of the writers and everyone else in charge of the show on this aspect.

That aside, I think most people will have a great time watching this show!
See all reviews
Back to top
Get to Know Us
Make Money with Us
Amazon Payment Products
Let Us Help You
EnglishChoose a language for shopping. United StatesChoose a country/region for shopping.
© 1996-2021, Amazon.com, Inc. or its affiliates