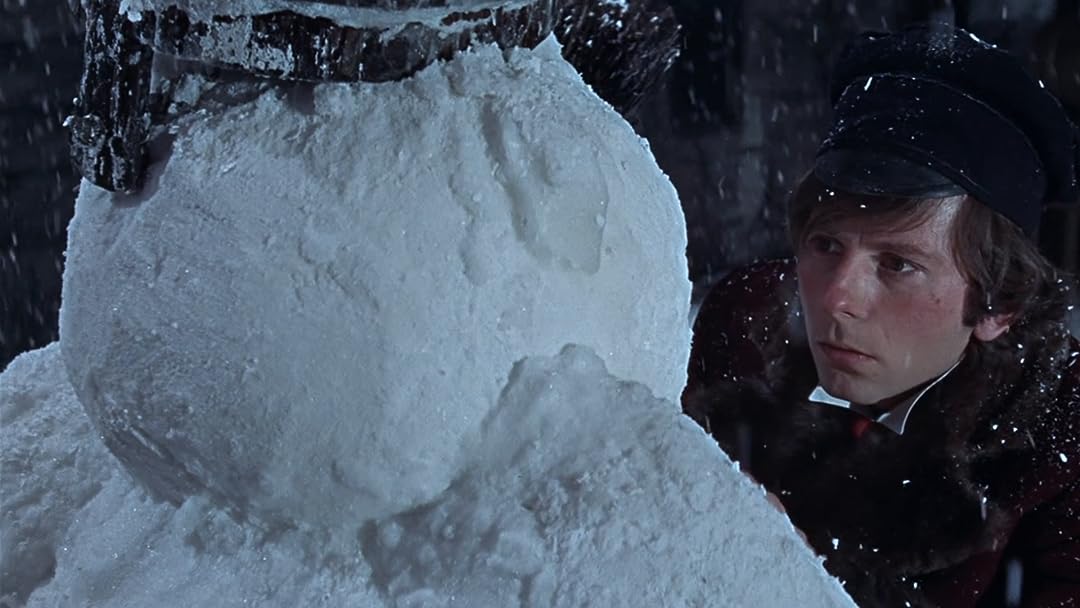 (2,608)
1 h 47 min1967NR
An expert on bats, Professor Abronsius and his dim witted assistant ,Alfred,travel to Transylvania to try to find and destroy vampires.

Mark N.Reviewed in the United States on January 27, 2020
5.0 out of 5 stars
"The Fearless Vampire Killers " is pure genius and a must have film!!
Verified purchase
This movie is pure genius. It mirrors other horror movies of its kind, yet it still stands on its own as a witty and well acted vampire flick that is unlike anything you've ever seen. The plot is simple. Two vampire hunters, Professor Abronsius (Jack MacGowran) and his assistant Alfred (Roman Polanski) travel across a picturesque, moonlit, snow covered Transylvania countryside stopping at a suspicious looking inn run by man named Yoyneh Shagal (Alfie Bass, who is a delight in this film) and his family. Yoyneh falls victim to the count and takes refuge at the castle. The next evening Alfred and Abronsius witness the innkeeper's daughter, Sarah (Sharon Tate), being kidnapped and whisked away to a castle by a vampire named Count Von Krolock (Ferdy Mayne). But before that happens, Alfred falls in love with the beautiful and beguiling Sarah which prompts he and the professor to go to the castle in an attempt to liberate her from the clutches of the vampire Count. The scenes at the inn and later the castle harken back to the mad capped chases of early 20th century silent films and are some of the wittiest I've seen of this or any genre. Once at the castle they meet the Count, his son Herbert Von Krolock (Iain Quarrier) and the Count's hunched backed servant Koukol (Terry Downes) . Alfred and Abronsius are shown to their rooms in the castle and it's then they meet the Count's effeminate son who takes an instant liking to Alfred. Alfred later discovers that Sarah is being groomed to become a vampire and the plot accelerates to Alfred and Abronsius covertly stumbling across a host of vampires exiting their graves to attend a ball where Sarah will be groomed for her new life as a vampire. Alfred and Abronsius plot to kidnap Sarah and escape the clutches of the Count and his hoard of the undead............ This movie does have its proverbial thorn. On August 8th 1969, about two years after this film was released and while Polanski was in Europe on a film, Sharon Tate, who at that time was 8.5 months pregnant with Polanski's child, and four other people were brutally murdered by the Charles Manson gang. Manson chose that residence because he had tried to get a record contract with producer Terry Melcher who had previously rented that home. Unbeknownst to Manson's gang , Melcher wasn't there and the rest is history. I had the misfortune of seeing online the actual photos of the murder scene and victims. I cannot help recalling those horrendous images whenever I watch this film and that, for me, casts a bit of a pall over this movie. Aside from that " The Fearless Vampire killers is a "must-have" and I very highly recommend this movie!!
20 people found this helpful

Uncle BruceReviewed in the United States on July 7, 2018
5.0 out of 5 stars
Fabulous cast. Wonderfully funny film. (There's a sad historical note.)
Verified purchase
One of my all time favorites. So funny, such wonderful characters, including Polanski himself. So colorful, such fitting original music — downright enchanting. And sadly, though, this is the film where Polanski met Sharon Tate. You can see why he fell for her.
There are only two bad bad things relating to the film: its stupid secondary title, Pardon Me my … and the trailer is the worst piece of garbage I've seen in a long time, but it helps one appreciate Polanski's comic genius.
27 people found this helpful

J. HoveyReviewed in the United States on June 27, 2020
5.0 out of 5 stars
Pristine Blu-Ray Picture
Verified purchase
Not going to comment on the movie as it is one of my favorites for so many reasons! A great blend of humor and horror in a fun vampire story. But I was amazed as I sat watching it how clean the picture is ... having only viewed it on my old DVD print and in the theater upon initial release. The colors are saturated but not overly done and there is literally "no grain". Not sure why as this is an old flick but they did an amazing job on clean up and restoration. Even the blacks are dense and clean. Overall, very happy to have such a pristine version of this movie.
8 people found this helpful

James A. CollardReviewed in the United States on October 12, 2020
5.0 out of 5 stars
This Is The European Version Of The Film
Verified purchase
There is good news and bad news about this product. The bad news is that you will need a region-free Blu-Ray player to view the film.

The good news is that Spanish-produced Blu-Ray is the original European version. What follows is from Sam Wasson's "The Big Goodbye," and is primarily about the making of "Chinatown," which Roman Polanski would later direct. When Polanski first arrived in Los Angeles he brought the rough cut of "Fearless Vampire Killers" with him to screen for Marty Ransohoff, the producer of the film. Ransohoff hated it and went about making changes that he believed would appeal more to American audiences. He slashed 20 minutes from the film, re-dubbed actors' voices to make them sound more American, cut the musical score, and installed an INANE (Wasson's word) cartoon prologue.

As I did not purchase the "Region 1" Blu-Ray of the film I cannot say which version of the film it is. But I can attest to this one from Spain as being the European version. And, yes, the spanking scene is back. Sharon Tate would be so pleased.

Phyllis StricklandReviewed in the United States on September 7, 2015
5.0 out of 5 stars
Memories...
Verified purchase
First saw this on late night tv in the early early 70's at the age of maybe 8 with my grandmother. I've always been a night owl and a horror movie fan and my grandmother...being 1 of the 2 most awesome grandmothers anyone could ask for...indulged me!! So not only is this a great mix of horror and comedy (my other love) but it brings back great memories of my Nan and I know she's probably sitting on the couch, trying not to fall asleep, watching right along with me in spirit!!
53 people found this helpful

Britt Le BonzoReviewed in the United States on December 10, 2019
5.0 out of 5 stars
A Fine Tribute To Hammer's Dracula Films
Verified purchase
I've always loved this film. It looks tremendous on Blu-ray. It is a spoof of Hammer's Dracula films and particularly Christopher Lee's interpretation. This won't appeal to everyone. It has a dry, sophisticated wit and is not crude, slapstick comedy - what many today desire. If you are a fan of the Hammer Dracula films and Mr. Lee - I recommend it highly. The art direction and photography are first rate. Blu-ray copies tend to disappear fast and are then difficult and expensive to locate. This is available now at a reasonable cost, so (if interested) buy one before they are gone.
10 people found this helpful

shawn michael loweryReviewed in the United States on February 12, 2021
3.0 out of 5 stars
MEHHH. Overhyped.
Verified purchase
I'd heard it was a classic horror comedy and a must watch for any horror fan................I must've been watching a different movie. While not completely terrible it certainly didn't live up to the hype. Polanski's character was the biggest problem with me. Man he was terribly written and just annoying. I kept asking myself. "I'm sposed to be rooting for this guy right?" Most of the fellow cast were good to great but bad dialogue ( Is there an echo? Why are you REPEATING everything just told to you?)and props ( balsa wood coffins? C'mon man.) plus again Polanski's awful performance ( cowardly,inept,and pervy to the point of cringy.) really brought its rating down in my opinion. Rather watch Captain Kronos or just about anything made by Hammer studios.
2 people found this helpful

Morpheus BlakReviewed in the United States on April 7, 2020
5.0 out of 5 stars
Absolutely stunning restoration!
Verified purchase
I'll keep it short and simple- This is an absolutely stunning restoration, and if you love this film, then this is a significant upgrade from the DVD. The detail is crisp and gorgeous compared to the DVD- all dirt and damage that was marring every frame of the DVD edition has been fixed to absolute pristine perfection. The blacks are rich, the colors are incredibly rich, again, all significant improvements from the DVD edition. I did an extensive A/B comparison once I got the Blu-ray, and I am so glad that I decided to upgrade, as the studio did a magnificent job with this. It's the end-all way to watch the 'Dance of the Vampires'!
2 people found this helpful
See all reviews
Back to top
Get to Know Us
Make Money with Us
Amazon Payment Products
Let Us Help You
EnglishChoose a language for shopping. United StatesChoose a country/region for shopping.
© 1996-2022, Amazon.com, Inc. or its affiliates