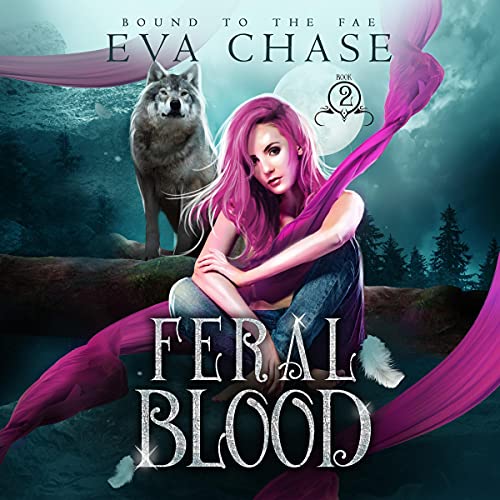 Twice I’ve been kidnapped by the fae.

First were the monsters who ripped me from everything I knew and threw me in a cage.

Next came the men who rescued me and offered me a safe haven.

But my saviors and my former captors have something in common. A decades-old curse holds all the Seelie fae in its grasp, turning them into savage, mindless beasts with the rise of the full moon. Something in my blood cures that rage like nothing else they’ve found. To most of them, I’m nothing but a prize to be claimed.

The fiercely passionate men who’ve taken me in would give me my freedom, but the ones who first stole me will stop at nothing to drag me back into their prison. The already weakened pack that’s welcomed me may not survive a battle.

I didn’t expect to find love among the fae...but I can’t deny the feelings growing inside me. I didn’t mean to get mixed up in a war between them...but here I am. When my newfound lovers leap into the fray to protect me, I won’t let them fight alone.

No matter what it costs me.

Feral Blood is the second book in a new paranormal romance saga featuring possessive wolf shifters, fraught fae politics, and a wounded heroine coming into her own.

4.4 out of 5 stars
4.4 out of 5
481 global ratings
How are ratings calculated?
To calculate the overall star rating and percentage breakdown by star, we don’t use a simple average. Instead, our system considers things like how recent a review is and if the reviewer bought the item on Amazon. It also analyzes reviews to verify trustworthiness.
Top reviews

Whiskey & Wit Book Reviews
5.0 out of 5 stars 🖤🖤🖤🖤🖤
Reviewed in the United States on January 13, 2021
Verified Purchase
Talia may no longer be caged, but her life is not all magenta locks and rainbows. The human blood-bank-Seelie-cure is still being hunted by her former captors. Lord Sylas’s cadre-chosen are learning that sharing is caring, but their pariah status is still hitting the clan hard, and joining in the war against the Unseelie could be their only chance at redemption.

Bound to the Fae is an original take on Fae and Shifter Fantasy and this second installment, Feral Blood, turns this reverse harem series molten!

*Note – Do I love Whitt, Sylas, August, and Talia? Yes. Is there an EXCEEDINGLY small secondary character that gives the MCs a run for their money? Yes… Astrid… Now, that is a woman worth getting to know!

carlottawoolcock
5.0 out of 5 stars Upheaval and change!
Reviewed in the United States on January 9, 2021
Verified Purchase
Eva Chase writes about love, different kinds of love than some in our society may be comfortable with. She does it well, and naturally. This story has 4 main characters, the woman heroine who is rescued and taught about love by three very different fae men. The series shows how that love between people/fae/shifters can overcome exploitation and prejudices. Most important though is the underlying lesson of listening and learning from each other is the most honorable way of being.
Read more
2 people found this helpful
Helpful
Report abuse

Erani Kole
VINE VOICE
3.0 out of 5 stars it’s ok…
Reviewed in the United States on September 18, 2021
Verified Purchase
Content 3 for the heroine being able to sink into pack life and figure out how to get all three guys while surviving the suspicious pack members of her last captor.

This was okay. I love the sex scenes. Love em to pieces. The story reads slow sometimes because I almost never see why exactly she is a cure for them. I want to know more about HER, not the drama and constant well-meant promises that almost never get kept for the sake of entertainment. I’d like to see her get kept safe once on a promise that can actually hold true.
Read more
Helpful
Report abuse

Startime
5.0 out of 5 stars More trouble and a bit of love
Reviewed in the United States on September 13, 2021
Verified Purchase
Talia is starting to feel comfortable with her position in the pack, and with her men, all three of them. War with the Unseelie is not going well, and they have discovered what happens to the Seelie at the full moon, how they found out no one knows, but plan to attack the Seelie at the full moon. Boy are they in for a big surprise! Twists , a solid storyline, and wonderful characters make this another excellent read.
Read more
Helpful
Report abuse

Morgan Haynes
5.0 out of 5 stars Eva Chase Stuns Again
Reviewed in the United States on January 21, 2021
Verified Purchase
This is just me, counting down the time until book three comes out and crying because it’s more than a month away.

Book Two in the Bound to the Fae series was just as stunning as the first. We see our favorites heroines relationship grow with her captors-turned-lovers, and the slow burn in this series is achingly delicious.
Read more
Helpful
Report abuse

JM
4.0 out of 5 stars Even better than the first one!
Reviewed in the United States on December 17, 2021
Verified Purchase
4.5 Stars
Even better than the first one! I loved getting to know the characters more and learning more about the world. My one qualm is that I wish the big battle had been expanded. There was so much build up I expected it to last a bit longer! But aside from that, and without giving away anything, there was so much more I just loved! Can't wait to start on book 3, Kings of Moonlight!
Read more
Helpful
Report abuse

Lily
2.0 out of 5 stars Ok
Reviewed in the United States on October 1, 2021
Verified Purchase
I was disappointed by the actions of the main characters. Talia seems to make rash decisions putting everyone at risk. Her character is also extremely selfish in her intimate relationships. Talia is also very greedy and always wants more than she has. All of these reasons are why I found it difficult to enjoy this story.
Read more
Helpful
Report abuse

Kasey M. O'Connor
5.0 out of 5 stars Can’t get enough!
Reviewed in the United States on September 10, 2021
Verified Purchase
I can’t get enough of this. I would say the ‘battle’ to keep Talia seems underwhelming especially considering their famous cruelty. The battle between Talia and her 3 attackers I felt was also too short. She’s training, but not putting the skills to use. Anyways despite that it was a great story.
Read more
Helpful
Report abuse
See all reviews

Rosbath
5.0 out of 5 stars Feral blood.
Reviewed in the United Kingdom on October 22, 2021
Verified Purchase
I'm really enjoying this series so far. It has a story line to it and strong characters. It is well written, flowing well and hard to put down. Gonna grab the next one now.
Read more
Report abuse

Leigh
5.0 out of 5 stars Love this series
Reviewed in the United Kingdom on August 8, 2021
Verified Purchase
I'm enjoying this light hearted RH. A nice read and I am a little in love with ambrose. On to book 3.
Read more
Report abuse

Amazon Customer
5.0 out of 5 stars Kindle customer
Reviewed in the United Kingdom on May 11, 2021
Verified Purchase
I love this series of books so far I can't wait to read book three. I would highly recommend them all
Read more
Report abuse

SBChaudhury
5.0 out of 5 stars Extremely enjoyable🥰
Reviewed in India on October 24, 2021
Verified Purchase
As Talia's romantic relationship continues to deepen with Sylas, August and Whitt, there is no shortage of people vying to tear them apart. As soon as one enemy is defeated another more powerful enemy springs up to takes its place. I have loved reading about Talia's growth from an abused and traumatized woman to strong, confident one. Talia was never weak though. Even when she was captured, her tormentors failed to break her spirit for almost nine years and she almost escaped with only her wits & a tiny bit of magic she never knew she had. Her powers are growing and I can already see that she's gonna be a force to be reckoned with. Off to read the next one. ❤️
Read more
Report abuse
See all reviews
Back to top
Get to Know Us
Make Money with Us
Amazon Payment Products
Let Us Help You
EnglishChoose a language for shopping. United StatesChoose a country/region for shopping.
© 1996-2022, Amazon.com, Inc. or its affiliates